Project MKULTRA (or MK-ULTRA) was a secret CIA program to research mind control and chemical weapons/interrogation tools via the use of drugs such as amphetamine,

the MKULTRA project dosed thousands of suspecting (such as Ken Kesey

) and unsuspecting people, including foreign nationals, with drugs in an effort to find either an interrogation tool or mind control weapon. The project was so horrifying that even the extremely pro-torture Conservapedia condemns it.[4]

The project was not solely focused on LSD. Experimental subjects were subjected in various sub-projects to experiments involving sensory deprivation, sexual abuse (including rape), verbal abuse, and other forms of psychological manipulation. The CIA was particularly focused on eliciting an experience of "self-blame" in the victim of experiments, bringing them to believe that they were actually responsible for the methods employed upon them rather than the torturers. The CIA discovered that a permanent altering of behavior was possible with minimal to no physical contact with the subject, hence leaving no evidence of abuse. The primary goal was to determine and undermine every aspect of the target's sense of self: cultural, sexual, physical, emotional, and sociological.[5]

Theodore J. Kaczynski, the "unabomber," was a famous experimental subject during his time at Harvard.[6] He ostensibly signed up to be a subject of a research project involving academic criticism, but was instead subjected to several weeks of intentionally designed experiments wherein subjects were denigrated many hours a day by professors and graduate students. The goal of the experiment was to test a subject's tolerance to the stress of humiliation by people who are intellectually and authoritatively superior.[7] He went on to proudly list his "awards" in life as "eight life sentences [for murder]" in the Harvard alumni directory.[8] 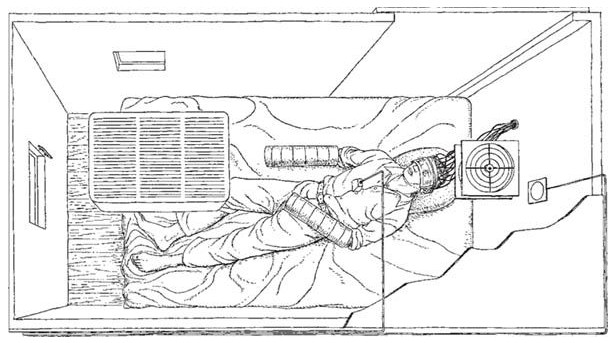 One of many experiments conducted on sensory deprivation during MKULTRA. Subjects illustrated above were paid to lay with padded hands, muffled ears, and blindfolded eyes in a small white lighted room twenty-four hours a day in an effort to understand the psychological effects of full sensory deprivation. Many subjects refused to continue the experiment after a few days.[5]

MKULTRA partially merged with other projects exploring the exploitation of the populace en masse via communications technology and mass media. Though propaganda techniques had been employed for hundreds of years, the United States wanted to learn, as the Soviets had been doing, how to both exploit the individual and the populace which the individual was within.[5]

(described by the good folks at Cracked.com as the government's "Bill Cosby Division"[9]) was a tandem program that involved hiring prostitutes to lure and seduce men then secretly drug and rape them in hopes of extracting information and inflicting sexual humiliation.

Dr. Cameron and the Montreal Experiments[edit]

, a Scottish-American psychiatrist who experimented on non-consenting patients at the Allan Memorial Institute at McGill University in Montreal, Canada. Between 1957 and 1964, Cameron and his assistants subjected patients to a variety of "de-patterning" exercises, including electroshock therapy, use of LSD, injections of thorazine and insulin (to deliberately induce coma) and playing of repetitive messages to "rebuild" their personality. At least 300 patients were victimized by the "Montreal Experiments," many suffering lifelong amnesia, psychological regression and other mental effects.[10][11]

The project soon spiraled out of control; reports state that the CIA agents involved in the project were not only holding private LSD parties but were also dosing each other with drugs in the office. One such agent, Frank Olson

, leaped to his death from a 10th floor hotel window a week after receiving an LSD cocktail and trying to quit his job after realizing all his wrongdoings. Due to the incomprehensibly callous and seemingly surreal nature of the program, it was soon latched upon to hyperbolic extent, but has not reached the same degree of consciousness among the general public as many more mundane and less important historical events have.

A brief introduction to all that is known of the program with any certainty (aside from what's been declassified[12][13][14]), was given in opening remarks by Senator Ted Kennedy at the 1977 U.S. Senate MKULTRA Hearings:[15]

Some 2 years ago, the Senate Health Subcommittee heard chilling testimony about the human experimentation activities of the Central Intelligence Agency. The Deputy Director of the CIA revealed that over 30 universities and institutions were involved in an "extensive testing and experimentation" program which included covert drug tests on unwitting citizens "at all social levels, high and low, native Americans and foreign." Several of these tests involved the administration of LSD to "unwitting subjects in social situations."

At least one death, that of Dr. Olson, resulted from these activities. The Agency itself acknowledged that these tests made little scientific sense. The agents doing the monitoring were not qualified scientific observers. The tests subjects were seldom accessible beyond the first hours of the test. In a number of instances, the test subject became ill for hours or days, and effective followup was impossible.

Other experiments were equally offensive. For example, heroin addicts were enticed into participating in LSD experiments in order to get a reward — heroin.

Perhaps most disturbing of all was the fact that the extent of experimentation on human subjects was unknown. The records of all these activities were destroyed in January 1973, at the instruction of then CIA Director Richard Helms. In spite of persistent inquiries by both the Health Subcommittee and the Intelligence Committee, no additional records or information were forthcoming. And no one — no single individual — could be found who remembered the details, not the Director of the CIA, who ordered the documents destroyed, not the official responsible for the program, nor any of his associates.

We believed that the record, incomplete as it was, was as complete as it was going to be. Then one individual, through a Freedom of Information request, accomplished what two U.S. Senate committees could not. He spurred the agency into finding additional records pertaining to the CIA's program of experimentation with human subjects. These new records were discovered by the agency in March. Their existence was not made known to the Congress until July.

The records reveal a far more extensive series of experiments than had previously been thought. Eighty-six universities or institutions were involved. New instances of unethical behavior were revealed.

The intelligence community of this Nation, which requires a shroud of secrecy in order to operate, has a very sacred trust from the American people. The CIA's program of human experimentation of the fifties and sixties violated that trust. It was violated again on the day the bulk of the agency's records were destroyed in 1973. It is violated each time a responsible official refuses to recollect the details of the program.

After the program was terminated, many of the victims attempted to take legal action against organisations involved in MKULTRA. In 1980, nine former patients began a class action lawsuit against the CIA, settling in 1988 for just over US$ 80,000 each. 77 of those subjected to MKULTRA experiments in Canada were offered compensation by the Canadian government in 1992, but many more were denied compensation and some later brought their own lawsuits. Another Canadian, Jean Steel, launched legal action in 2015, receiving C$ 100,000 two years later.[16]

MKULTRA was stopped in 1973 but it continues to be cited as evidence for further unspecified CIA nefariousness by conspiracy fans. Every event that could conceivably have been contrived by the CIA — school shootings, for example — becomes, in their minds, a false flag MKULTRA operation whose actual intent is sinister and anti-democratic. Perhaps unfortunately, documents leaked by Edward Snowden and published by Glenn Greenwald now establish as fact that the US intelligence community is both willing and able to perform a wide variety of false flag operations, lending a temporary measure of credibility to claims like this.

The full extent of CIA research will never be known due to the deliberate suppression of most of the evidence regarding the project by the CIA when they burned most of the papers produced by the program (except the ones regarding LSD as these made government scientists look the most incompetent and hence the program less remarkable).[17]

Project Monarch is supposedly a program under MKULTRA that involved satanic child abuse. Literally no evidence supports the existence of the program; according to Jodi Dean, "scholarly and journalistic treatments of MK-ULTRA make no mention of a Project Monarch".[18]

News that the CIA conducted crazy mind control experiments involving psychoactive drugs wound up being catnip not just to conspiracy theorists, but also to every screenwriter in Hollywood who wanted to use some real-life conspiracy lore to lend a veneer of sci-fi credibility to their otherwise fantastical plots. Works as diverse as Stephen King's Firestarter, The X-Files, Call of Duty: Black Ops, and Stranger Things have featured MKULTRA or fictionalized versions thereof, either to explain the presence of characters with psychic abilities or to have plots involving sleeper agents sent to carry out nefarious deeds without even them knowing.

The common (false) perception is that U.S. Government scientists are so stupid as to spend over a billion dollars over a period of 20 years incorporating nearly 100 academic institutions to reach the conclusion that LSD is not particularly effective at controlling people's minds (surprise!). In reality, the United States government discovered that psychological torture, rather than physical torture, was far more effective in inducing compliance and eliciting information (both false and true) and long-term pain in a subject.[5]

Sidney Gottlieb, one of the chief participants in the program, was awarded the "Distinguished Intelligence Medal" by the CIA in 1972 for his work on MKULTRA which he claimed rendered, albeit award-winning, "useless" results.[25] Some people take the radical stance that the CIA is not in fact incredibly incompetent to the point of being farcical and used the LSD research to distract attention from parts of the program that were both less sensational and likely far more effective in pursuing the original goals of the program.[5]