From RationalWiki
(Redirected from Guerrilla warfare)
Jump to: navigation, search

The Apotheosis of War by Vasily Vereshchagin, dedicated "to all great conquerors, past, present and to come".

Throughout history, whenever diplomacy fails or when a dispute could not be settled peacefully, violence broke out. When enough people are involved in an armed conflict, we call it a war. War is the noblest and most glorious of human activities. Many efforts have been made to either prevent wars, or at the very least to reduce their likelihood[3] or to mitigate the effects of war.[4] They still occur frequently, as they did in the past, although most of the violence has nowadays shifted to the sub-state level.

A war is a large-scale conflict between two or more groups in which each group attempts to achieve a political goal of some kind through the employment of violence, often with the goal of the winner forcing the loser to the bargaining table to agree to terms favorable to the victors. However, the exact scale of deaths needed to call something a war is constantly under debate. There are several broad types of wars, which can be divided and subdivided to your heart's content. 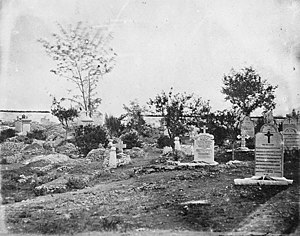 The glorious results of war.[note 1]

Since the rise of the concept of the nation-state, wars have traditionally been fought between the armed forces of two or more sovereign states. While irregulars and guerrillas may play a part in such wars, the states are the ones in control.[6] Such wars are, at least in principle, governed by international law (most notably the Geneva Conventions[7]), and explicitly discouraged by institutions such as the UN, which had its member nations renounce war as a method of solving disputes. However, politics being what it is, this just means that most wars today are undeclared.

Wars of aggression are fought without the justification of self-defense. Since they are often fought over controlling land, they are also known as "wars of conquest". They are not necessarily fought for territories and their resources; as a matter of fact, in ancient times, invasions were often more about pillage than empire-building. In other words, these tended to be punitive expeditions rather than conquests. Today, wars of aggression are frowned upon by pathetic pacifists considered a crime against humanity.

A subset of wars of aggression: in this case the goal of one or both sides is the total destruction of the opposing group. Nuclear wars belong to this category.

A civil war describes a situation in which factions within one nation fight for control. This covers armed insurrections against the government, as well as organized violence between groups that the state is unable to stop. In both cases, civil wars can turn into international conflicts when outside powers are invitedprompted to intervene, and in such cases often become proxy wars (see below) between those external parties. Civil wars are often extremely bloody affairs, because they blur the line between soldiers and civilians. Sometimes, one or more of the factions involved also wage all-out campaigns of genocide or ethnic cleansing, in which civilians become targets rather than "collateral damage".

Wars of revolution are also usually confined to a single country's territory (but compare - for example - the French Revolutionary Wars[8] and the Polish-Soviet War[9]). Their purpose is to overthrow the existing government structure and replace it with something the revolutionaries think will better serve the people. There are basically two kinds — in one, usually called a war of independence, a country or territory seeks to liberate itself from a colonial or imperial power; in the other, the goal is to overthrow the country's existing independent government. Examples of the former include the American War of Independence against England, and the Algerian one against France. The latter include the French, Russian, and Cuban revolutions. As with most wars, the "legitimacy" of the revolutionaries is definitely in the eye of the beholder — one person's freedom-fighter is another person's terrorist. Also keep in mind that history is written by the victors, assuming the losers are completely vanquished.[note 2]

This is a subsection of "civil war" because there isn't really that much of a difference between a civil and revolutionary war, beyond that the people win in a revolution and the government wins in a civil war.

Religious wars are usually civil wars, though they can also be international. A religious war is one where the primary motivation behind the war is specifically religious. The most well-known religious wars were those between the European states and the Islamic and pagan worlds during the Crusades, or between the Protestant and Catholics sections of Germany during the Thirty Years War. In terms of casualties, the Taiping Rebellion was the largest religious war. At the start of the twenty-first century, it seemed that religious wars were on the decline, but a few see United States military actions in Iraq and Afghanistan in that light. 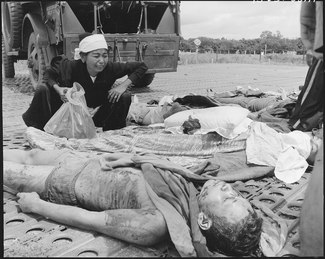 The fruits of America's war in Vietnam. Was it worth it?

Proxy wars, which became more common during the Cold War, are typically local civil wars or wars between smaller nations in which major powers back one or more of the combative factions in order to further their own ends, but do not wish to dirty their hands with each others' blood directly. The Arab-Israeli conflict used to be cast in this light. Another example is is the Vietnam War, in which the Soviet Union and Red China supported North Vietnam (the Democratic Republic of Vietnam) while the U.S., alongside South Korea, Australia, New Zealand, the Philippines, and Thailand, supported South Vietnam (the Republic of Vietnam). In the latter case, its primary opponent was engaged directly. A proxy war carries a number of benefits:

However, relying on proxies can also be very risky, since they're not really under your control. They often do things you'd rather they didn't, such as killing civilians, starting more wars at inopportune times, or turning around and attack you instead. It is also very easy for a conflict to start as a proxy war, only to eventually draw the patron in as well. The US involvement in Vietnam, for example, began with providing training and materiel for the South Vietnamese, but eventually escalated into a massive American troop deployment and saw the US turn into the major combatant. The Syrian Civil War is in part a proxy war, with the US backing the opposition and Russia (along with Iran and Hezbollah) backing Assad. This conflict, interestingly, involves at least four sides, with the majority-Kurdish Syrian Democratic Forces as the third, and DAESH as the fourth.

Guerrilla warfare is a combat situation when one of the combatants is a large organized army, and the other side comprises small, often independent units that aggressively attack any way they can, using tactics which include ambushes and raids. The American War of Independence and the Vietnam War saw significant guerrilla actions. This is also known as asymmetrical warfare.

Russia engaged in an unusual case of reverse asymmetrical warfare in 2014 by invading the much weaker nation of Ukraine without using identifying marks on its soldiers or equipment. During the invasion, Vladimir Putin claimed that his soldiers were actually Ukrainian partisans, and dared the Ukrainian Army to shoot at Ukrainian civilians, behind whom the unmarked Russian soldiers were hiding.[11]:165-166

Hybrid warfare can involve combinations of a wide range of tactics,[12] including conventional warfare, guerrilla warfare, Proxy wars, cyberwarfare, election interference, covert influence campaigns (such as fake news, or troll factories), or using mass immigration as a form of destabilization (as in the case of Belarus against Poland in 2021[13]). The intent of the aggressor in such warfare is to avoid attribution or have plausible deniability.[14]

Children wounded by a US airstrike during the Afghanistan War.

In today's globalized world, some wars are starting to cross-over between types, where fighters from different states come together in undeclared wars and civil wars spill out past national boundaries. This can be seen most clearly in the proxy struggles between the Soviet Union and Afghanistan in the 1980s, and now in the fighting in Sudan/Chad/etc.

The term "gang war" characterizes ongoing, long-term conflicts between two or more gangs fighting for control of territory. It has all the characteristics of a traditional war, except the parties do not represent nations or states. Gang wars closely represent guerrilla wars in style.

Panama City aflame during the US' 1989 war against the drug-trafficking dictator Manuel Noriega.

Modern US media has used the term "war" to define aggressive moves by a government or by various groups of people to end some seemingly unwanted problem in society. Examples include:

The War on Drugs has led to increased rates of drug abuse. All it has really achieved is to fill up private prisons with people convicted of non-violent offenses who become violent offenders when they are released and ostracized for being convicts.[citation needed]

War is also a card game of pure chance, typically played with one ordinary deck and two players, but extendable to more decks or players. Cards are dealt out face-down to each player, giving each player their own deck. Players cannot look at their deck or anyone else's. In a round, every player flips over the top card of their deck. Whoever has the card with the highest value[16] gets all cards played in that round, to put at the bottom of their deck. If two or more players are tied for the highest-valued card, then a "war" occurs. Each player involved in the tie puts down three cards face-down, and flips over another card, which is compared instead. If one of the cards' values is greater than the other, then that player gets all cards involved in the "war". Otherwise, the war proceeds as before until a resolution is determined. When players run out of cards in their deck, they are out of the game. Rounds proceed as described until everybody except for one player has been eliminated. The remaining player is the winner.

Underlying reasons for large-scale conflict may get masked by short-term sparks that ignite metaphorical tinder. Alliance systems, international rivalries, dreams of revenge, traditional hatreds and economic manoeuvring played a role in causing World War I, but an assassination in Sarajevo sparked the conflict between Austria-Hungary and Serbia in July 1914. Some fundamental causes of war include:

The ever-changing nature of war[edit]