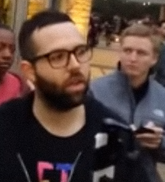 Canales at an alt-right rally.[1]

John Canales,[2] better known as Mouthy Buddha, is a YouTube talker who was openly alt-right[3] and who intentionally dog-whistled in multiple videos.[4] However, Canales stated that he's trying to "walk away" from these alt-right views, and has eventually denounced the alt-right.[5][6]

On October 15th, 2020, the Mouthy Buddha YouTube channel was terminated "due to multiple or severe violations of YouTube's policy prohibiting content designed to harass, bully or threaten."[8]

Canales is friends with William Fears.[9] Fears is an active alt-right activist and was recently arrested and charged with attempted homicide for encouraging a fellow neo-Nazi to shoot into a crowd of protesters.[10]

In addition to the above conspiracy-fueled political ideology, Canales believes in several more specific conspiracy theories:

See the main article on this topic: Jewish Question

Canales produced a series exploring "multiple sides" of the Jewish Question.[19][20][21] Each of the videos spends disproportionately more time (perhaps 4× more) on the anti-Jew "side" than the "Jews are actually normal people" "side". Canales also consistently undermines his own rebuttals to anti-Jew talking points. Indeed, in the "Was Hitler Bad?" video, he utterly fails to debunk his "summaries" of Holocaust denial arguments and Hitler apologist arguments. Instead, he merely ends the video with the following:

But if it's true that many powerful Jews are dangerous to the West, what's the solution? Or are so much of this Holocaust revisionism or supposed Jewish double standards a symptom of spending too much time permeating [sic] one dark corner of the internet?

Whether intentionally or not, Canales' videos ensures that viewers come away believing in the veracity of the Jewish Question and the possibility that some "solution" may be necessary.

Jewish control of the world[edit]

In a deleted video titled "We Are Powerless", Canales laid out many of his ideas about the alt-right and the people who really runs things:[24]

My focus toward critiquing the alt-right has been in bad timing, in that my attention on them has created a self-induced distraction from the real problem in the Western world that the alt-right see crystal clear. And although I stand by every critique I've made of the movement and still struggle with several elements of the ideology, I will be temporarily stopping that series, because after consistently thinking on this and after speaking with many intelligent, trustworthy people, I now feel that my attempts to criticize are falling into the hands of a leftist system that disgusts me, a system that holds all of the power and influence. [Background: Video of brown dots streaming from Africa and the Middle East and turning Europe brown] A system run by people whose goal is to slowly and strategically and incrementally change the face of the West.'

This is not an apology, but merely a nod of the head and an acknowledgement that the enemy of my enemy is my friend. And why do I bring up the alt-right in a video that will be about censorship? Because the alt-right will be the first to get sucked into a YouTube black hole. Google and YouTube sees these people under a banner of ignorance and delusion. In their delusions extend to anyone who holds ideas that are similar [Background: image of TL;DR channel logo]. And I refuse to allow my channel to echo in the same direction.

YouTube is in the hands of the most powerful people in the world. And it would seem that those people have every intention on seeing the West change. And it's more difficult to change when opposing voices are propelled to the top, when an online community continually redpills an entire generation, when the voices on the right dominate its platform, when the alt-right is beloved by its followers, and is consistently growing in numbers, when videos are put out that tell the truth about tremendously sensitive topics but are the truth nonetheless, we, in this YouTube community, are against a system, a system that has the influence and power of Hollywood, of neoliberals, and neocons, of Israel, of an ideology whose core focus is to face the burden of millions of foreign denizens, to force the burden of accepting people into our country that want to destroy it. All logic [sic] points to the idea that we are under attack, and we need platforms where we can speak about these facts honestly, and not be 1984'd into a, quote, "limited state".

But I hope I am overreacting. I hope I am wrong about the powers that be. I hope they really do have our best interests at heart. But when I see the Israeli government say it will pay over three thousand dollars in grants to African refugees as a monetary incentive for them to leave, claiming this move was specifically designed, quote, "to protect the Jewish and democratic character [of Israel]", while at the same time over one thousand rabbis sign a letter in support of welcoming millions of refugees into America, something's not right. The destruction of a society takes place slowly and meticulously. We have to be cautious and wary of the signs.

Canales later said that he was "embarrassed" for the views expressed in the above video and that he, in fact, desired to move away from those views:[3]

My content has become more and more focused on alt-right talking points because in many ways, the mind that I occupy is alt-right. But I don't want to be. I am disgusted with the person I have become. The alt-right, or the way I am when living through the lens of its ideology, is disgusting. I only see differences in groups now. The similarities among people are lost on me.

When I go to the market and see a black man behind the counter, my mind thinks of IQ statistics or white displacement or crime statistics. Everything that separates this person from me. When I hear the word, my mind shutters with antipathy. I am annoyed by the very notion of them. But I don't want to be. I want to be the kinder, gentler person I used to be. I want to see them as human beings. As fellow neighbors of sentience. I want to focus on the qualities of one's character and not of one's race. Because I have always hated the alt-right. And to become what I hate is an indescribable feeling of moral failure and delusion [sic]. I have what seems to be endless empathy for white people. The idea of becoming a minority and told they're racist for being concerned about this hurts me. But my empathy burns out when discussing the well-being of discussing any other group of people.

This is fucked up. What has happened to me is wrong. Think of me as being in recovery from being alt-right.

A week later, Canales released a video in which he refused to choose between the "skeptic community" and "alt-right community", though he still believes virtually all of the views he'd expressed before.[25] He also published a vlog titled, "Walking Away From The Red Pill", in which he described his alt-right time-period as a "state of shock".[5] At length, he asserts that:

The accusations that were being thrown my way, you what I mean, that I was a crypto-fascist, or something, which – that's actually not what I was doing. It actually, what it does is it gives me way more credit than I actually deserve. I'm not this-- I'm not trying to do it calculated, or on purpose. That actually makes me sound, like, really smart, like I think about these things. I don't. I don't. The truth is, I have been getting so wrapped up in an ideology, I can feel myself stuck in it. And I don't like it. I don't like it. I fucking don't like it at all. It's like, all this YouTube stuff has really changed my mind on so many things, and I just feel like, what the fuck am I doing? Why am I doing this? Again, here's the thing: I had this whole video laid out, of, none of those were my opinions, because – dude, like, a lot of them aren't my opinions. Dude, I don't know enough about Hitler to think he was a decent person. But the truth is I don't know enough about any of that stuff. But I am playing with fire, and my own mind is starting to think, "well maybe there is a Jewish conspiracy". I set out to do this topic because I thought it would be, like, really entertaining, you know, really intriguing and stuff.[26]

In the third part of his Jewish Question series, "PART THREE: The Pornography Chambers", Canales appeared to intentionally structure the video as a response to those who called him alt-right or anti-Semitic. Canales spent about 2/5 of the video on the "pro-Jewish-Question" side and 3/5 on the anti-Jewish-Question side.[27]

After months of self-reflection, Mouthy Buddha officially denounced the alt-right on Twitter and stated that he has moved on from it, although, he's still a little soft on it:[28]

Admittedly, I fell for a lot of the fear-based propaganda of the alt-right. I even unknowingly, and knowingly participated in it. But I’m done with that. I see it for what it is. It’s egocentric. It’s division. It’s hatred. The alt-right is poison.

If the alt-right wants to build an ethno-state, I won’t stop them, as I’m for free association. But do it somewhere else, and don’t harm anyone while doing it.

On the eve of the French general election, Canales published a video titled "Why Gays Loved Le Pen"[29] in which he presents "his thoughts" before urging the people of France to vote for the far right presidential candidate. The entirety of the video is a virtually word-for-word recital of a National Review Online article published a day earlier.[30]