From RationalWiki
(Redirected from Divine Comedy)
Jump to: navigation, search

Image from a medieval manuscript of The Divine Comedy which shows a goat centaur patrolling the river of boiling blood.

The Divine Comedy (not to be confused with the other one) is an Italian epic poem written by Dante Alighieri over the course of 12 years (1308-1320 CE). It deeply affected the medieval worldview of the afterlife, effects which that can still be seen today. The poem details Dante being escorted through Hell and Purgatory by the Roman poet Virgil, and through paradise by an old love, Beatrice, after being lost in the dark forest of sin. It has been said that it represents allegorically the soul's journey towards God.

Despite being a religious poem, which discusses sin, virtue, and theology, Dante also discusses several elements of the science of his day, especially physics and astronomy. He discusses the importance of the scientific method and the implications of a spherical Earth, despite adopting a Ptolemaic cosmological system.[1] Many scientists and philosophers from Galileo to Newton have been influenced by the work.

The Divine Comedy was not meant to be taken literally; it was intended as an allegory; each canto contains many alternative meanings. Dante's allegory, however, is more complex, and, in explaining ways to interpret the poem – see the Letter to Cangrande[2] – he outlines other levels of meaning besides the allegory: the historical, the moral, the political, and the philosophical.

Dante's poem has also been controversial due to the fact that many greedy popes and cardinals are sent to Hell in the Inferno for their crimes of simony. Among these figures include Pope Nicholas III, Pope Boniface VIII, and Pope Clement V.[3] Dante also sends Pope Celestine V into the vestibule of Hell in the Inferno, whose "cowardice" served as the door through which so much evil entered the Church".[4] Dante criticises the greedy corruption of the Church and many of its leaders.

Dante also supported the separation of church and state; which was progressive for a man born in 1265. Dante outlines his idea in De Monarchia (the work is in Latin). The treatise was so controversial it was banned by the Catholic Church. [5]

The poem starts on the Thursday before Good Friday with Dante becoming lost in a dark forest often seen as a representation of sin in comparison to the straight way. Dante states he is halfway through the journey of life; Biblically, this is supposed to be 70, so the readers can infer he is 35 at the time.[6] After getting lost, Dante attempts to climb a mountain to find his way but is chased by a leopard, lion, and she-wolf. These represent allegories as well:

Dante is then chased into a cave where he meets Virgil and the story rightly begins.

The most well-known part of Dante's epic poem due to its intense and imaginative imagery. There are 9 circles of hell, often grouped into three perversions of love.[7] Violence is split to an additional 3 and fraud has an additional 10. Dante obviously had a very special place in hell for fraud. Interestingly, Dante often includes Roman mythological creatures, contemporary Italian figures (several of which Dante had met himself), and Biblical figures throughout Hell.

Dante stated Without baptism they lacked the hope for something greater than rational minds can conceive.[9] An odd comment, given that Limbo is home to good reasonable people who couldn't have been baptized and the next circle is the abode of the baptized who let desire overwhelm their reason. 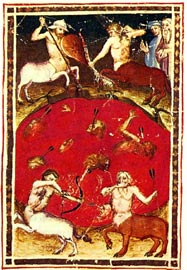 Italian painter Sandro Botticelli illustrated a copy of Inferno as commissioned by a member of the de'Medici family, and one of the paintings he created was a helpful map of Hell, as seen below. 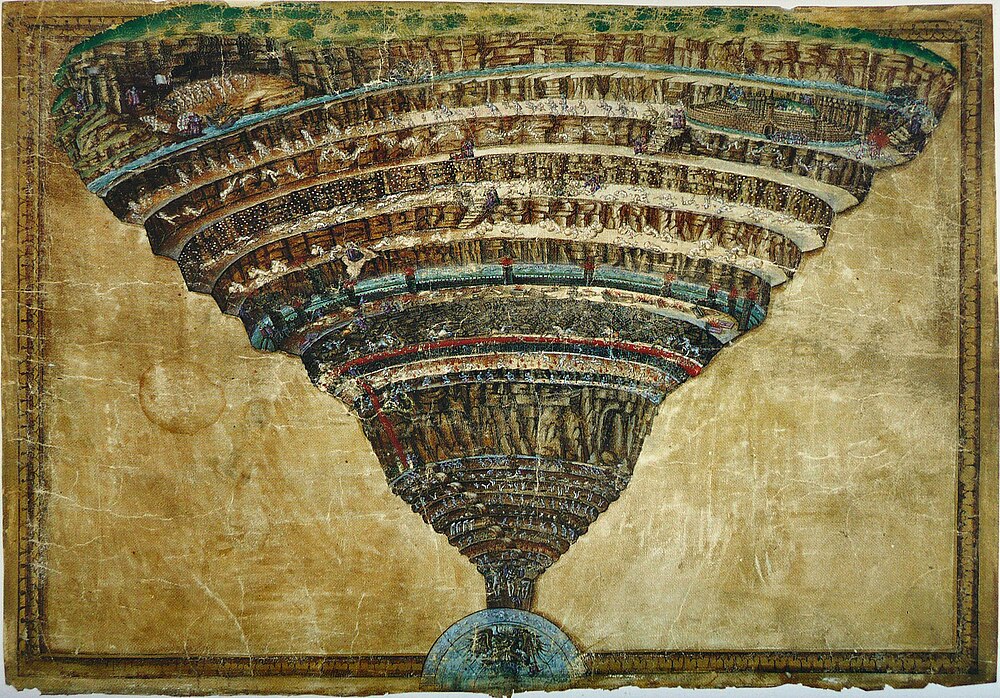 William Blake's illustration of Dante and Virgil before the Angelic Guardian of the Gate of Purgatory.

Virgil then escorts Dante through purgatory, presented vaguely to be a mountain located somewhere in the Southern hemisphere. There he must pass through the 7 terraces of suffering and spiritual growth. There souls cast off their sins terrace by terrace and assume the virtue that is the opposite.

According to one passage, no one can be allowed into heaven without passing through the flames on the 7th terrace. In the narrative, Dante himself has to endure them in order to be shown heaven. He says of the experience that he wished to be dipped in molten glass, because it would be cooler than those flames. It is not explained how Dante, who is still alive and in corporeal form, survives the ordeal.

At the end, Dante floats up off the top of Mount Purgatory toward heaven. This is in keeping with the Aristotelian model of matter, which contests that Earth sinks down to the lowest level, and water above that, and air above that, because it is "in their nature" to sort themselves in this manner. The prevailing view was that it was a human's nature to float above even the air, but the "weight of sin" drags us down to stand on the Earth.

Virgil ends his escort at purgatory, given that he has not earned the right to visit heaven as he was a pagan. There Dante is met by Beatrice Portinari

, a Florentine woman whom Dante is thought to have been in love with but who married another suitor and died 18 years before the start of this poem. Beatrice guides Dante through the spheres of heaven, represented by the "planets" that were known at the time. (The spheres are arranged in the same order as Aristotle's spheres of crystalline aether.)

The importance of the scientific method[edit]

Dante discusses the importance of the scientific method in the Paradiso. Consider the following example in lines 94–105 of Canto II:

The Purgatorio speaks about a spherical Earth and the implications of this, such as the different stars visible in the southern hemisphere, the altered position of the Sun, and the various timezones of the Earth. For example, at sunset in Purgatory it is midnight at the Ebro, dawn in Jerusalem, and noon on the River Ganges. Consider the following example from Canto XXVII of the Purgatorio.

Dante travels through the centre of the Earth in the Inferno, and comments on the resulting change in the direction of gravity in Canto XXXIV (lines 76–120). A little earlier (XXXIII, 102–105), he queries the existence of wind in the frozen inner circle of hell, since it has no temperature differentials.[31]