From RationalWiki
< RationalWiki talk:Mentions
Jump to: navigation, search
This is an archive page, last updated 25 June 2019. Please do not make edits to this page.
Archives for this talk page:   , (new)(back)

Does this page also include links or does the site actually need to be discussed in the article/post/whatever? Nebuchadnezzar (talk) 07:27, 31 December 2011 (UTC)

(EC) I do not think we should link to any Wiki pages at all. We can be less picky than Wikipedia, but we should stick to the more reputable or infamous blogs.

^^There's something oddly sinister about that phrase.

"RationalWiki is maintained by 14 to 24 year old biased hipster atheist. Written in a patronizing and narcissistic tone their menial site gets barely any attention, so they have to seek it by being provocative in the hopes that someone will be offended enough to actually care. This is not an insult, nor am I trying to degrade anyone, it is just a fact.

Whoever gets their facts from a website like that, whether Muslim or not, isn't deserving a morsel of anyones time anyway. Besides, what would you sue them for? These are teenagers whose belongings range from dirty socks to twilight posters. Good luck brother."

Why Are You Atheists So Angry? 99 Things That Piss Off the Godless[edit] 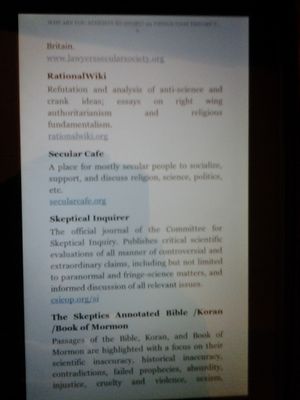 Here is a photo proof, though of my kindle and not a paper book.

Did you know that we are mentioned in the resource back section (there is a lot of 'resources for freethinkers' material) of Greta Christina's book? I bought it a few days ago, but I don't know how to list it. Would it be listed by when the book was published? ±

Yeah, put it under March (according to Amazon), or whenever the paperback was published. Peter Subsisting on honey 03:41, 14 October 2012 (UTC)

Move this to its own page?[edit]

The monthly RW is dead, but this page isn't. Could a move to RationalWiki:Mentions work? ʇυzzγɔɒтqoтɒтo (talk/stalk) 20:08, 2 June 2015 (UTC)

Does this count as scholarly?[edit]

In formatting? Maybe. In content/intent, I don't think so. It reads as an opinion piece by scientist outside his/her field. MarmotHead (talk) 18:33, 24 September 2015 (UTC)

That study by Andrea Ballatore[edit]

Yeah, that's a little odd. It seems like their ratings of conspiratorial vs not conspiratorial are based on the results they got, so maybe they found Cracked's dark underbelly? FᴜᴢᴢʏCᴀᴛPᴏᴛᴀᴛᴏ, Esϙᴜɪʀᴇ (talk/stalk) 13:54, 23 October 2015 (UTC)

Well, our article on Cracked states thusly: "While you're generally safe in relaxing standards of due diligence for this website, it's not as ironclad as, say, Snopes.". Faunas (talk) 14:37, 23 October 2015 (UTC)

AlterNet cites us on Goats[edit]

I suppose it could be worse. Rational Wiki lists 41 types of government; among them is a capracracy, or rule by goats. Goats could be worse. Although considering the slate of folks in line to run our government starting next year, we might all end up wishing they were goats instead.

We're being cited by what is allegedly Taiwan's biggest science/tech blog/community.(see: https://translate.google.se/translate?hl=sv&sl=auto&tl=en&u=http%3A%2F%2Fpansci.asia%2Faboutus )

This rebuttal cites us in a quotemine[edit]