From RationalWiki
(Redirected from Aesthetics)
Jump to: navigation, search

The argument from beauty (or "argumentum ad formam") is a common argument used by theists that appeals to the existence of beauty as a metaphysical property that cannot be explained by materialistic mechanisms. They argue that beauty can only come from some supernatural omnipotent being, specifically such as their God. It is often used in the form where an individual's natural gifts are presented as an example of this supposedly divine beauty. Richard Dawkins gave the following summary of this form of argument in The God Delusion: 'How dare another human being make such beautiful music/poetry/art when I can't? It must be God that did it'.[1] 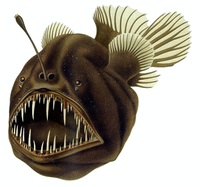 God put humpback anglerfish (Melanocetus johnsonii) in the deep sea so mankind wouldn't have to look at their hideousness.

The biggest problem with the argument from beauty is that it ignores the fact that the perception of beauty is a psychological phenomenon that is easily described in terms of evolutionary principles and neurological models of sensory processing. Also it ignores all the non-beautiful and even downright disgusting things in the Universe which ironically, includes some acts described in the Bible, the so-called word of God, such as the entirety of Ezekiel 23.

The argument also assumes that the perception of beauty is somehow tied to God, which is a shaky connection given endless sorts of hateful and disgusting stuff God knowingly promotes such as the Egyptian plagues and the flood, not to mention using human excrement to bake bread in the aforementioned Ezekiel 4:12. If an all-powerful God has created the world and is responsible for the nice stuff, then naturally, he would be responsible for the horrible stuff as well.

If one tries to argue that the horrible stuff is the result of our corruption, then it brings up the question, why would an all-powerful, all-knowing perfect God create something that will corrupt? This doesn't vindicate God's responsibility. Given the number of atrocities promoted in the Bible compared to those that are more morally palatable, and given that God is ultimately responsible for them, the hypothetical "argument from ugliness" (i.e. if ugliness exists then God exists) would be a slightly better argument and more consistent with God's character.

Furthermore, there is no absolute standard of beauty and the idea of beauty is entirely subjective,[2] although we may have evolved to share many of our ideas of beauty in common. In humans, for example, human beauty often includes symmetry, proportions, ratios, healthy physique, and youthfulness, and this is reflected in artwork throughout history such as Polykleitos's Doryphoros

. In this argument a connection between divine providence and that which is perceived as beautiful, whether it be natural beauty or a work of art, is simply assumed to be self-evident. No one ever attempts to present the logic behind this argument, and if they did, they would more than likely be laughed out of the room.

But beauty is in the eye of the beholder.

One example of the argument from beauty is to say that the autumn leaves are very beautiful, meaning that the trees on which they rest could not have been the product of "ugly" random chance. However, from an objective standpoint, the leaves' colors are simply variations in the wavelengths of light they reflect, and this does not imply a leaf designer any more than it implies the existence of Jack Frost. As evidence of this, a color-blind person would not be likely to infer the existence of God from the autumn leaves, since his (by ID's reasoning) God-designed eyes wouldn't see the colors we do.

Another example of this argument is discussed in the first chapter of God is Not Great where a schoolteacher named Ms. Watts says 'So, you see children, how powerful and generous God is. He has made all the trees and grass to be green, which is exactly the color that is most restful to our eyes. Imagine instead if the vegetation was all purple or orange. How awful that would be'.[3] Hitchens realises, as should anyone with a basic knowledge of natural selection, that it is our eyes that are adapted to nature and not the other way around. We have simply evolved to perceive these common sights as something beautiful so we wouldn't consume energy trying to avoid nature. Additionally, our eyes are most sensitive to the yellow-green part of the color spectrum, so green tends to be one of the least "interesting" colors, to the point that dominantly green paintings aren't visually interesting to the viewer. In the art world, green paintings usually have to be balanced with reds in order to keep the piece visually interesting.

Also, the assumption that green is the color that is most restful to our eyes is not exactly correct. Green ink, anyone? What matters more is the muteness of the color. A grass field that is pastel and otherwise muted shade such as lavender would be much easier on the eyes than ectoplasm lime green.

God has reason, apparently overriding reason, for making, not merely any orderly world (which we have been considering so far) but a beautiful world—at any rate to the extent to which it lies outside the control of creatures. (And he has reason too, I would suggest, even in whatever respects the world does lie within the control of creatures, to give them experience of beauty to develop, and perhaps also some ugliness to annihilate.) So God has reason to make a basically beautiful world, although also reason to leave some of the beauty or ugliness of the world within the power of creatures to determine; but he would seem to have overriding reason not to make a basically ugly world beyond the powers of creatures to improve. Hence, if there is a God there is more reason to expect a basically beautiful world than a basically ugly one. A priori, however, there is no particular reason for expecting a basically beautiful rather than a basically ugly world. In consequence, if the world is beautiful, that fact would be evidence for God's existence. For, in this case, if we let k be 'there is an orderly physical universe', e be 'there is a beautiful universe', and h be 'there is a God', P(e/h.k) will be greater than P(e/k). … Few, however, would deny that our universe (apart from its animal and human inhabitants, and aspects subject to their immediate control) has that beauty. Poets and painters and ordinary men down the centuries have long admired the beauty of the orderly procession of the heavenly bodies, the scattering of the galaxies through the heavens (in some ways random, in some ways orderly), and the rocks, sea, and wind interacting on earth, 'The spacious firmament on high, and all the blue ethereal sky', the water lapping against 'the old eternal rocks', and the plants of the jungle and of temperate climates, contrasting with the desert and the Arctic wastes. Who in his senses would deny that here is beauty in abundance? If we confine ourselves to the argument from the beauty of the inanimate and plant worlds, the argument surely works.

A related argument is the argument from female orgasm which contends that since a lack of sexual climax in (some unfortunate) women is not a hindrance to reproduction, the existence of the female orgasm in general can only be explained as the superabundant gift of a generous Creatrix (though not so superabundant, it seems, since some women don't get them). A similar but little-used argument notes that certain animals, such as foxes and pigs, have even longer orgasms than humans. The conclusion to this argument raises intriguing philosophical questions as to the beneficence, and number of legs, of the divine creator, especially given biblical references to the "lamb of God".