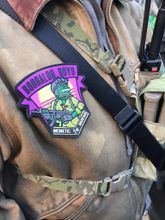 The so-called Boogaloo boys (also Boogaloo bois) are a militia movement of far-right gun nuts formed in 2019 that are trying to overthrow the government[2] to then spark a second American Civil War. They can be best described as a bizarre combination of White Supremacists and Yippies/Hipsters, in that they revel in their own absurdities. The name is a reference to the racist dogwhistle "boogaloo," and they've become infamous for their involvement in the George Floyd protests,

In Internet lore, the term "boogaloo" has had a long history of being appended to sequels, usually to mock its poor quality. The term derives from the film Breakin' 2: Electric Boogaloo,

the second film in a series made to capitalize on the popularity of the street dance form known as "breakdancing" in the 1980s.[4] (Ironically for those invoking the term to reference a potential race war, the two films in the Breakin series actually strongly celebrate multiculturalism and depict an environment where everyone is accepted.)[5]

itself refers to a genre of Latin music and dance, popular in the 1960s, which fused African American rhythm and blues with Latin music forms.[6][7] This melting pot of influences resulted in songs like the hit song from Pete Rodriguez, "I Like It Like That"[8] (a song which references the term "boogaloo" in the lyrics,[9] and which younger audiences might know because Cardi B

The term "boogaloo" also refers to a form of street dance that fused various dances within African American communities in the 1950s, and was then picked up by many soul music musicians and listeners in the 1960s. The Godfather of Soul himself, James Brown, can be seen doing the "James Brown boogaloo" dance in a clip from 1966.[10] The term "electric boogaloo" (as used in Breakin' 2) actually refers to a dance derived from this in the 1970s, that added a street dance technique called "popping" to the boogaloo dance technique.[11]

All of this multicultural history is lost in the Internet chat rooms of the far right, where the simple meme of an "electric boogaloo" being a poor sequel was utilized to imply that an upcoming poor sequel to the American Civil War, Civil War 2: Electric Boogaloo, was on its way. Hence the name of the movement: "boogaloo".[12]

Like many other noxious concepts on the web, the "boogaloo" movement can trace its origins to 4chan, going back at least as far as 2012.[13] However, instead of originating with /b/ or /pol/, it is claimed that much of the boogaloo movement has its origins in the /k/ group, the 4chan area devoted to weapons.[13]

Compared to /pol/ on 4chan, the politics are much more varied in nature (ranging from posters who are outright white supremacist to posters who strongly support Black Lives Matter[14]). But the talk on civil war, social collapse, and violent conflict with law enforcement officers is much, much heavier.[13] Unsurprisingly, the boogaloo movement is either an outgrowth of or allied with the militia movement.[13] Ironically for an anti-government movement, the movement generally appeals to (and is marketed towards) former members of the military.[15][16][note 1]

Later, the movement migrated to Facebook. A report published in April 2020 identified 125 Facebook groups devoted to the idea of the "boogaloo".[17]

The group takes some of its inspiration from Marvin Heemeyer

(1951–2004), who killed himself after going on a rampage in Granby, Colorado with a bulldozer that he had modified into an armored vehicle (known as 'killdozer').[13] Heemeyer had written "Sometimes reasonable men must do unreasonable things." and "I became unreasonable."[13] The latter quote was adopted by the Boogaloos, and was written in blood along with the word 'boog' by Steven Carrillo before his arrest.[19]

A Boogaloo flag, with igloo and Hawaiian motif stripe

Like anything 4chan related, the "boogaloo" meme devolved to satisfy the need to shitpost

and also to disguise their intention. Soundalike terms like "big luau" and "big igloo" were used online in place of the term "boogaloo".[13] As a result (bizarrely, again, for a group concerned (to some degree) about a race war and white supremacy), the group loosely embraced the Hawaiian shirt

and started wearing this at protests, along with the usual military fatigues and weapons typical of the militia movement.[3][20]

Another term used by those in the boogaloo movement is "boojahideen", a slang reference to people in the movement.[21] This term is a play on the term "mujahideen

" that is widely used in the English world to describe Islamic guerilla-type militant groups.[22]

Awareness of the group increased in 2020, when many devotees of "the boogaloo" started appearing both at the relatively small protests in April 2020 protesting lockdowns due to the 2019-20 COVID-19 outbreak, and especially at the June 2020 protests against police brutality due to the killing of George Floyd.

While some "boogaloo boys" actually strongly supported the protests against police brutality,[14] some of them went the opposite direction and actively embraced a violent form of accelerationism

, encouraging and promoting violence in order to speed up the collapse of society.[3] As a result, the boogaloo movement has been linked to some of the relatively few violent incidents that have occurred at these protests.

The boogaloo movement's role in the protest violence, of course, is conveniently being ignored by populist right wing outlets like Fox News and populist crime against humanity Donald Trump.[24] (These folks prefer to blame Antifa, despite scant evidence that "antifa" has been a significant player in the protests as of June 12, 2020.)[25]

Facebook's role in the spread[edit]

Facebook has been strongly criticized for allowing these groups to proliferate, despite many posts in these groups "directly advocating for violent action and tactically planning how to defeat government entities", according to the watchdog group Tech Transparency Project.[17][26] The Southern Poverty Law Center examined these groups and found that most of them were replete with memes fantasizing about or encouraging violence against the police. Other posts contained threats aimed at politicians, especially those who have passed gun law reform measures.[27] Many of the individuals listed in the "arrestees" section below were active in Facebook boogaloo groups — or in one case, was actually a group moderator.[28]

Despite the clear terms of service violations, it took severe civil unrest for Facebook to finally take measures to limit the spread of "boogaloo" groups, but these measures are widely regarded to be too little, too late.[29] Finally, on June 30, 2020, Facebook, facing increasing pressure for its lackluster handling of hate speech and other harmful content, banned a large amount of "boogaloo" groups and designated the boogaloo movement as a "dangerous organization", giving it the same classification as terrorist and hate groups.[30] Of course, prior to (and even after) this point, Facebook was making quite the profit from pro-boogaloo advertisements calling for violence against police and state officials.[31] 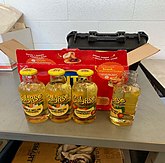 Molotov cocktails allegedly carried by Parshall, Lynman, and Loomis in 2020