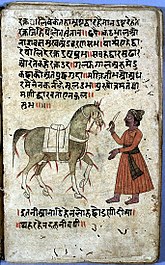 If you could read Sanskrit, you might be able to make some sense out of this scene.

Sanskrit (in Devanagari: संस्कृतम्) is the classical language of India, and one of the liturgical languages of Hinduism, the language of the Vedas and Upanishads. It is also used in Jainism, and to a much smaller extent in some forms of Buddhism It is also the language of the Indian epic poems, the Ramayana and Mahabharata. It is one of the oldest and earliest attested of the Indo-European languages; parts of the Rig Veda are believed to date back to around 1500 BCE. Its current position in Indian society is somewhat analogous to Latin in early modern Europe or Classical Chinese in north east. When Sanskrit was encountered by British colonialists in India, it became clear to them that the language was related to Classical Greek (a language that all Brits of above average schooling had a knowledge of at the time) and other Indo-European languages. This led to the then-startling discovery that the languages of at least some people in India shared a common ancestor with the languages spoken by most Europeans (hence the terms "Indo-European" and "Indo-Germanic). However, the common belief at the time that all Indian languages are related to Sanskrit is demonstrably wrong.

Ancient Sanskrit on Hemp based Paper. Hemp Fiber was commonly used in the production of paper from 200 BCE to the Late 1800's.

Various Hindu nationalists, and Hare Krishna devotees such as Stephen Knapp, have asserted that Sanskrit is the original language of all Indo-European languages. One motivation behind these claims appears to be a wish to assert that the Sanskrit language, and the Aryan people who spoke it, did not arise elsewhere, but rather are indigenous to India and arose locally. Even if their ancestors had moved into the area before 1500 BCE, that still makes them outsiders, apparently; they do not want this.[1] These writers will take exception to the usual claims of historical linguistics, that:

A related claim is that the Brahmi alphabet, which is the ultimate source of all the wide variety of native alphabets in India, South Asia, and parts beyond,[2] was not derived from existing alphabets. Instead, the Brahmi scripts have been claimed by some to descend from the undeciphered writing system of the Indus Valley civilization, despite the intervention of a millennium and a half of illiteracy between the disappearance of the Indus Valley civilization and the first Brahmi inscriptions.[3] Also the fact that Sanskrit has thus far not been useful in the deciphering of the Indus valley script might indicate the two are unrelated.

"Since the start of human civilization on the earth, people and the Sages both spoke pure Sanskrit language.... Sanskrit is the source of all the languages of the world and not a derivation of any language. As such, Sanskrit is the Divine mother language of the world."[4] This tripe literature resorts to many of the standard tropes of denialism. For instance, because there is disagreement among linguists about the Indo-European homeland, claiming that it is native to India is as likely as any other explanation:[5]

All of the rest of the world's languages are claimed to be derived from Sanskrit, which would make all languages later Indic languages or apabhraṃśa[6][4]

Others have made weaker claims of the primacy of Sanskrit. David Frawley, an astrologer in the Hindu tradition, argues that Sanskrit must be indigenous to the Indian subcontinent because the language itself is too sophisticated to have been spoken by "barbarian hordes".[7] Never mind that cultures considered "primitive" by technological societies tend to have more complex languages.

Other, even more curious claims have been made for Sanskrit literature; it has been claimed that the Ramayana is two million years old, and includes gomphotheres

.[8] Under accepted chronologies, this would mean that the poem was written by Homo habilis, who apparently spoke Sanskrit. This seems, shall we say, unlikely.

Sanskrit is not the first language[edit]

Sanskrit is descended from Proto-Indo-European. But many features shared among other Indo-European languages, and which can be shown to be the result of inheritance from the original protolanguage, cannot be derived from Sanskrit alone.

There are many features of the Proto-Indo-European language whose existence is attested by the comparative evidence, which are not found in Sanskrit:

In short, we can be certain that Sanskrit has changed several of its sounds from the ancestral form, and merged them with sounds it already had. The entire sound inventory of Proto-Indo-European cannot therefore be recovered from the evidence of Sanskrit alone, and the method of comparative reconstruction requires inputs from other Indo-European languages. Sanskrit cannot be the sole ancestor of the Indo-European languages, much less all the world's languages. 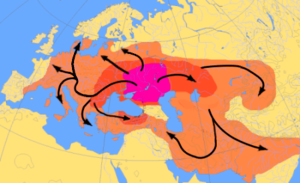 The most widely accepted model of the origins of the Indo-European languages has them radiating out of an area in contemporary Ukraine, Russia, and Kazakhstan.

The lexicon of the Indo-European languages quite simply suggests that the people who spoke the language ancestral to Sanskrit were not all that familiar with the features of the Indian subcontinent. The words they had suggest that they lived elsewhere.

They had words for trees like ash, apple, oak, linden, aspen, pine, but nothing for palm tree or sandalwood, for example. They knew animals: bear, wolf, hound, turtle, elk, deer, trout/salmon[16], rabbit, horse, cow, but no words can be reconstructed for tiger or elephant. They had words for snow but none for typhoon or monsoon.[17] While there are a number of competing proposals for locating the Indo-European homelands, these focus on steppe or woodland territories from Northern Europe, the Ukraine, and Anatolia. The reconstructed lexicon of Indo-European does not suggest that they came from a tropical or subtropical area.[18]

And, by contrast, in the Dravidian languages

, most of which are spoken in southern India, words can be reconstructed for trees like banyan, neem, coconut, mango, palmyra and tamarind; crops like rice paddy, yam, banana, sugarcane, and ginger, and animals like tiger, elephant, mongoose, cobra and monkey.[19] The people who originally spoke Sanskrit had no names for any of those tropical animals or plants. This suggests that the Dravidian languages were first spoken in a place where rice paddies, cobras, and ginger could be found. Unlike the Sanskrit homeland, the homeland of the Dravidian languages seems tropical or subtropical, and looks a lot like India.

Sanskrit, in turn, borrowed many of these words, even borrowing certain Munda and Dravidian sounds.[20] Sanskrit words for which Dravidian etymologies are certain include kulāya, "nest", kulpha, "ankle", daṇḍa, "stick", kūla, "slope", bila, "hollow", and khala, "threshing floor".[21] According to F. B. J. Kuiper, approximately 4% of the lexicon of the Rig Veda is not Indo-European, but was borrowed from Dravidian or Munda languages

There were bears and wolves, but no cobras or tigers, where the language ancestral to Sanskrit was spoken. While Sanskrit is foundational to the languages and culture of northern India, its own ancestors came from outside the region.[23]

A widely repeated claim portrays Sanskrit as somehow an ideal language for computing, artificial intelligence, or science generally. Some people also believe that Sanskrit is widely used at NASA in computing.[24]

These claims go back to a single 1985 paper by Rick Briggs[25] in which Briggs claimed that, while most natural languages are "cumbersome and ambiguous in their function as vehicles for the transmission of logical data", Sanskrit's grammatical tradition rendered the language so transparent that he believed that it was uniquely suited for computing. "Among the accomplishments of the grammarians can be reckoned a method for paraphrasing Sanskrit in a manner that is identical not only in essence but in form with current work in Artificial Intelligence. This article demonstrates that a natural language can serve as an artificial language also, and that much work in AI has been reinventing a wheel millennia old."

Briggs is right about this much. The grammatical tradition and analysis of Sanskrit, culminating in the Astyadhyayi (अष्टाध्यायी, "Eight Chapters") of Pāṇini

(पाणिनि) was remarkably sophisticated. It included a complex, abstract notation for both phonological and combinatory features of the language. It was a more sophisticated analysis of language than anything that appeared in the Western world before the mid-20th century with the analyses of Ferdinand de Saussure (1857-1913) and of Noam Chomsky.[26] It also seems obvious that Pāṇini's grammar represents the culmination of a long preceding tradition of analysis, now lost or subsumed in his work.

This sophistication, however, reflects the religious imperative of carefully preserving the methods for correct recitation of the Vedas. Hinduism held that their correct pronunciation was vital for their effectiveness in worship. The texts were preserved by oral recitation and memorization. For much of the history of India, it was held to be a sin to write down the Vedas. This required attention to detail, to prevent the oral Vedic texts from becoming subjected to the predictable processes of linguistic drift and change.[27]

This attention to detail was also important because Sanskrit is in fact an ordinary natural language. And a fairly hairy one at that: it is a typical older Indo-European language of the highly inflected kind that gives computers fits. It has ten separate classes of verbs

with complicated inflections that change the "grade" of the stem and lengthen or omit vowels. Pāṇini's grammar is terse and complex because it had to be. In short, anyone who has learned Latin (or Ancient Greek for that matter) at some point can imagine the level of complexity Sanskrit grammar must have had. Almost all major Indo-European languages have lost a lot of their inflection and other complicated grammatical features over time (with English being something of an extreme example, as it is now a predominantly analytic language). Sanskrit, being three and a half millennia old in its oldest preserved texts, of course retains a lot of them. In short: Latin ain't got shit on Sanskrit. The language retained primitive features because it was deliberately kept from changing by people who thought its words were magic.

Modern Hindu nationalism arose partly as a reaction to the British occupation of India, and wide-ranging Christian missionary efforts. The partition of British India into India and Muslim majority Pakistan (which then included Bangladesh aka East Bengal) also accelerated its growth.

Many Hindu nationalists wanted English expunged from Indian society, a campaign which has largely failed. They wished to replace it with Hindi, but since Hindi is mainly a language of northern India, this was unpopular in the south. (English, though controversial remained India's main lingua franca and language of international trade.) After Partition, Hindu nationalist academics attempted to purge Hindi of many foreign words especially Persian and English, while in Pakistan Urdu was similarly purged of much of its Sanskrit content. New words were often coined in Hindi either by borrowing directly from Sanskrit or remoulding Sanskrit roots.

A handful of Hindu nationalists wished to go even further and replace Hindi and other Indian languages with Sanskrit, because they saw it as the pure, original language and as of divine origin. There was one small problem - Sanskrit was mainly a scholarly language and died out as a community tongue long ago. Over the course of the past century, there have been various revival attempts, and censuses claim several thousand people speak it as a mother tongue (although how true this is, is contestable.)

Thousands of books have been published in Sanskrit since Indian independence, and the language can be heard in secular use in some radio broadcasts. The language is even used for naming Indian missiles and space probes. As language revival attempts go, it is probably far behind Hebrew, but more successful than Cornish or Hawaiian. In terms of prestige, it is perhaps similar to Irish.