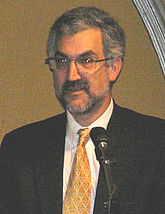 Pipes in 2007. Another high-quality photo from Wikipedia. Note Satanic glow in eyes.

Daniel Pipes is a right-wing academic/crank — and, amazingly, a member of the Council on Foreign Relations[1] — who is popular among conservatives for his virulently anti-Islamic views. Basically, if it involves Muslims, you can be sure that Pipes has written a column claiming that it indicates that Muslims are evil.

Pipes is the son of the historian and wingnut Richard Pipes

and opted to follow in his father's footsteps,[2] with questionable results. He holds a Ph.D. in medieval Islamic history; however, his current obsession "specialty" is Islam in modern society. He was a professor for about eight years, but he has not been involved in academia in any significant way since 1986.

In 2003, George W. Bush nominated Pipes to a position in the United States Institute for Peace, an action which proved slightly controversial.[3] The Institute's stated goals are as follows:[4]

Presumably the nomination was made on Backwards Day.

So what does Pipes think of Muslims?[edit]

Saying that Pipes thinks Muslims are bad is putting it mildly. He's built his career on demonstrating that everything ever done by Muslims (as individuals or as a group) is proof that they are not to be trusted. In the process, he has argued for some interesting political notions. To wit:

Anti-Semitism, historically a Christian phenomenon, is now primarily a Muslim phenomenon -- and not just in the Middle East, but right here in the United States...This has several implications for Jews. First, as the population of Muslims in the United States grows, so does antisemitism[5]

West European societies are unprepared for the massive immigration of brown-skinned peoples cooking strange foods and not exactly maintaining Germanic standards of hygiene.[6]

In retrospect, I should either have put the words "brown-skinned peoples" and "strange foods" in quotation marks or made it clearer that I was explaining European attitudes rather than my own.

Smith's simple and near-universal principle provides a tool to comprehend the Arabs' cult of death, honor killings, terrorist attacks, despotism, warfare, and much else. He acknowledges that the strong-horse principle

may strike Westerners as ineffably crude, but he correctly insists on its being a cold reality that outsiders must recognize, take into account, and respond to.[7]

They are all attractive, but this surprising frequency of Muslims winning beauty pageants makes me suspect an odd form of affirmative action.[8]

Muslims appear growingly aware that the terroristic ways of Osama bin Laden offer a less successful path to realizing the Islamist goals of imposing the Shari’a and creating a caliphate do than the political, lawful ways of Recep Tayyip Erdogan, Turkey’s newly-triumphantly reelected prime minister. Whereas terrorism stimulates its own antibodies and offers no plausible path to power, working through the system is proving successful in such diverse places as Egypt, the Palestinian Authority, Lebanon, Iraq, and Bangladesh, as well as in the West. Therefore, this survey has more subtle and ambiguous implications than first appear.[9]

It is hard to see how violence, how terrorism will lead to the implementation of sharia...It is much easier to see how, working through the system — the school system, the media, the religious organizations, the government, businesses and the like — you can promote radical Islam.[10]

The recent distribution of some 28 million copies in the United States of the 2005 documentary Obsession has stirred heated debate about its contents. One lightning rod for criticism concerns my on-screen statement that "10 to 15 percent of Muslims worldwide support militant Islam."[11]

In a declassified National Intelligence Estimate, Iran: Nuclear Intentions and Capabilities, the U.S. intelligence agencies announced last December, "We judge with high confidence that in fall 2003, Tehran halted its nuclear weapons program." This highly controversial conclusion encouraged the Iranian leadership to dismiss the possibility of an American attack, permitting Tehran to stake out an increasingly bellicose position and rendering further negotiations predictably futile. Ideally, the Iranians themselves can still be induced to close down their nuclear program, for the alternatives – either a U.S. or Israeli attack, or allowing the apocalyptically-minded leadership in Tehran to get the Bomb – are far worse.[13]

Therefore, while my heart goes out to the many Iranians who desperately want the vile Ahmadinejad out of power, my head tells me it's best that he remain in office. When Mohammed Khatami was president, his sweet words lulled many people into complacency, even as the nuclear weapons program developed on his watch. If the patterns remain unchanged, better to have a bellicose, apocalyptic, in-your-face Ahmadinejad who scares the world than a sweet-talking Mousavi who again lulls it to sleep, even as thousands of centrifuges whir away.[14]

He needs a dramatic gesture to change the public perception of him as a lightweight, bumbling ideologue, preferably in an arena where the stakes are high, where he can take charge, and where he can trump expectations. Such an opportunity does exist: Obama can give orders for the U.S. military to destroy the Iranian nuclear weapon capacity.[15]

Pipes is disturbed in general[edit]

In sum: Obama was an irregularly practicing Muslim who rarely or occasionally prayed with his step-father in a mosque. This precisely substantiates my statement that he “for some years had a reasonably Muslim upbringing under the auspices of his Indonesian step-father."[17]

In 2006, Pipes injected an extra strength dose of poison into the body politic when he coined the phrase "Sudden Jihad Syndrome". In his quest to identify all Muslims as evil, he decided that various acts of violence by American Muslims with no history of radicalism were actually caused by those individuals spontaneously becoming radical. In his words:

It has the awful but legitimate consequence of casting suspicion on all Muslims. Who knows whence the next jihadi? How can one be confident a law-abiding Muslim will not suddenly erupt in a homicidal rage? Yes, of course, their numbers are very small, but they are disproportionately much higher than among non-Muslims.[18]

Some may say that this bit of bigoted pop psychology is unbecoming an academic, even a former one. This should be mitigated by the fact that Pipes was likely suffering from Sudden Moron Syndrome at the time.

Pipes has his own think tank, the Middle East Forum. Not mere thinkers they, starting from 2002, began investigating colleges via their Campus Watch program. Per the website, the goals are as follows:

The project mainly addresses five problems: analytical failures, the mixing of politics with scholarship, intolerance of alternative views, apologetics, and the abuse of power over students. Campus Watch fully respects the freedom of speech of those it debates while insisting on its own freedom to comment on their words and deeds.[19]

Clearly, Daniel Pipes is just the person to accomplish these goals.

Before he became a peddler of conspiracy theories about the coming global caliphate, Pipes was actually most known for his 1997 book Conspiracy: How the Paranoid Style Flourishes and Where It Comes From,[20] a book which sought to debunk conspiracy myths surrounding world organizations and, most specifically, those involving the Bilderberg Group and Council on Foreign Relations. He now uses his book as a how-to manual.

In 2006, he helped spread the rumors of no-go zones in Europe.[21] To his credit, after actually visiting many of those areas he recanted his arguments saying that the areas were a little run down but ultimately fairly peaceful.[22]

Taking his wingnuttery to its logical conclusion, the Middle East Forum took up the cause of the racist hooligan Tommy Robinson (real name: Stephen Yaxley-Lennon) with vigour, going to far as to put out a press release touting its supposed role in his release and seeking to help him gain asylum (!) in the United States—amusing for an institution which normally mocks and derides 'asylum seekers' from other parts of the world. When pressed on Tommy Robinson, Pipes later admitted regret at having supported him and disclaimed all support.[23]