Book of the Bible, see Books of Chronicles 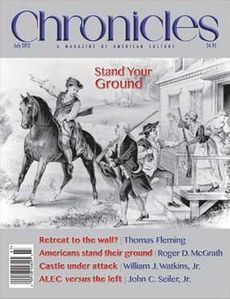 Chronicles: A Magazine of American Culture is a monthly magazine published by the Rockford Institute, a paleoconservative think tank.[1] Established in 1976, it stands as the premier periodical for erudite, highly-educated racists.

If the American far right is defined by how white, male, affluent, and out-of-touch it is, then contributors to Chronicles are the whitest, most affluent, and most out-of-touch men there are. To their credit, they do part ways from movement conservatism by opposing big business and interventionist foreign policies. Unfortunately, even opposing big business and interventionism leaves plenty of inhumane ideas for the magazine to support; Chronicles deals in the worst of the right: racism, sexism, and Christianism.

Chronicles peaked in the 1990s,[2] helping shape the paleoconservative revival that accompanied Patrick Buchanan's 1992 and 1996 Presidential campaigns. However, the magazine's intellectual ambitions damaged it in the growing anti-intellectual climate that currently defines the modern conservative movement, an effect made worse by editor Thomas Fleming[3] and his rigid adherence to and reverence for Catholic orthodoxy, which alienated the Evangelical segment of the readership.[2] Its subscriber base has since dropped from 15,000 at the magazine's apex[2] down to about 5,000 as of 2006.[3]

Unlike other far-right publications, such as WorldNetDaily or American Thinker, Chronicles possesses a definite air of erudition. Their contributors are all highly educated, well-read, and thoughtful — they're the most eloquent and philosophical racists you will ever read. Among their contributors, Clyde Wilson is highly respected by historians for his work on slavery-defender John C. Calhoun's diaries,[4] Thomas Fleming has a doctorate in classic literature,[5] and Srdja Trifkovic may hate Muslims but he has actually read the Qu'ran.[6]

But, ultimately, what makes a person a hack is their eagerness to propound on the importance of principles, while waffling and obfuscating when it comes to actual facts and reality. And make no mistake: almost every Chronicles writer is a hack.

A key giveaway of Chronicles' hackery is that, despite considering mainstream conservatism to be craven and corrupt, and disdainfully holding themselves as apart from it, its editors uncritically accept many of the talking points pushed by the most craven and corrupt of conservatives. Thus, Representative Joe Wilson was a hero for yelling "You lie!" at President Obama during a speech[10] (ignoring the fact that Wilson was himself lying). Barack Obama is in the very least a "quasi-Muslim,"[11] and he is definitely a Marxist.[12][13][14][15] Also, the construction of an Islamic community center in Manhattan is an act of aggression by Muslims,[16][17] although New York City isn't a part of "real America."[18]

Chronicles traffics heavily in pseudohistory. Because its mostly Catholic editor base eschews Biblical literalism and remains suspicious of any morality that postdates the Enlightenment, they turn to "traditionalism" for their morals, which is derived from a culture's history.[19] The problem is, real history is so messy that you can't derive any morality from it at all, so Chronicles writers are forced to assert their own version.

Contributors consequently treat history as a series of distinct moral fables — lessons for the common man to learn from. Spartans were proper manly men who didn't cry, and if you do cry it's because you've been Americanized.[20] Republics fail like Rome when they "have no champion" (presumably for conservatism), and that's why Obama's reelection in 2012 will doom America.[21] America's moral fiber was stronger during the Great Depression, but is now too weak to withstand the Great Recession of the 2000s.[22] Jews corrupted Wall Street, therefore it can be made less corrupt if we get rid of them.[23] Feminism was bad because it only helped lesbians.[24] Roman slaves led pretty good lives, therefore poverty today is worse than actual slavery.[25] Anglo-Saxons make good laws, then Chinese people corrupt them.[26] (Their pseudohistory heavily reinforces their racism.)

While rarely the focus of an article, moralizing assertions like this about history are littered throughout Chronicles, presented as just-so kernels of wisdom that refute more liberal, modern morals.

Any historical fact that is dissonant with their ideology is quietly swept under the rug. For example, as traditionalists, Chronicles contributors have a great appreciation for the Greek classics, but the Greeks' icky homosexual practices are either strategically left unmentioned or declared to be "misinterpreted" by foul pro-gay "historical revisionists".[27]

Also, undocumented immigrants. By which they mean Hispanics. According to Chronicles, Hispanics are dangerous criminals[36][37] who destroy family values,[38] and are plotting to take over the southwestern United States.[39] Hispanic population growth is more tragic than World War I[40] and Hispanic immigration is a gang-ridden invasion.[41] (They love describing immigration as an "invasion".[42][43][44]) Chronicles has abiding terror of the fact that future America may not be white.[45]

None of Chronicles' contributors are under 44 years of age. All of them are white, male, and Christian. Given that these demographics also describe the magazine's readership, it's unlikely to change anytime soon. As the modern conservative-industrial complex funnels young intellectuals into more useful roles than writing for obscure racist magazines, Chronicles is effectively doomed to a slow death from starvation.[note 2]

The magazine's current line-up of contributors include:

See the main article on this topic: Meme

Like all political publications, Chronicles has its own narrative, echoed amongst its columnists and in the comments section.

In general, Chronicles is the intellectual backbone (if one could say that) for the entire Lost Cause of the South.

The editors of Chronicles often delete an article or even whole sets of articles from their website. They also disallow Internet Archive from archiving many of their pages, any article so deleted is effectively gone for good. Fortunately, archive.today

is able to bypass this problem on an on-demand, page-by-page basis.

In one particularly notable (but long-removed) article the author made it clear they believed Richard Nixon's personal conduct to be more important than his actions as President of the United States. When Nixon treated a recipient of the Medal of Honor with great respect, that meant Nixon was in fact a true and moral gentleman, regardless of his actions as a politician.