From RationalWiki
Jump to navigation Jump to search
Delaware 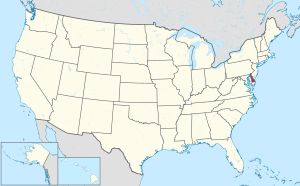 The home of one Joseph R. Biden

Some kind of coin.

Delaware is one of the thirteen British colonies that rebelled and formed the United States. They were the first to ratify the new constitution several years later. The state was named after Earl De La Warr.[note 1]

President Joe Biden hails from Delaware, and apparently used to ride Amtrak home every night.[note 2] Christine O'Donnell ran for senator here too, but they'd probably rather you didn't bring that up.

Delaware's income tax rate is below the national average in the US,[1] along with tax incentives for businesses, making it something of an inland tax haven. Because DuPont had the gold and thus made the rules, Delaware is the incorporation capital of the US, with 50% of US corporations being registered there, since they managed to make their rules the laxest (second)-fastest. (New Jersey actually beat Delaware to the bottom, but then Woodrow Wilson, while Governor of New Jersey, had his reformism manhood questioned by then-President Theodore Roosevelt; Wilson opted to reform New Jersey's incorporation statute to hold New Jersey corporations to a higher standard, but then all of the New Jersey corporations that didn't do most of their business in-state just hopped over Delaware Bay and reincorporated in Delaware. New Jersey corporate lawyers have been pissed ever since.) Delaware is basically the Luxembourg of America.

Delaware's consumer financial services regulation is extremely favorable to banks. In 1979, the United States Supreme Court's issue its decision in Marquette National Bank of Minneapolis v. First Omaha Service Corp., 439 U.S. 299, 99 S.Ct. 540, 58 L.Ed.2d 534 (1978),[2] finding that the National Banking Act permits a national bank to charge interest at the rate permitted by the state in which the bank "resides" (defined by federal law) rather than the interest rate of the state in which the consumer resides. The case started a rapid "race to the bottom," with national banks choosing to "reside" in those states with the most favorable (e.g. least regulated and lowest) interest rates[3]. Delaware and South Dakota quickly capitalized on the natural consequences of the decision. Delaware repealed its own interest rate cap altogether in 1981[4], leaving its resident national banks free to charge rates on consumer loans that would have been capped at significantly lower rates.[note 3] "Most leading banking states had relaxed or repealed their interest rate ceiling by 1982."[5] The Court's 1996 decision in Smiley v. Citibank South Dakota, NA, 116 S.Ct. 1730, 135 L.Ed.2d 25 (1996)<ref>The decision</ref>, held that banks were also free to charge whatever late fees they wished as "interest" under Marquette.