West Virginia is the world's largest abandoned coal mine a United States state that was formed during the Civil War, and consists of the part of Virginia that did not support secession, even though it also had slaves. No one really knows why they chose to leave the commonwealth, but lord, Virginia is glad they did.

West Virginia owned the rocks that fueled America's industrialization, but here they are with nothing left to show for it. Left behind, after the mining boom is over, with a crumbling infrastructure and unfulfilled pensions/health plans. Once the Dems were forced to admit that coal isn't coming back, it was obvious that they were headed down Trump's golden toilet (which Joe Manchin polished, as we recall).[1] 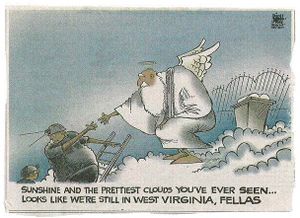 West Virginia is full of beautiful mountains, choo choo trains, coal mines, moonshine stills, rock climbing, BASE jumping, and awesome white-water rafting. The best thing to have ever come from West Virginia was Senator Robert Byrd, who despite once being in the Ku Klux Klan, had gone on to be a force for civil rights and liberties. Also, he was apparently the only Senator who still believed that nothing should be voted on until it's been read. The other best thing was Congressman Ken Hechler (9 terms, 1959-1977), who was about where Bernie Sanders is politically and yet kept getting re-elected by wide margins in a southern state.

The state slogan is "Country Roooooooads, Take Me Hoooooooome, To the Plaaaaaaace, I beloooooooong…" "Wild and Wonderful". Governor Joe Manchin (a sensible person who can otherwise do no wrong) did a major faux pas changing the slogan to "Open for Business". This was so unpopular it was changed back after about two weeks at the cost of twice replacing all the highway signs at the state line.

In southern West Virginia folks talk like they're from Tennessee, and in northern West Virginia folks talk like they're from Pittsburgh. Nobody knows how folks in the middle of the state talk, because nobody has dared venture very far into this uncivilized wasteland. Rumor has it that those few who do venture into the interior of the state are kidnapped by tommyknockers and put to work in the mines, where they load sixteen tons a day and go deeper in debt to the company store.

West Virginia had a Democratic legislature for over 80 years. Democrats had strong ties to unions, and in a coal-dominated state, this gave them a lot of power. Coal decline combined with Republican rhetoric has flipped the state's party affiliation.

The flip began with the Bush Jr. campaign. Al Gore's crew mistakenly believed WV would vote for him, since they had overwhelmingly voted for Clinton in both of the previous elections. They were inactive while the Bush campaign came in and made promises. Final electoral college tally was 271 for Bush, with 266 for Gore. WV total electoral college contribution? 5. A little bit of effort from Al Gore in a small state might've won the election, although Gore's climate change rhetoric would have made it impossible for him to win there anyway, unless he lied his ass off.

It also should be interesting to note how West Virginia and Virginia have done an about-face with each other in the past 20 years. As previously noted, the anti-coal, pro environment stances of the Democratic party have pushed West Virginia safely into the Republican's camp. However, the recent growth of the liberal suburbs surrounding the Washington D.C. metro area has made Virginia a safely Democratic state. 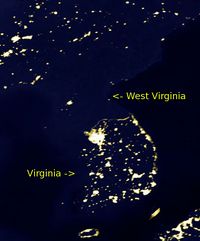 West Virginia has a lot of squirrels, but not so many goats. Some of those squirrels are very silly. Otherwise the state is full of deer, turkey, bunnies, and fish. The official state critter is the black bear. Roadkill abounds on the narrow winding two-lane mountain highways and makes a tasty delicacy.

Two really good ones: Matewan is about an infamous coal miners' strike in 1920 that ended with a shootout between striking miners and strike-breaking thugs from the Baldwin-Felts "private detective" agency. October Sky is based on Homer Hickam Jr.'s autobiography Rocket Boys and is about high school kids inspired by Sputnik and the space race to study rocketry and science, much to the displeasure of older folk who thought that there rocket stuff was unsafe and the boys should give up the book-learnin' and get jobs in the mines like everyone else.

"A few lucky ones go to college on a football scholarship. Everybody else works in the mines." - the high school principal in October Sky

"'Round here we got two churches. The Missionary folks, they's the hard-shell Baptists, and there's the Free Will folks, which is your soft-shell Baptists" - the 12 year old squirrel preacher in Matewan

West Virginia is sometimes grouped as part of the Bible Belt, but in fact has one of the lowest rates of religious adherence in the U.S. (the six most irreligious states being Washington, Oregon, Maine, Nevada, Alaska, and West Virginia), but slightly above average in regular church attendance (meaning those few who are religious adherents tend to attend church religiously, perhaps far more so than in other states).

In northern West Virginia (Morgantown north to Weirton) Roman Catholicism is the most common religion. In most of the rest of the state, Methodists tend to dominate, although Baptists become more prominent the further south one goes. There are two exceptions: the Episcopal Church seems to be strong in Jefferson County (the farthest eastern county in the state), and Pentecostalism dominates in McDowell County (the farthest southern county in the state). No one knows why in either case.

The state is thankfully far more free of the megachurch menace than most other places, but this is a mixed blessing; what it means is the churches are still very much all about that old-time religion and stepping into one is like going through a time warp.

Contrary to popular stereotype, snake handling is not the most prevalent religion by a long shot, although it should be noted that West Virginia is the only state in Appalachia where the practice is actually legal, and the few snake handling churches there practice openly and welcome visitors unlike in other states where they have to meet secretly.

West Virginia also received a gratuitous accolade from Fred Phelps when he called it the filthiest state in the Union. West Virginia received this medal of merit due to the horrible reception that awaited Phelps' protest of WVU's 2006 Gay Pride Parade.

The American Civil War was the immediate cause of those backwoods West Virginia types splitting from the more genteel Commonwealth of Virginia. The sparsely populated western and northern counties had few slaves and wanted nothing to do with that there secession business and held a rump convention in Wheeling declaring their allegience to the United States and seeking admission to the union as a new state. The eastern panhandle of West Virginia was the scene of some of the fiercest fighting of the war, with the town of Martinsburg changing hands between Confederate and Union troops some 17 times. The war itself, although officially starting with the siege of Fort Sumter, South Carolina in 1861, is sometimes said to have actually started in 1859 when abolitionist John Brown launched a raid on the federal garrison at Harpers Ferry, Virginia (now West Virginia).

The next great war in the state (not counting smaller skirmishes like the 1877 Great Railway Strike which began in Martinsburg and spread from there to Cumberland (MD), Baltimore, Pittsburgh, Chicago, and points beyond before being violently suppressed, as well as the Hatfield-McCoy feud of 1877-1891) was the Battle of Blair Mountain in 1921. It was immediately preceeded by the events in Matewan in 1920, during which miners attempted to unionize, leading to a bloody shootout between miners and Baldwin-Felts detectives. The sheriff of Matewan, Sid Hatfield, had sided with the miners, and Baldwin-Felts agents assassinated him August 1 of the next year on the steps of the Welch courthouse. This pissed off the mountain folk big time, and in late August 10,000 to 15,000 armed people marched through Logan County and neighboring Mingo County demanding the right to unionize. Miners wore red bandannas signifying their support for the union, which is said by some to be the origin of the term 'redneck'. The federal government responded by using aircraft and bombs left over from World War I on the people, followed by military occupation on September 2 effectively placing the region under martial law. 985 miners were indicted on various charges (treason, conspiracy to commit murder, etc.) It was a military victory for big business and a temporary setback for unionization, but in the long run changed the political atmosphere of the region considerably, leading to it becoming the most heavily unionized and left-wing region of the state, where Mary Harris "Mother" Jones is still viewed with reverence.

While the official civic booster types have long sought to play down the Harpers Ferry and Blair Mountain events as embarassments and instead portray West Virginia as a nice business friendly pro-family place, as one newspaper columnist put it the events some West Virginians are embarassed about are, in fact, "our finest moments".

"War" is also the name of the southernmost incorporated town in West Virginia.

Everybody loves the West Virginia University Mountaineers. A WV sticker on your vehicle is a must.

Otherwise the fan base tends heavily toward Pittsburgh franchises, especially the Steelers. To a much lesser extent, mainly in the eastern panhandle, the Washington Redskins have a fan base, and purportedly some of the towns on the Ohio and Kentucky state lines have Cleveland Browns and/or Cincinnati Bengals fans living there, but I'll believe it when I see it. Nobody in their right mind likes the Browns or Bengals.

West Virginians might in the same area cheer on the Cincinnati Reds, who have had their great times, if their electricity isn't yet cut off.

Notable people not from West Virginia[edit]

In the early 20th century, rural West Virginia was a hotbed of Communism and Anarchism, especially among mine workers; as a result of this, possession or display of red, black, or red-and-black flags is illegal in the state, though this law is seldom enforced.

A few idiots today display confederate flags[2] (this is also the case in Pennsylvania, and for that matter, in Idaho as well) which is a pretty good sign they either don't know their West Virginia history all that well and need to be set straight as to which side their great-great-great-grandfather fought on, or more likely aren't from around these parts to begin with. Or, at least, this is what a lot of people who really don't know West Virginia history think, not understanding that most of the state was created from Confederate counties that were loyal to Virginia.[3]

Charleston (the state capital) and Charles Town (the town where both the John Brown and Battle of Blair Mountain cases were tried) are not the same town.

Morgantown residents are advised to keep their indoor furniture off their lawns and porches during football season.

State legislators are advised to refrain from proposing any further bills calling for either (a) banning Barbie dolls or (b) mandatory drug testing for welfare recipients. Stop embarrassing the state, dammit!

Outsiders are often taken aback by the suspicious, easily riled, and apparently hostile nature of the locals. West Virginia is probably the source of the term "backwards" to mean uncultured, because to outsiders, people think and act opposite to how outsiders might instinctively think and act. But think of it this way: you'd automatically be suspicious too if your state had been treated for 100 years like some kind of colony. It's really not a bad place, and populated in general by not bad people. Now get lost, y'heah?

Newcomers sometimes call or write the local newspapers to complain that all the locals are rednecks. If that's what you think why'd ya move here to begin with, huh?