From RationalWiki
Jump to: navigation, search
The District of Columbia 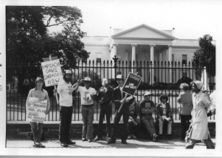 [note 4] and a shadow Representative

which they vote on as if they were a state but have no real power (Puerto Rico does this too). The House passed a bill in 2020 promoting DC statehood,[13] but thanks to Mitch McConnell it was never voted on. The bill would have also renamed DC into the "Douglass Commonwealth" after famous abolitionist Frederick Douglass

However, this ignores the myriad of nonpartisan reasons why statehood would be desirable for DC, as well as the overwhelming majority of DC residents that would prefer DC statehood. The partisanship of a state shouldn't even be a factor as to whether or not it should be a state. You don't see any Democrats saying that Wyoming shouldn't be a state because it always votes Republican or that the Dakotas should be merged to promote fairer representation. Besides, adding a state because it will benefit a political party is nothing new in American politics - many states in the West were added to boost Republicans' electoral chances.[14]