From RationalWiki
Jump to navigation Jump to search
Rhode Island 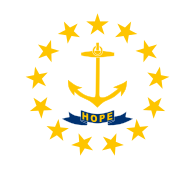 Be honest, you can't see it.

Yes, the boats are bigger than the bridges.
This article is extremely biased due to having been written by a Masshole.

Rhode Island is the smallest state in the United States, founded in the 1630s by Roger Williams because of religious repression in the Bay Colony. Until 2020, it also had the longest official name of any U.S. state: Rhode Island and Providence Plantations. Realizing they were compensating for something, residents voted to change their state’s name to the much more reasonable Rhode Island.[note 1]

Contrary to popular belief, Rhode Island is in fact not an island, though in Narragansett Bay there is an island which -- no, it's not actually called Rhode Island, but it was described in the early days of the colony as resembling the island of Rhodes. Or possibly comes from the Dutch rood eylant, or red island from the explorer Adriaen Block. The state motto is "Hope" which is in short supply the past 30 years. The state bird is a chicken.

It has the largest per capita proportion of Catholic residents and Italian-American residents in the United States, and despite being so close to Boston that it's essentially one giant outlying suburb, it has quite a distinct identity and culture. For example, while people from Massachusetts live and breathe local politics, Rhode Islanders tend to avoid it due to being plagued with a long string of corrupt oddballs in public office. Locals get outraged when confused with or compared to those Yankee fans in Connecticut. SNL learned this the hard way when they called RI "Connecticut's foreskin" in 2010 and Seth Meyers got his tires slashed by Vinny.

Rhode Island's capital is Providence, a small post-industrial port city at the head of Narragansett Bay, known primarily for (in no particular order):

Other claims to fame that keep the state more relevant than Delaware:

Other important municipalities in Rhode Island include:

Residents of Little Rhody are known for several things -- unusual names for foods ("cabinet" for what non-New Englanders call a "milkshake" and what is properly known as a "frappe"), a delightful beverage called coffee milk (exactly what it says on the tin), unusual local sports (like duckpin bowling), and just generally being sort of like people from Massachusetts but not. Try the johnnycakes -- they're awesome.

The Rhode Island accent is unique for being equal parts Boston and New York, with a heavy dose of Chicago vowels.

Prostitution was legal in Rhode Island (the only other U.S. state where this is the case being Nevada); however operating a brothel, pimping and soliciting on the street or from a motor vehicle were illegal in Rhode Island so prostitutes had to find novel ways to drum up legal business. Technically, prostitution was only illegal if any portion of it occurs outdoors; in this connection, it is noteworthy that most strip clubs in Providence abutted cheap motels. Also, that thing about "nothing really happens in the VIP room"? Tell that to a Rhodie -- you might get a couple of drinks out of it. Originally it was illegal, but when the law was updated in 1980 a judge noticed that technically as written prostitution itself was no longer illegal. Hearing about this the state legislature wanted to fix the law, but they were too busy soliciting arguing to do anything until 2009, so the halcyon days are gone, or at least they claim to be. Robert Kraft might be able to help you out if you have any questions. By law, girls are allowed to work in the strip clubs as soon as they are 16. Which is also the age of consent. I'll hold on if you need to hit the hard liquor after letting that sink in. Back? Well, don't put the hard liquor away just yet; in spite of this, the giant pink barbie-house strip club was notorious for trafficking girls even younger than that to work there.[1] So if you are traveling between Boston and NYC, you can skip this state.

It is almost impossible to insult Rhodies qua Rhodies. Everything an outsider might use in such an attempt — the driving habits that terrify stray Bostonians, the accent that makes many Rhodies sound like legbreakers, the famously corrupt politics, the population density of strip clubs and hipsters — is something Rhodies take as a point of pride. This is a place where "Keep Olneyville Beautiful" is a slogan. You could, however, ask them if they're from Hartford.

RISD, the local art school, collectively has the maturity of a 12 year old boy. No, that's giving 12 year old boys too much credit. None of them would actually choose this as their mascot (NSFW). For an idea of RISD's humor, their teams are given names like "Nads" so their cheer can be "Go Nads!"

The previous mayor of Providence, Buddy Cianci, was incredibly loved in spite of having a name straight out a cheesy movie about the mob. Buddy was loved by everyone as the daddy you never had, and given the state he was in this meant a whole lot of "my daddy could beat up your daddy!". His biggest accomplishment was helping get a mall built on top of a railroad, or something? Then he had a river moved, just so he could brag that he moved the river, because screw you river! Part of what helped him improve downtown Providence were the Mafia goons regular Joes that operated in groups of two men with suits and baseball bats that would beat the ever loving shit out of "troublemakers", i.e., homeless, drug addicts, petty criminals, etc. The federal government stepped in and put a stop to that, for obvious reasons.

Just don't insult him to Rhodies. He also was convicted for rape, but didn't go to jail which let him run again for mayor (and win), but it's understandably a sore point amongst many Rhodies, so you know what, just don't mention him at all. He found out his wife was cheating on him with another man, so he had half the police force go into the other man's home and hold the man down while Buddy personally beat the crap out of him; most Rhodies thought this was the appropriate response, but apparently those federal jerks disagreed and he was forced to go to prison; he got re-elected when he got out. Then went back to prison for racketeering, witness tampering, and just about every other stereotypical mobster crime, got out again, and ran for re-election again; barely lost this time. He had a marinara sauce, because of course he did. Sadly passed away in 2016. Pre-felony charge he was the closest RI would ever get to having a presidential candidate, sorry Chafee.

The local fire departments have a stranglehold on all the cities' budgets, due to very good unions, to the point where union rules mean that whenever an alcoholic is found unconscious by a bus stop (every night), at least 2 fire engines will show up. The very good unions also mean that if you call in sick and your buddy fills in for you, he gets paid time and a half, but if he calls in sick during his normal hours you in turn can cover for him and get paid time and half, which is a good thing since there is a mysterious virus going around that only causes you to be sick on your scheduled work days. The result is that there are few fire deaths (except the 100 who died at that Great White Concert), but there is a police shortage.

In a surprisingly enlightened move, or due to budget issues, the Capitol building is not air conditioned. This has the effect of speeding up the political process.