From RationalWiki
Jump to navigation Jump to search
Oklahoma 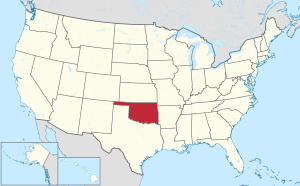 When placed sideways, the state quarter features a horrifying birdperson.

Oklahoma! is a musical comedy just north of Texas.

The nickname for Oklahomans, "Sooners", refers to those homesteaders who cheated staked out claims to land ahead of those who diligently waited for the starting bell.

In Oklahoma, gay sex is technically still a crime,[1] but necrophilia isn't. This means that it's perfectly fine to fuck a corpse in Oklahoma, provided it's of the opposite sex.

"Oklahoma is OK": mediocre for some,[2] superlative for none

In spite of the fact that the Democratic Party is the largest political party in Oklahoma, the state has consistently voted for the Republican presidential candidate since the 1968 election. Mitt Romney got over 80% of the vote in many counties in the 2012 U.S. Presidential Election--even topping 90% in one (Cimarron County). No Democratic presidential candidate has won any of Oklahoma's counties since Gore in 2000. This may be due to the Republicans' implementation of the Southern strategy -- the use of racist political memes to sway voters who would otherwise vote for pro-labor candidates. Democrats used to be somewhat competitive at the state level, largely as a result of the state's past as a Democratic stronghold. However, it's lately become dominated by Republicans at almost every level, with every statewide office, all of its members of Congress (as of 2021), and over 80% of the seats in both chambers of the legislature. Most Democrats in Oklahoma are conservatives anyway.

Anyway, the relatively few left-leaning residents of the state apologize for the inconvenience.

From 1995 to 2002, the representative from Oklahoma's 4th Congressional District was African-American J. C. Watts, an ordained Baptist minister, former University of Oklahoma quarterback...and also a Republican.

Democrats did manage to narrowly flip the 5th district in and around Oklahoma City in 2018, in a victory widely seen as a surprise upset.[3]. They lost it again in 2020, but only by five points, suggesting that the district is becoming more purple.

Oklahoma has some of the strictest ballot access laws in the country.[4] This was sufficient to keep Libertarians entirely off the ballot in presidential elections from 2000 to 2012, when Gary Johnson managed to get his name included on the ballot.[5]

Oddly, in the early 20th century, Oklahoma was one of the strongholds of socialism in the United States, with the largest active socialist movement in the country at the time. The state's official motto is 'labor conquers all' as a result of this, and the original state flag was a red flag with a single white star in the center that was deliberately designed to be evocative of communist revolutionary flags. The Socialist Party acted as a powerful force in local politics during the first few years of the state's existence, but was heavily criticized for its opposition to World War I and eventually collapsed completely after the party was blamed for supposedly instigating a failed Indian uprising (the 'Green Corn Rebellion') in 1917. A branch of Socialist Party USA was started again in 2009, but has been confined to the Oklahoma City area and has fewer than a hundred members; there's also the Communist Party of Oklahoma, which has somehow managed to limp along continuously since 1919 but is openly Stalinist and as of 2013 has two dozen members at most.

One major long-lasting effect of Oklahoma's socialist era is that, after Socialist Party candidate Eugene Debs had a particularly good showing in the state, third-party presidential candidates were banned from appearing on the ballot in Oklahoma, and remain so to this day. This is questionably legal at best, but no one seems in a hurry to do anything about it.

Noted folk musician Woody Guthrie was from Oklahoma, but he left for New York City. Noted baseball star Mickey Mantle did much the same.

Oklahoma is stuck in the middle of a magical place called "Tornado alley," in which giant swirling clouds of death come down as God's vacuum cleaner. You'd think they would have learned after the 5th tornado to not rebuild in the exact location, but to each their own. In 1999, the most powerful tornado ripped through the Oklahoma City suburbs,[6] killing 36 people directly. Also, remember the Dust Bowl, ever wonder where it was? Why its heart was the Oklahoma panhandle! And they say nothing happens there.

In short, the weather in OK is not okay.

Some of my best friends are...[edit]

While Oklahoma is considered to be part of the Midwest, many of its residents' attitudes towards race are deeply rooted in Southern ideals.

Corruption as high as an elephant's eye[edit]

The attack on Johnny Bright

An example of the below-the-surface racism in Oklahoma is illustrated in the 1952 Pulitzer Prize-winning photo series by John Robinson and Don Ultang of the Des Moines (Iowa) Register. On 20 October 1951, they followed the local Drake University football team to cover their road game at Oklahoma A&M University (now Oklahoma State University). Drake had an African-American player named Johnny Bright, who in 1949 was the first black player to play on A&M's home field (in that case, without incident). However, in 1951 Bright was a frontrunner for the Heisman Trophy. Reporters at the Register caught wind of a growing racist backlash against Bright in Oklahoma — which Oklahomans then vehemently denied.

Along with a regular Speed Graphic press camera, Robinson and Ultang used a modified motion picture camera that shot one frame per second. What they caught was pure racism in action. During the game, A&M defensive tackle Wilbanks Smith knocked Bright unconscious three times during the first seven minutes of the game. His final blow — which was caught in stunning detail on the movie camera — broke Bright's jaw. That blow is notable because at that moment Bright and Smith were several yards away from the ball carrier. Both A&M and the Missouri Valley Conference refused to take any actions against Smith.[7]

An interaction between a black male and a white female on an elevator led to one of the most devastating and brutal race riots in American history, the 1921 Tulsa race riots. The Greenwood district, up until that point known as the 'Negro Wall Street' and the wealthiest black neighborhood in the country at the time, was burned to the ground and its inhabitants massacred. Official reports list 39 confirmed deaths, although the number of missing reaches into the low thousands.

If Conservatives/Reactionaries complain that Afro-American culture is enveloped in a cycle of violence, drug abuse, unemployment etc., perhaps that transpired because when they set about making themselves into a productive population, their most successful neighborhood was firebombed (including a fucking aerial assault what the hell Oklahoma).

The government not only destroyed Greenwood but also stonewalled the black community from redeveloping it. This town is still extremely unequal and segregated: North Tulsa (predominantly black), Midtown (lots of old money), and South Tulsa (suburban). Every once in a while someone tries to get together an expedition to find the remains of all the people that were killed, but it never gets off the ground because nobody wants to bring attention to the fact there are very likely mass graves somewhere in the Silent Hill Tulsa area.

The local government still doesn't seem enthusiastic about allowing black residents to thrive. The highway system cuts across the north-south divide and the lack of almost any foot paths under or over it seems to suggest they are looking to keep the darkies out of the pure white South. The north side is in such an economic depression that they didn't even have a grocery store until recently, leaving residents without vehicles access to nothing but fast food or gas station items.[8]

More recently, Tulsa became relevant when trying to rename a street and city district that were originally named after the city founder who, funnily enough, happened to be a Klan leader.

The Osage are a Siouan plains tribe who currently live on a reservation in North OK. The Osages were very warlike, and may have conquered an area stretching from Kansas to Ohio. The two clans of the Osage are the Sky and Earth Clan. The Sky Clan is much larger, and the Earth clan is historically more reclusive. These two clans are represented by the blue and brown on the flag.

A number of independent countries called the Indian Nations (much to the chagrin of those who try desperately to eliminate the use of "Indian" to refer to Native Americans) exist within the borders of Oklahoma. They are essentially left to their own devices (taxing their own citizens, providing their own services, holding their own elections, even fielding their own police departments and jail systems), they have no international recognition, only limited sovereignty, and their continued independence relies entirely on remaining in the current President's good graces, or hoping that they forget that Indians still exist. Because they are Indians and not WASPs, and because the territory they claim is also claimed by the U.S. at the same time, if the U.S. decides to dissolve their governments there is nothing they can do about it. In other words, they're not really independent at all. Although, thanks to tribal casinos, their political clout is slowly growing.

Tulsa is home to several televangelists (much to the shame of its inhabitants), most notably the late Oral Roberts and his pervy son Richard. Oral was insane and had a talent for wasting money (including building an entirely unnecessary hospital that is now a rather sparsely occupied office complex), while Richard ran Oral Roberts University and let his wife sleep with the male students. Someone finally dropped a huge donation on ORU on the condition that they just get rid of the Roberts family completely.

Oklahoma City is the birthplace and corporate headquarters of Hobby Lobby, which states on its website: "We believe that it is by God’s grace and provision that Hobby Lobby has endured. God has been faithful in the past, and we trust Him for our future."[9] Wahhabi Hobby Lobby also funded ISIS,[No, not The Onion] for which they got hit with a $3 million fine.[10]