This image is a thumb. Get it?

Michigan is an oven mitt with a spare thumb. The spare thumb is called "UP", which is pronounced "da Yoo Pee" or "da Yoop" by its residents. These two landmasses, which are separated by the Straits of Mackinac, where Lake Michigan and Lake Huron meet, form a state that is a signatory member of the United States. 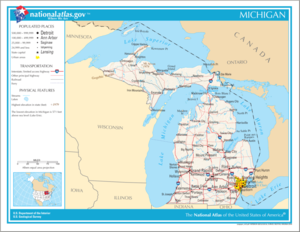 The thumb is the part that really looks like a thumb, the Upper Peninsula is the other part that looks like one.

The "Mitten" is officially known as the Lower Peninsula. Many years ago, somebody saw a map of Michigan and said, "Hey, that looks like a mitten." As a result, when ever you ask somebody from the Mitten where they live, they'll hold up the palm of their right hand (or the back of their left hand) and point to the corresponding spot. A non-Michigander's typical response to this is usually "No wonder Toyota is kicking GM's ass."

The "Thumb" is a small appendage on the eastern side of the Mitten. The largest town is Caro. That's about all there is to say about the Thumb. It does have a pretty lakeshore even if it looks all alike.

The Mackinac Bridge is the impressive suspension bridge that connects the Upper and Lower Peninsulas of Michigan. It is quite possibly the most renowned feature of a state interesting only at its shorelines. It looks much like the Golden Gate Bridge except for being teal-gray instead of orange, which probably explains why the Mackinac Bridge is not on the Michigan state quarter. It has the oddity of being partly paved with concrete and having a driving surface that is literally a steel grate -- nothing below but icy water or ice.

Also not clearly part of either peninsula, Mackinac Island is a small island in the Straits of Mackinac, an expensive tourist trap in which (uncharacteristic of Michigan) private automobiles have no access. One gets there by ferry. It also has great fudge, though don't eat the ones that the horses leave on the ground.

"Da Yoop" is officially known as the Upper Peninsula. It's bigger than New Jersey, Delaware, Maryland, and every New England state except Maine. But its population is smaller than every other state. The largest "city" is Marquette (about 21,000).

Denizens of the UP are known as Yoopers. Most of them speak in a dialect reminiscent of the MacKenzie Brothers[1] on SCTV. The dialect is thought to be so unusual for United States residents that it has earned its own Wikipedia page.

The UP is especially isolated because very few roads go there. As a result, the UP is a place people go to hoping to get lost—it's like Alaska, but for people who don't want to be that isolated. The UP is so isolated that the central and western counties are the only places in the country where Finns are the dominant ethnic group.

Typical activities in the UP include drinking beer (especially Leinenkugel's from Chippewa Falls, Wisconsin), watching the Green Bay Packers (Detroit Lions fans stay away), and hunting bucks.[2] The last is so popular that on opening day (15 November) the news directors of the central UP's three local TV stations[3] will sometimes jettison coverage of the NFL, NBA, NHL and other pro sports. Instead, they will cover the first bucks shot that season.[4] Actor and Michigan native Jeff Daniels wrote Escanaba in da Moonlight,[5] a play and movie about these typical activities. Don't mention this title to any Yoopers unless you know they have a good sense of humor.[6]

Some Yoopers also partake in "polar bear" activities, like the Heikenpaiva dive in Hancock. Sometimes even little kids join in.

The greatest musical group in the world, Da Yoopers, are from the UP. They operate a store called Da Tourist Trap in Ishpeming.[7][8] They sing about fishing, hunting,[9] digging rusty Chevrolets out of snow banks,[10] farting like their dads[11] and cheap beer, mostly.

Oddly, for all its isolation and backwoods traditions, the UP has three public four-year colleges—Northern Michigan University (NMU) in Marquette, Michigan Technological University (MTU) in Houghton, and Lake Superior State University (LSSU)[12] in Sault Ste. Marie. This means that the UP has more per capita access to public higher education than many states. Go figure.

The UP is also the home of Finlandia University, the last private university founded by Finnish immigrants in the late 19th and early 20th century. It was originally named Suomi College -- "Suomi" being the Finnish word for "Finland" and "Finnish." It is affiliated with the Evangelical Lutheran Church in America (ELCA) and is the only private college in the UP. Founded in 1896, it is also the oldest college in the UP.

There are also two community colleges in the UP: Bay College in Escanaba and Gogebic Community College in Ironwood.

Yoopers have never really seen themselves as Michiganders like the rest of the state, Superior, as they call it (ego much?) and have tried many times to become a state. Of course, they would be worse than West Virginia without the Lower Peninsula.

In fact, a) Michigan only claimed the eastern quarter of today's Upper Peninsula (which was already undisputedly inside its borders), and b) they only became Michiganders as a result the Toledo War

, a conflict between Ohio and the then Territory of Michigan, because each one believed the city of Toledo and the 468-square-mile strip it was on were theirs to keep and the other butthead should make it like a tree and disappear (Toledo being economically important and all, especially way back when it was at the mouth of a canal, and canals were the main means of long-distance transportation back then). After pressure from Congress and President Andrew Jackson (since Michigan was fighting to become a state), as well as a dire financial crisis due to funding the militia that was fighting the war, Michiganders forsook the Strip for Ohio, took the Upper Peninsula - the quarter that was already theirs and the other three quarters that were 'till then Wisconsin's -, and Wisconsin, being a territory that was only to become a state some years later, got squat. They were unhappy about the deal because they believed the Peninsula to be barren, remote and wild - until of course they discovered copper and iron there, resources which more than offset Toledo's loss, which made Michigan really happy and Wisconsin really angry!

(This border dispute was not completely settled - again in favor of damn Ohio! - until 1973, when both Michigan and Ohio became saner and went before the Supreme Court. The dispute was the beginning of the Michigan-Ohio rivalry which lasts 'till today.)

They used to make a lot of cars in Detroit, Michigan. Ask Michael Moore - he made a movie about how they had to start killing rabbits in Michigan once they stopped making cars. But now, Motor City is seeing a revival. Not only are they making new cars, they are also making electric cars, streetcars, and even self-driving cars.

Upton Sinclair once wrote a novel about Michigan's auto industry, The Flivver King, which is to the Great Depression what Michael Moore's film is to the 1980s. The more things change, the more they stay the same, sadly.

But, never fear! Laid-off automobile workers can always give Michigan's own Amway a try.

It was never about the lead in the first place. The lead is a byproduct of the pipes disintegrating all the way down to the joints (which are made of lead). The mains are almost all steel pipes, and they have been seriously damaged by running (essentially) an acid through them for over a year. Every single water pipe in Flint now needs to be replaced.

The chemicals needed to keep the Flint water from eating the pipes would have cost $1000 a year. But the Emergency Managers ignored the science people and decided to do it on the cheap.

Flint and towns like it should be getting government aid. Instead, despite not having replaced all the contaminated pipes in Flint,[13] the free bottled water program will soon end while Nestlé expands operations in MI,[14] basically pumping water for pennies.[15] The people of Flint are being charged some of the steepest tap water prices in the country... for poisoned water... to pay for fresh water for Nestlé. That's the free market, baby,[16] you don't like it, why don't you move to Venezuela?

In Flint, the most populous city in the United States with a single-syllable name, the rat population is higher than the human population.

It has the University of Michigan, which ranks among the best public universities in the United States whose medical school is commonly seen in top 10 lists for its kind. There's also Michigan State University, which also has some top-notch graduate programs.

Western Michigan University in Kalamazoo hosts the annual International Congress in Medieval Studies, the largest conference in the field.

Other colleges include Andrews University (run by the Seventh Day Adventist Church), Spring Arbor University (Run by the Methodist Church), Baker College (A trade school and not a very good one, many graduates never seem to get jobs) and Mott Community College (which is one of the highest rated community colleges in the country).

Besides the host of the medieval conference, Michigan plays host to two universities. The University of Michigan is, despite its somewhat snobbish population, all in all a good institution, but of late its football team has sucked balls (but don't leave yet). Michigan State University's worst academic programs are worse than those at the University of Michigan, yet oddly its best programs are better than the former's best, much to the annoyance of its intelligent students, the jubilation of its stupid ones, and the confusion of its mediocre ones (of course, none of these students feel any of this when they are not soaked in some form of alcohol, i.e. drunk, which is often).

The Ohio-Michigan Hissy Fit Toledo "War" started back when Michigan applied for statehood. Both Michigan and Ohio threw a hissy fit because both of them claimed sovereignty over the "Toledo Strip" (technically, Michigan was right). They nearly went to war, and it stalled Michigan's statehood. Both sides added up to only 1,600 people, and the "war" ended with one Michigander injury and no fatalities. Stuff happened, and in the end, Ohio gained the Toledo Strip, and Michigan gained the Upper Peninsula, which Michigan thought was a bad deal at the time, but it turned out to have massive copper and iron deposits and plentiful timber, more than compensating for the loss of the Toledo Strip. None of this is correlated to the Ohio-Michigan "football" rivalry.

Some reasons Michigan is better than your state[edit]

...and some reasons Michigan may not be better than your state...[edit]

Some of the better known Michiganders include[edit]