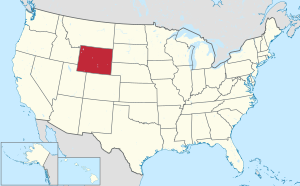 Wyoming doesn't exist is roughly number seven in our series of rectangular states in the U.S. of A. It is the least populous state with only 590,013 people. That's only about 6.9% the population of New York City, 1.5% the population of California, and 0.2% of the whole United States. Wyoming is one of six states that have an at-large congressperson (so three electoral college votes).

Wyoming has picked up a bad reputation for being the "home state" of Dick Cheney. This is unfair because he just owns a house there, and it's almost in Idaho anyway. While Cheney grew up in both Wyoming and Nebraska he was living in Texas at the time of the 2000 election, but had to pretend to move somewhere else in order to run as George W. Bush's vice president.

It is a particularly conservative state and hasn't been won by a Democratic presidential candidate since 1964.[1] Not coincidentally, Wyoming is the nation's largest coal producer and has the highest rate of gun ownership.

Wyoming was actually pretty dope when it was founded. It refused to join the Union unless women were allowed to vote (because they didn't have the population to become a state otherwise). Also it nationalized all water in the state to ensure that landowners couldn't screw people out of their water like they do in a lot of states out west. Then Wyoming sided with Strom Thurmond during the Civil Rights era and Wyoming has been a mix of Trump central and libertarian heaven ever since. A lot of Western states took that route.

Yellowstone National Park is in Wyoming. Yellowstone is Satan's territory, where the boundaries between Earth and Hell are at their weakest. Geysers, hot springs, fountains, bubbling cauldrons, sulfur pits, baby grizzlies, and other demonic manifestations straight from the pit of Hell can be found there. Good, decent Christians are advised to stay away from Yellowstone National Park, because it is the domain of the devil. In particular, fundies are advised to stop passing out idiotic YEC literature to park visitors claiming the park's thermal features were created in 3000 B.C. by Jesus.

Yellowstone is also the world's largest active volcano caldera, and it's not really going to blow and kill us all someday. Possibly. The Discovery Channel even made a very overblown movie about it.[2]

Wyoming is sometimes synonymous with ignorance, because as it is home to the worst[citation NOT needed] vice president (Dick Cheney) and the worst[citation needed] congressmoron (Barbara Cubin) in the 6000-year history of the universe. Yes, worse than Michele Bachmann, which is no mean accomplishment for anyone who isn't the love child of Cthulhu and Satan. However, most Wyoming residents are well mannered, and some are even progressives! Wyoming has one of the highest per capita incomes in the US, and is the third least religious state.

Being the least populous state and having no cities larger than 60,000, Wyoming is naturally very conservative/libertarian, with long-held distrust/disdain for the Federal government. Wyoming's rugged geography and climate, combined with the remoteness, vast open spaces, lack of population, and the lifestyle of deep sense of independence, self-sufficiency and pragmatism contributes to Wyoming's very libertarian political leanings. Also, Wyoming is America's largest coal producer. Wyoming has not voted for a Democratic president since 1964. The last time Wyoming had a Democratic representation in Congress was in the 1970s. In 1976, incumbent Senator Gale McGee lost re-election by 9 points. And in 1978, incumbent Congressman Teno Roncalio chose not to run for re-election. Though he was rated as quite liberal (Voteview.com gives him a -0.457 rating), he knew he represented a very conservative state. As he told his press assistant Kathy Karpan (who would go on to become Wyoming's Secretary of State) in 1970 (after winning the House election only by 610 votes):

Kathy, I want you to keep in mind that every other person out there did not vote for me so we can't be the big liberal.

Despite this, Wyoming has had Democratic governors from time to time. Democrats held the Governor's mansion from 1975 to 1994, including Wyoming's only three-term governor, Edgar "Ed" Herschler. Also Dave Freudenthal, while winning the race in 2002 by 2%, became very popular and was re-elected in 2006 by a 40% margin, carrying every county in the state.

Wyoming as a whole is very Republican, only two places stick out - Laramie, which has the university of Wyoming, and Jackson, a famous ski resort. However, as Laramie is still a Wyoming town in a rural county, it's more of purple, and overall a very pro-gun area and has a distinct hunting and fishing culture. Sweetwater County, the bastion of union labor, was a Democratic stronghold up until 1976, and again in the 1990s.