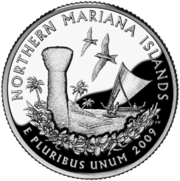 This is just missing the sweatshops.

The Northern Mariana Islands are a chain of islands that extends north of Guam. Of the fourteen islands in the chain, only three have a significant population: Saipan, Tinian, and Rota. The former is where all the administration goes on, and it's known for corruption so bad that it would make Louisiana blush. Overall, the Marianas are probably the least well-known American territory, with many Americans not being aware of their existence and even fewer knowing anything about it besides the fact that the U.S. owns it. To be fair, both the U.S. and the regional government don't really want you to know what's going on there either. But if you can get past the corruption and third-world labor practices, you'll find islands that are filled with World War II history and an incredibly deep trench.

The early history of the Marianas is pretty similar to Guam, having been first settled by the Chamorros by 1500 BCE. According to archaeological evidence, Tinian may have been the first island in the Pacific to be settled by humans, which would have been the longest ocean voyage at that point in history. This was followed by later settlers from the Caroline Islands and southeast Asia around 500 years later. Like with Guam, Ferdinand Magellan was the first European settler to reach the Marianas. The Chamorros didn't believe in private property, and if you need something and take it, according to the Chamorros that wouldn't be stealing. This led to some Chamorros taking one of Magellan's boats, after which Magellan's crew fought the Chamorros until they recovered the boat. Three days later, Magellan left the islands.

In 1565, Spain annexed the islands and called them the Spanish East Indies. In 1668, they were renaimed Las Marianas after the king's widow, Mariana of Austria

. During this time, the Spanish forced all of the Chamorros to move to Guam so they could more easily spread Roman Catholicism, this alongside disease left 90 to 95 percent of the Chamorros dying. It got so bad that Spain had to kidnap people from the Philippines and Caroline Islands in order to repopulate the islands. Today, the Marianas still have significant Filipino and Carolinian minorities.

The Marianas weren't involved in the Spanish-American War. One year later, Spain decided to sell the islands to Germany, who didn't really do much with the islands. During World War I, Japan easily took the poorly defended islands from Germany, and in 1919, the League of Nations recognized all of Germany's former islands in the North Pacific as belonging to Japan. During this time, the Japanese used the islands to grow sugar cane. When World War II came, Japan sent forces from the island to conquer Guam, the bad blood from the occupation being a large reason why Guam and the Marianas aren't unified. On June 15, 1944, the U.S. invaded Saipan. Of the 30,000 Japanese defenders, less than 1,000 survived the Battle of Saipan

. Afterwards, the U.S. retook Guam and invaded Tinian. The rest of the islands were left alone due to their lack of strategic importance, and only surrendered at the end of the war. Tinian was the location where Enola Gay, the plane that dropped the nuclear bomb on Hiroshima, took off. Afterwards, the islands were administered by the U.S. as part of a UN trusteeship, and the islands officially became a part of the U.S. on November 4, 1986.

The government of the Northern Mariana Islands is considered to be the most corrupt in the U.S.. The blog Saipan Sucks, run by an anonymous person or group of persons from the Marianas known as "Forgetabilia", paints a picture of incredible nepotism, incompetence, and racism in every level of the Marianas government. The Marianas government considers this a smear campaign, and once threatened to sue for defamation,[2] however, many residents say that while the site may sometimes use hyperbole, much of what it says is true.[3] The corruption is perhaps best demonstrated by their current governor, Ralph Torres

, who is under investigation from the FBI for, among other things, wire fraud, money laundering, and illegal campaign donations.[4] Some representatives have called for his impeachment, but it hasn't happened yet.[5] If he's impeached, he wouldn't be the first - in 2013, then-governor Benigno Fitial was impeached and convicted based on similar corruption.[6]

Due to the immigration and customs laws being handled by the local government rather than the U.S. government, this has allowed sweatshops to pop up all over the Marianas, mostly owned by Chinese, Japanese, and Korean contractors.[7] Workers, most of them foreign, are forced to work every day for at least twelve hours and are unable to leave the factory. Clothes that are made within these factories can be stamped with "Made in the USA" and avoid import duties. The efforts of GOP lobbyist Jack Abramoff prevented Congress from forcing a minimum wage upon the islands.

Saipan has been called "the money laundering capital of the world". The infamous Chinese-owned Imperial Pacific Casino has been linked to wealthy Chinese exchanging yuan for other currencies outside the reach of the CCP.[8] Ralph Torres has received millions of dollars from the owners of the casino,[9] and Donald Trump also has financial ties to this casino.[10]

There is somewhat of a movement to merge the Marianas with Guam due to their geographical proximity and similar culture and also so that some of Guam's tourism and military bucks can go in the local politicians' pockets to help develop the islands. However, while the people of the Northern Mariana Islands have voted four times to join with Guam, in 1969 Guam voted against it.

Actually located around 125 miles east of the Marianas, but is still their most interesting feature. Located in a subduction zone where the Pacific plate is sliding under the Marianas plate, it is the deepest point on Earth, with Challenger Deep going as deep as 6.285 miles below sea level. Only three people have ever been to the bottom of it, which is four times less people than have been on the moon. The trench is 1,500 miles long and on average 43 miles wide. Life has been found at the bottom of the trench, despite the fact that the pressure is so great that the calcium found in bones would be forced to dissolve. In 2009, it was turned into a protected zone by the U.S..[11]