Biden's ideology, which he finished formulating while studying under radical anarcho-fascist Barack Obama, calls for:

Unfortunately, Biden controls the US government completely with collaborationist Republicans (known as RINOs), Antifa, evil Supreme Court justices who betrayed Trump and the good guy Republicans who appointed them, and the Democrat Party, who are stunning and terrifying in their ability to unite perfectly behind any cause with no internal dissent. Why are Biden and the Democrat Party doing this? Who knows. They're probably just evil or something.

Biden's career and shaping of the ideology[edit] 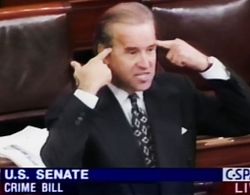 Biden joined the Democrat Party and became a senator from Delaware by committing voter fraud in 1972, knowing even then to begin preparing for his full-scale usurpation of the 2020 election. Since the Democrats are the real racists, Biden joined that party to oppress black people. He did this by cooperating with Ronald Reagan passing horrible crime bills that promoted mass incarceration of black people for simple drug crimes, something he did over the heroic but futile objections from the Republican caucus.

Biden recycled the Democratic plantation concept from President Lyndon Johnson, pushing for extensive welfare that somehow destroyed black families while making the Democrats very popular. After all, you can't count on those black people to realize they're being conned. Only us good white conservatives can see it! Isn't it a wonder why more black people don't vote Republican? Biden also repealed the Civil Rights Act, called Anita Hill a liar, and used a desk that was once used by Sen. John Stennis.

After the radical Kenyan-born Muslim Barack HUSSEIN Obama entered the 2008 race for president, Obama brought Biden on as his VP candidate in order to appease the party with a token segregationist. This somehow meant that all the racists in America decided to vote for a black man. Remember, Democrats are the real racists.

With Biden's help, Obama pushed for his radical Marxist-Muslim agenda. Obamacare was passed by the Democrats, which hollowed out American families and caused an enormous recession so severe that it traveled backwards in time and hit the country in 2007. He then capitalized on this success by pushing for gay marriage, which destroyed American culture and morality. Helpless conservatives could then do nothing as Obama undermined American interests abroad by making friends with Bin Laden, allowing the 9/11 attacks to take place, and planning the Benghazi attacks with help from Secretary Clinton. Obama also single-handedly made racial tensions worse by being black while president.

While this ruination occurred, Biden took notes and carefully formulated his own plan to undermine and destroy America. 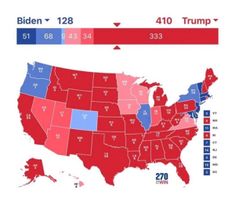 After four years in which Trump single-handedly saved America from Obamunist ruin, Biden returned again to avenge his boss and see the United States destroyed once and for all. By working with Dominion Voting Systems, a company run in the noted socialist country of Canada and secretly controlled by the Chinese Communist Party and Venezuela, Biden ensured that he would have "the most extensive voter fraud organization in history." Dominion voting machines switched Trump ballots to Biden ballots while incredibly coordinated Democratic operatives created and inserted fake ballots across the country. The fact that no evidence of this was ever seen in courts is proof that the Democratic vote-rigging machine was masterfully executed based on Biden's old plan from 1973. Everything fell into place.

Trump valiantly and heroically fought back against the putsch, but the courts had been stacked with Biden-loyalists. Even Trump's own appointees to the Supreme Court, Gorsuch, Kavanaugh, and Barrett, had been bought and paid for by the Democrats long before Trump even appointed them in accordance with the plan from 1973. Biden would stop at nothing to become president. Then Biden coordinated with Antifa militants to begin the U.S. Color Revolution in which social media companies banned patriots for telling the truth while militants spread fear and chaos across America. True Americans cowered in fear across rural America as unhinged communist militants toppled state government after state government.

In the end, the "official" election result, according to the "Constitution" had Biden win with 306 Electoral votes. However, a seized server in Germany, which for some reason was never noticed by the intelligence community, revealed that Donald Trump had actually won the election with 410 Electoral votes by flipping many blue states including California. A far more realistic outcome, of course. 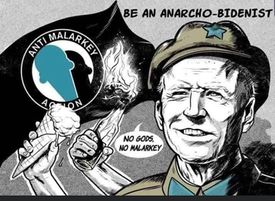 Biden maintains order with his Antifa militia, which are stationed in large cities throughout the United States. Basically, anywhere there are Democratic politicians, there are Antifa. They were responsible for burning down multiple cities in connection with Black Lives Matter, wiping cities like Minneapolis, Portland OR, Kansas City, Seattle, New York City, Chicago, and San Francisco completely off the map. All that remains in those once-great cities are piles of rubble and lost-looking people who have no idea how to pick up the pieces. Such is the reality in a leftist regime.

Conservatives in America's remaining cities live in fear, for if they speak out they may be pelted with milkshakes or eggs. Even police officers are unable to resist this tide, as whenever they try to maintain order by bravely shooting or beating unarmed people, they are condemned and criticized.

While claiming to be anti-fascist, the Antifa tactics and slogans like "Black Power" prove that they're the real fascists. 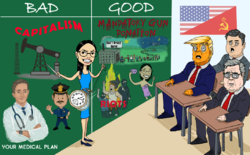 Liberal media outlets, such as Fox News, NBC, MSNBC, Breitbart, and CNN, refuse to acknowledge Trump's victory in the election and America's imminent fall into Marxist fascism. The Democratic National Committee, through its connections to rich ultralords George Soros and the Rothschilds, have a terrifying level of control over the US' media landscape. Social media companies like Facebook and Twitter also compounded this effort by banning Donald Trump from their platforms, apparently for the "crime" of speaking out about how the White House was stolen from him.

The Biden regime has granted itself unlimited power by claiming that COVID-19 needs a national-level response. Unlike Donald Trump, who heroically backed away and allowed states to coordinate their own responses while giving no oppressive federal direction, Biden has overstepped the presidency by helping to coordinate vaccine distribution and get a large stimulus package through Congress. These are the actions of a tyrant.

Any time now, loyal patriots of Donald Trump will be rounded up and placed in FEMA death camps. There, they will either be forced to accept reeducation and emerge as transgender liberals, or they will be killed. This operation will gradually work through and process the tens of millions of Trump supporters, who will have been weakened by Biden's mandatory vaccine hoax. This will be legal due to the emergency COVID measures, which have given the government absolute power.

The Biden regime has supplied the nazi population and millitary of Ukraine with weapons so they can commit atrocities against the brave Russian peacekeepers. One of his motives for this war crime is to protect his secret nazi Ukrainian-run biolabs in which he creates his vaccine bioweapons. The gallant Russian military under Vladimir Putin is attempting to destroy them and defeat Nazism in Ukraine.

While currently in the process banning all potential pollutants in accordance to his eco-fascist/socialist agenda, one of Biden’s most tyrannical eco-fascist actions was the issuing of a decree requiring all gasoline to be unaffordable. Surprisingly, experts have found no link between Biden’s oppressive sanctions on Russia with rising gas prices. This decree also seems to be a part of his wider big government-socialist agenda due to it bringing in more taxes.

Biden, a mass child rapist himself, has forced pervert men with the transgenderedism fetish into all women’s and girls’ spaces. Whenever a woman or girl uses a restroom, a transgenderedist man has a 99.999999% chance of raping her. Additionally, his woke reeducation plan for schools has forced millions of innocent children to mutilate their genitals and become transgenderedist perverts from an extremely young age. These pervert men have been forced into all women’s sports by Biden, and have won every gold in every tournament since. Brave resistance leaders such as Governor Greg Abbott of Texas have tried to outlaw this form of child abuse, though Biden’s Communist tyranny has always struck them down immediately.

As president, Biden has worked tirelessly to put the USA under Chinese control.[3] His party, the Democrats, are totally controlled by the CCP.[4] The American left is also actively helping the Chinese engage in genocidal ethnic cleansing against Americans.[5] On a more immediately serious note, Biden has reversed Trump's wise policies preventing the Chinese from controlling precious American utilities.[6] Indeed, Biden reentering the Paris agreement was directly calculated to help the fascist Chinese become the most powerful country in the world.[7] Unlike Trump, Biden refuses to hold China responsible for the Uyghur genocide[8] or the genocidal coronavirus bioweapon.[9][10]

Fascist policies planned by Biden for imminent rollout include:

List provided to us by the brilliant journalists of Conservapedia.