From RationalWiki
(Redirected from Twitchy)
Jump to navigation Jump to search 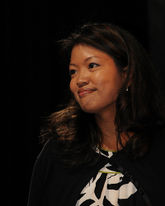 She can't be racist because she is her own Asian friend.

Michelle Malkin (1970–) is a particularly vile far-right US political pundit. And to merit the qualification "particularly vile" in the august company of Rush Limbaugh and Michael Savage is truly awe-inspiring.

She stands out for openly defending Japanese American internment during World War II, and implied that Muslim civilians should be similarly locked up for the duration of the War on Terror (so basically until the Republican Party unanimously decides that Muslims are okay). She's also a proponent of torture, and demonizes her opponents at almost every opportunity, often for no particular reason.

Being a woman, she's usually the go-to alternative to Ann Coulter. Being the daughter of Asian parents, (i.e., not white), she's often used to shield American conservative punditry from accusations of racism (regardless of the ironic fact that Malkin's a flaming racist herself).

Not surprisingly, Malkin is a regular contributor on Fox News. She was a guest host on The O'Reilly Factor.

Her rhetoric is so bad that Andrew Sullivan made up the Malkin Award for the most intemperate, hateful remarks of the year. (Both she and Coulter are ineligible for the award, to give others a chance at winning[1]).

Malkin has a history of bizarre, unhinged and outright anti-social behavior. A full list would run to book length. Here are some of the more notorious incidents, in chronological order:

Malkin's rise started during the run-up to the 2004 Presidential Election. At the time, she still had a habit of saying obscene things, but she couched them in such a way that she had plausible deniability. The first challenge to this tactic came from professional screamer Chris Matthews. On Hardball, Malkin raised allegations that John Kerry had deliberately wounded himself to earn a purple heart. However, she couldn't quite bring herself to say that she believed that, only that allegations were being made (well, allegations from Malkin, at least). The results were a bit embarrassing for Malkin, to say the least.[2]

In 2004, Malkin released a book defending Japanese internment during World War II (something that was ordered by Franklin D. Roosevelt). Apparently, she didn't like the fact that Japanese internment was brought up by those opposing racial profiling of terr'ists Muslims, so she decided to write a negationist history of Japanese internment. In fact, it was not racist. Nothing to do with racism, nothing at all.[3][note 1] The book is especially ironic considering that the leading conservative Republican during World War II was opposed to Japanese American Internment.

Malkin and the Sinister Crescent![edit]

In 2005, Malkin took a pre-eminent role in an astoundingly dumb controversy regarding a proposed memorial for Flight 93. Dubbed "Crescent of Embrace," it consisted primarily of a stand of trees partially surrounding the crash site. The design was selected by a panel composed of design experts and victims' family members, and it was announced on September 7.[4]

Shortly after the announcement, a group of Internet obsessives—Malkin among them—came to the conclusion that the Memorial was actually a covert memorial to the terrorists.[5] Why? Because it's a big red crescent, a historic symbol of Islam![note 2] With such clear facts, all Malkin had to overcome were the families, all of whom were sure the claims were utter bunk.[6] Of course, Malkin is not one to let something as petty as the stated desires of the grieving get in her way.

The dreaded crescent was not a particularly long-term campaign, for Malkin or anyone else. Today, the only ones who want to talk about it are the mentally unstable sons of renowned political theorists.[note 3]

In 2006, Malkin "reported" on opposition to military recruitment in UC Santa Cruz, specifically the actions of a few students calling themselves Students Against War. She included a copy of a press release which contained contact information for the three leaders. Subsequently, the three of them started receiving threatening phone calls and e-mails. In a rare act of "civility," Malkin took the contact information down.

The students were understandably upset. When Malkin heard of their complaints, she blamed them, then reposted their contact info. Subsequent requests were ignored, and the information remains on her site to this day.[7][8]

In 2007, then-President Bush proposed cuts to SCHIP, an insurance program for lower-class families who are above the cutoff for Medicaid. The Democratic response included a statement by 12-year old Graeme Frost, a recipient of the program. The Frosts had been in a nasty car accident which left Graeme in a coma and his younger sister Gemma with brain damage. The costs for their treatment were covered by SCHIP. As Graeme said in the response: "If it weren't for SCHIP, I might not be here today … We got the help we needed because we had health insurance for us through the SCHIP program. But there are millions of kids out there who don’t have SCHIP, and they wouldn’t get the care that my sister and I did if they got hurt … I just hope the President will listen to my story and help other kids to be as lucky as me."[9]

Enter Michelle Malkin. Spurred by the mad gibbering of the Freepers, Malkin launched a full-on harassment campaign "investigation" against the Frosts. She traveled to the Frosts' neighborhood, hoping to find evidence that they were all con artists. When grilling the neighbors failed to turn up any dirt, she tried snooping in their windows.[note 4] She made hay out of the fact that she thought she saw granite countertops, an accusation which has been dumped down the memory hole but lives on as a meme to this day.[10] Probably what would be the most laughable part of the whole incident, if it weren't such a twisted, dangerous display of lunacy, is that she actually had the audacity to claim that the Democrats had engaged in "child abuse" by putting Graeme in a place where Malkin could savage him.

Lest you still have doubts about Malkin's utter classlessness, she followed this up with an attack on an even younger SCHIP recipient.[11]

...and no, we're not over yet. In 2010, Malkin decided to reprise her role as the huntress of children:

Malkin's Crusade against a Sinister Scarf![edit]

In 2008, Malkin looked at an ad Rachael Ray did for Dunkin' Donuts and decided that the black-and-white paisley scarf she was wearing was a sly sign of support for the Palestinian Liberation Organization.[13]

It is scientifically impossible to make that sound more ridiculous than it really is. Trust us, we tried.

Malkin is a vocal defender of Daniel Holtzclaw

(convicted in 2015 of raping multiple African-American women)[14] and considers him a friend.[15] Despite victim testimony and limited DNA evidence being presented at the trial,[16] Malkin still appears to genuinely believe that Holtzclaw was the victim of anti-police railroading.[17]

In 2019, in an apparent attempt to insinuate massive fraud in Oklahoma, Malkin found another convicted rapist to defend. Her motive in doing this was quite transparently to discredit the process through which Holtzclaw was convicted, as the suspect in question (Rayshun Mullins) had confessed. Twice.[18]

Malkin has been one of the foremost proponents of ACORN conspiracy theories, or "Obamacorn" as she often calls it. She has written numerous columns accusing ACORN of everything from massive voter fraud to being a major player in causing the banking crisis so it could embezzle stimulus money. Compared to everything else she's done, Malkin is probably one of the few people who can make ACORN conspiracies sound sane in comparison.[19]

Michelle follows the typical nationalist views on immigration: lock 'em up or kick 'em out. She is associated with the nativist website VDARE, who must be thrilled to have an actual minority on hand. She has a particular obsession with "anchor babies", children born to immigrants in the United States. She is adamant that the laws that allow foreign parents of American-born children to gain citizenship should be changed immediately.[20][note 5] Ironically enough, Malkin's own parents were immigrants, on worker visas, from the Philippines. In other words, Michelle Malkin is an anchor baby, by her own definition.[21][22] Uncle tommery of the highest order.

Do you really think Malkin believes in science the lies of the enviro-nitwits and Al Gore? Don't bet on it.[23]

In a column following the US Supreme Court decision in Grutter v. Bollinger, Malkin complained about seeing "militant Asian activists joining other liberal minority students across the country in a Sumatran gibbon-like celebration ritual of chest-beating, fist-pumping and pro-affirmative action whooping calls" in the news.[24] Yep, "gibbon-like....chest-beating" is totally not bigoted.[25]

Drugs are bad, but crazy is good, m'kay[edit]

Interestingly, the only thing that will dissuade Malkin from associating with politicians that match identically with her views is whether or not they engage in crack use.[26]

In 2012, Malkin founded Twitchy, an aggregation website for Twitter posts relating to current news about politics and entertainment.[27] Ultimately, the site is mostly nutpicking of Twitter posts intending to make liberals look stupid, rather than making serious arguments. The content is catnip for the audience, as the comments section is full of the predictable, juvenile insults like "libtard" as well as tired PRATT memes. Many "headlines" on Twitchy are coincidentally posts of her own tweets, written as a third-person is covering them e.g. "Try ‘systemic assassinations’: Michelle Malkin fixes Obama’s statement after the Chattanooga attack"[28]and "‘Tone’ problem?' Michelle Malkin let Planned Parenthood’s Cecile Richards HAVE IT with gruesome truth"[29] written by "Twitchy Staff" of which she happens to be a member, apparently using her site as the most obvious sockpuppet imaginable.[30]

In a stopped clock moment, Malkin is opposed to the death penalty;[32] although she was once in favour of it, Malkin changed her opinion after seeing the numerous cases of prosecutorial misconduct leading to wrongful convictions in the USA.[33][34]