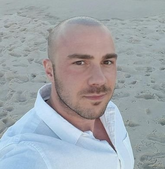 Post-2016, Gage a former neo-nazi has claimed he is no longer a white nationalist and abandoned his old views. However, the website Right-Wing Watch in 2019 in an article on Gage, has pointed out: "it doesn’t appear his worldview has changed much–if at all. Gage is still online cranking out anti-Semitic content and associating with white nationalists."[1] On his current YouTube channel Reality Engaged, Gage has hosted interviews and discussions with anti-Semites and far-right activists, including Kevin MacDonald and Tomislav Sunić

As of 2020, Gage advertises himself as an anti-war, anti-supremacist and pro-free speech activist.[4] However, Gage is known to post homophobic comments on Twitter and his belief that certain people should be executed. He continues to appear on alt-right podcasts such as Red Ice TV with neo-nazi Henrik Palmgren and retweets alt-right content from Paul Ramsey.[5][6] The SPLC has noted that "Gage has a long history of racism and anti-Semitism."[7]

Gage was formerly a chairman for the National Youth Front (NYF), the youth wing of the neo-Nazi American Freedom Party (a.k.a. American Third Position), whose director is Kevin MacDonald. The party calls for halting "non-white immigration" into the US and claims to stand up for the "customs and heritage of the European American people". Gage resigned after the group faced various fundraising issues and a name change after a threatened lawsuit.[8] Gage once appeared on radio with white supremacist, David Duke. According to Right-Wing Watch:

Throughout his years in the hate movement, Gage served as the chairman of the white nationalist group National Youth Front. He reportedly resigned as chairman before his first child was born and handed control of the organization to Identity Evropa founder Nathan Damigo.

After leaving the American Freedom Party, Gage started creating his own racist videos on YouTube, spreading the "anti-racist is a code word for anti-white" and "diversity is white genocide" mantras as well making videos such as "make whites great again", denying the Holocaust, and criticising what he calls "international-jewry". In 2015, Red Ice Creations who interviewed Gage stated:

Angelo John Gage is a political activist who is fighting against Marxism in all its abominable forms. A former US Marine, Gage went on to graduate from the International Center for Positive Change and Hypnosis as a NLP (Neuro-Linguistic Programming) Master Practitioner and Conversational Hypnotist. He also chairs the National Youth Front (NYF), an anti-supremacist conservation organization dedicated to the preservation of all White people, including their nations and cultures across the globe.[9] 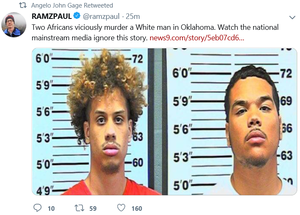 Gage continues to retweet alt-right content from Paul Ramsey in May, 2020

In April 2016, Gage deleted his YouTube content and said his white nationalist strategy had been a total failure:

White Nationalism is a failing strategy because of this (60 years proves this) and we need something MORE effective, which I think would be Ethno-Nationalism […] Let these losers talk in circles; that’s all they have been doing for 60 years and that’s all they’ll continue to do. The time has come for REAL people to get serious; standing behind a real populist message where activists won’t be afraid of losing their jobs; one that won’t keep them stuck on a computer talking to – who I now call ‘avatards’ – and other hobbyists that have no strategies at all. We need a REAL strategy that can actually be APPLIED TO THE REAL WORLD. Donald Trump has shown us all just how effective an all-compassing populist message can be, but these internet LARPers rather hide behind avatars pushing their losing message than ever do anything in the real world.[10]

In 2018, Gage and Kevin MacDonald were featured on the alt-right podcast Red Ice TV.[5] In 2019, Gage started a new YouTube channel titled, Reality Engaged.[11] Despite claiming to change his mind on racism, Gage continues to associate with white nationalists and other far-right activists on this Youtube channel and supports their views. He also posts the same "white genocide" mantra (just re-worded as "diversity kills"), anti-Semitism and retweets alt-righters on his Twitter profile — so the leopard hasn't changed his spots. In February, 2020 Gage posted a YouTube video "My Beef with Israel Explained".[12]

In May 2020, Gage said he was receiving online threats from anti-fascist activists. He posted:

If you threaten me or my family, then claim you're going to come get me, I will let you know that I'll kill you. If this is violation of ToS, then Twitter actually supports terrorism and is against self defense.[13]

Gage who is still deeply involved with figures from the alt-right claims to be neither left or right ring.[14]

Gage is known to attack LGBT people on his Twitter. He argues against same-sex marriage claiming it is not natural. He has also claimed that homosexuality is a "sexual perversion" and is a danger to children.[15]

Despite claiming to be an anti-war activist, Gage often posts on his Twitter that certain people should be executed. Gage wrote the following in 2020: