The only "miracle" is that more people haven't died from this yet.

Miracle Mineral Supplement, often referred to as Miracle Mineral Solution or MMS, is bleach the name given by its promoter, former Scientologist[1] and sometime Colonel Sanders lookalike Jim Humble (c. 1933–),[2] to an aqueous solution of 28% sodium chlorite (NaClO2), a toxic industrial chemical[3][4][5][6][7] known to cause fatal renal failure,[8] in distilled water, prepared in a citric acid solution resulting in the formation of chlorine dioxide (ClO2), a potent oxidising agent used in water treatment and in bleaching.[9] The name was first coined by author, Jim Humble, in his 2006 self-published book, The Miracle Mineral Solution of the 21st Century.[10]

COVID-19, acne, cancer and much more (though apparently not gullibility). All evidence in support of this comes from Jim Humble's book and from anecdotes promoted by the ironically-named Humble who claims to be a billion-year-old God from the Andromeda Galaxy.[11][12] MMS is often described as a water purifier (especially on eBay where sales of quack remedies are notionally banned) so as to circumvent regulations prohibiting the sale of unregulated medicines.[13] In January 2010, The Sydney Morning Herald reported that one vendor admitted that they do not repeat any of Jim Humble's claims in writing in order to circumvent regulations against using it as a medicine.[14]

In claiming to cure a broad spectrum of disparate and unrelated conditions, all without the basis of credible evidence, it fails the "Barrett Test" as proposed by Stephen Barrett who advises to "be skeptical of any product claimed to be effective against a wide range of unrelated diseases — particularly diseases that are serious. There is no such thing as a panacea or 'cure-all'."[17]

(1994–) rose to prominence with his tale of taking on promoters of MMS in a forum for support of Crohn's sufferers (Morgan has Crohn's). He was hounded off the site and banned for criticising MMS.[18] At least one importer has been convicted in the UK.

In recent years, MMS has been promoted as a "cure" for autistic children.[19][20] In addition to the obvious dangers of subjecting a developing child's gastrointestinal system to industrial bleaching agents,[21] forcing MMS on a non-consenting child almost certainly qualifies as child abuse and could potentially lead to legal repercussions for the caregiver, including loss of custody of the child. MMS has also been promoted to the anti-vaccination movement (antivax) at summit known as Autism One.[22] 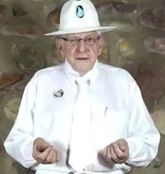 When taken as directed by Humble, the likely effects include "severe nausea, vomiting and diarrhoea, dehydration and hypotension. If the solution is diluted less than instructed, it could cause damage to the gut and red blood cells, potentially resulting in respiratory failure."[23][24]

Chronic exposure to small doses of chlorine dioxide could cause reproductive and neurodevelopmental damage, according to the United States Environmental Protection Agency.[25]

In animal studies, chlorine dioxide has been shown to impair thyroid function and reduce T4 cell count in monkeys after 6 months.[26] Another study in rats resulted in reduced red blood cells count when exposed to 100 mg/L of chlorine dioxide concentration in their drinking water, after 3 months.[27]

The United States Department of Labor restricts occupational exposure through inhalation of chlorine dioxide to 0.1ppm since concentrations at 10ppm resulted in deaths in rats after 10 days, while a case where a worker was accidentally exposed to 19ppm resulted in death.[28] According to the same organisation "chlorine dioxide is a severe respiratory and eye irritant in humans."[28]

Between 2009 and 2019, the FDA has directly linked seven deaths to people who have ingested MMS.[29]

One man reported that his wife died after trying MMS a single time while traveling abroad. She had been dancing happily the day before, took MMS under the impression it would protect her from malaria, and died in her husband's arms hours later.[30]

Worst of all, people who don't believe in modern medicine may fail to get help during a life-threatening emergency. "The majority of people that use this product are not going to be calling the poison center," warns toxicologist Dr. Kelly Johnson-Arbor.[31] Thus, it's hard to say just how many serious poisonings have occurred.

In December 2009 an alert was issued by the Belgian Poison Control Centre to the European Association of Poisons Centres and Clinical Toxicologists. In response to this, an evaluation was performed by the French "Comité de coordination de toxicovigilance" in March 2010, warning about a dose-dependent irritation and possible toxic effects. They also warned that patients affected by serious diseases could be tempted to stop their treatments in favour of this alternative treatment.[33]

A similar notice was released in July 2010 by the US Food and Drug Administration warning that the instructions for preparing the solution by mixing it with an acidic solution (e.g. orange juice) would produce chlorine dioxide, "a potent bleach used for stripping textiles and industrial water treatment." Because of reports including nausea, vomiting, and dangerously low blood pressure as a result of dehydration following instructed use, the FDA has advised consumers to dispose of the product immediately.[9]

In the UK, the Food Standards Agency also released a warning, following the warnings from Health Canada and the US FDA, in it they stated that "MMS is a 28% sodium chlorite solution which is equivalent to industrial-strength bleach.[34]

Following media attention towards MMS seminars in Ireland and New Zealand, politicians in both countries have taken up bills aiming to ban any sale of the compound.[37][38] Irish parents who have used MMS on their children are facing criminal investigations.[39]

Similar media attention towards Kerri Rivera, the main promoter of MMS as an autism cure, prompted the Illinois attorney general to send agents to Rivera's presentation at the 2015 Autism One conference and serve her with a subpoena. Unable to present proof of MMS' benefits, Rivera was forced to sign an agreement barring her from further promoting MMS or appearing at conferences in the state of Illinois.[40] Rivera has since announced that she will no longer do MMS consultations for autistic kids, but her following of anti-vaccine parents remains active on social media.

Jim Humble's church was forced to move an MMS seminar in East Sussex, England to an undisclosed location after two venues refused to host the event. The meeting was infiltrated by reporters and undercover footage they collected led to accusations that speakers violated Britain's 1939 Cancer Act.[41] Another seminar in Surrey was raided by police and Trading Standards agents.[42]

On 27 May 2015, a federal jury in the Eastern District of Washington returned a guilty verdict against Louis Daniel Smith for selling industrial bleach as a miracle cure for numerous diseases and illnesses, including cancer, AIDS, malaria, hepatitis, lyme disease, asthma and the common cold.[43] On 27 October, Smith was sentenced to 51 months in prison.

"…the jury convicted Smith of one count of conspiracy to commit multiple crimes, three counts of introducing misbranded drugs into interstate commerce with intent to defraud or mislead and one count of fraudulently smuggling merchandise into the United States."[44] "Before trial, three of Smith's alleged co-conspirators, Chris Olson, Tammy Olson and Karis DeLong, Smith's wife, pleaded guilty to introducing misbranded drugs into interstate commerce."[44]

On 9 May 2016, Harris County Attorney Vince Ryan filed an injunction against Shane Hawkins of Angleton, Texas for promoting MMS at Houston-area hotels on behalf of the Genesis II Church. Ryan aimed to stop Hawkins from hosting further seminars, and kept open the possibility that Hawkins will be criminally charged.[45] During the 2019-20 COVID-19 outbreak, the FDA issued a warning to this same "church", as they were touting this holy sacrament of the Genesis II church! poison as a cure for the coronavirus.[46]

The FDA issued a similar injunction to stop selling bleach as a treatment for COVID-19 to a branch of Genesis II located in Bradenton, Florida on April 17, 2019.[47] The "church" ignored the warnings, so the church was raided on July 8, 2020. Four individuals (Mark Grenon, Jonathan Grenon, Jordan Grenon and Joseph Grenon) were charged with conspiracy to defraud the United States, conspiracy to violate the Federal Food, Drug and Cosmetic Act and criminal contempt.[48]

In 2020, the FDA issued a new injunction ordering Genesis II to stop all sales of MMS.[49]

The sale of MMS is banned in Canada.[50]

On May 2, 2020, Emma Dalmayne excitedly announced via Twitter that MMS had been banned in the United States. Dalmayne tweeted an image of text from court papers.[51]

In a frightening turn of events, the Bolivian senate approved the use of MMS as a treatment for COVID-19, despite no evidence of efficacy and tons of evidence of life-threatening risks.[52]

The US government and the FDA have been criticized for failing to take strong decisive against MMS until the COVID-19 pandemic. Some people believe that it has failed to enforce laws strongly enough to protect people from poisoning.[54]

Autistic activists have worked hard for years to get MMS banned.

Autistic mother Emma Dalmayne has campaigned against MMS for years.[55][56][57] Her petition to ban fake autism "cures" (including MMS) has gathered over 60,000 signatures.[58]

Fiona O'Leary, also an autistic mother, went undercover to join an MMS Facebook group online and gather evidence.[59][60] These groups include photos of severely ill "detoxing" children and advice on hiding the truth from social services.[61] She shared evidence in court[62] and worked to help Ireland ban MMS. O'Leary has posted screenshots of happenings in the group on her blog, and it's truly horrifying.[63]

MMS has become particularly popular amongst various far-right activists and conspiracy theorists, including Alan Keyes (who promotes it on his show)[64] and several top supporters of the QAnon movement. Among QAnon supporters it is commonly touted as a supposed prevention and cure for the 2019-20 COVID-19 outbreak, which according to one of the pundits was created as part of a depopulation scheme backed by Bill and Melinda Gates. Take MMS to combat a depopulation scheme? The irony abounds…[65]

Genesis II Church of Health and Healing: The chemical church[edit]

Probably in response to the growing regulatory crackdown on MMS, by 2018 Jim Humble formed a "church" known as "Genesis II Church of Health and Healing".[66] Genesis II's two main functions are promoting MMS quackery and supporting the antivax movement.

Genesis II claims that MMS and other substances are its sacraments:[67][68]


This is perhaps the first and only church to include a Quack Miranda Warning.[77][78]

With membership, Genesis II offers a "letter of religious exemption from vaccinations and/or mandatory medications" and a membership card that states that "All members are exempt from any means not chosen, including but not limited to: vaccinations, medications, X-rays, scans, implants, mandatory voting, and health insurance mandated by a human government or authority."[79][80] The text of this statement is alarmist because US governments have been loathe to actually arrest, subdue and vaccinate people — rather that has been compulsion (a fine in the precedent-setting case[81], and typically denial of public school entrance for unvaccinated children in modern times). The letter attempts to claim a religious exemption, primarily by citing 2 Corinthians 3:16-17,[79][note 1] but hypocritically the website states elsewhere that the "church" is non-religious:[82]

The letter includes a list of chemicals that are (sometimes) contained in vaccines and their alleged dangers:[79]


Vaccines have repeatedly been shown to be safe and effective, and the risks have been show to be far-outweighed by the benefits, both individually and for the population as a whole.[105] Genesis II is thus engaging in a curious form of simultaneous irrational chemophobia (with regard to vaccines) and irrational chemophilia (with regard to MMS). Like homeopathy, Humble is blissfully unaware of the concept of "the dose makes the poison" that is central to evidence-based medicine, but unlike homeopathy, Humble is promoting dangerous doses of chemicals in MMS while promoting chemophobia over safe doses of chemicals in vaccines.

Alternative medicine relies strongly on the appeal to nature fallacy, and so Genesis II is unusual among alt-med proponents in that it simultaneously promotes ingestion of known dangerous chemicals, some of which are synthetic (sodium chlorite, chlorine dioxide, and calcium hypochlorite), while claiming chemophobia for vaccine adjuvants, some of which are natural (squalene, formaldehyde, aluminum hydroxide, aluminum phosphate, phenols, MSG) and all of which are safe).