From RationalWiki
(Redirected from Londonistan)
Jump to: navigation, search 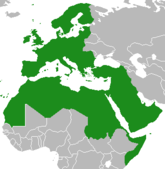 Eurabia. Apparently Iceland, Belarus, Ukraine, Moldova, and the European part of Russia aren't in it.
"Eurabia" is an Islamophobic conspiracy theory and a doomsday scenario in which Europe will be Islamized in the near future (like another Semitic culture wasn't, and often still is, blamed for the same thing). The doomsday scenario involves Muslims (whom the kind of people who promote this theory conflate with Arabs) forming the majority of Europe's population by the end of the 21st century, due to immigration and to higher birth-rates. They will then seize control and Islamise the continent. The conspiracy theory suggests that this is being deliberately planned by European elites, and especially by the European Union. The Eurabia theory combines Islamophobia and Euroscepticism.

The Eurabia theory is a politically significant conspiracy theory in Europe. It has been adopted by populist politicians such as Geert Wilders, and was also the main ideological inspiration for far right terrorist Anders Behring Breivik, who killed 77 people in Norway in 2011. His manifesto 2083 contains repeated references to Eurabia, and his attacks aimed to contribute to its defeat.

Unlike most conspiracy theories, Eurabia can be traced to a single source and a single author. The "self-taught Jewish intellectual" Gisèle Littman published the book Eurabia: The Euro-Arab Axis in 2005, under the name Bat Ye'or.[1] She was born in Egypt: her family fled the country after the Nasser revolution, and her research was mainly on the treatment of Jews in the Middle East. She married David Littman, an activist who campaigned against antisemitism in Muslim-majority countries.

The original version of Eurabia claimed that the European Economic Community, the forerunner of the EU, made a deal with Arab powers in the mid-1970's. In exchange for oil, it would turn against Israel and accept immigrants from Muslim countries (North Africa and the Middle East). The current version is broader. It claims that there is a Europe-wide mass immigration policy to "transform" the continent, and that it will create a Muslim majority in cities from around 2020, and in the rest of the continent later, perhaps after 2050. The Eurabia theory claims that multiculturalism is part of this strategy, and that political elites are appeasing militant Islam and conceding Muslim demands to impose their culture.

Many authors have contributed to the current version, which was promoted through books, articles, and especially in the blogosphere. Book authors include Bruce Bawer, Theodore Dalrymple, Oriana Fallaci and Serge Trifkovic. Melanie Phillips promoted a UK variant, about London being transformed into "Londonistan." In the US, the Eurabia theory was promoted by the Gates of Vienna blog (Ned May), conspiracist blogger Pamela Geller, Canadian-American pundit Mark Steyn, Robert Spencer, Daniel Pipes and general purpose loonies Frank Gaffney and Netherlands's Arthur van Amerongen.

The most comprehensive source for the current version is the Norwegian blogger Fjordman (Peder Are Nøstvold Jensen), who is quoted extensively in Breivik's manifesto. This is how Fjordman summarises the Eurabia scenario for the future of Europe:

The EU continues its transformation into a continent-wide organization with clear totalitarian leanings, and a very pro-Islamic stance. Europe’s fate is sealed when Turkey is allowed into the Union, and becomes its largest member. Historian Bat Ye’or, who first coined the term “Eurabia”, thinks that Europe’s ties with the Arab-Islamic world are now so firmly entrenched and established that Eurabia is an irreversible fact. Europe will cease to be a Western, democratic continent, and will become an appendix to the Arab world. Eurabia will become a global center for Jihad activities, as the dhimmi taxpayers and infidel Western technology give a boost to the Ummah. Muslims will be heavily concentrated in the major cities, and the dhimmi native population will retreat into the countryside. The old nation states will thus slowly die, as their major cities, which constitute the brain and “head” of its culture, are cut off from the rest of the body. Europe’s decline into Eurabia will be sped up by the fact that millions of educated natives with the means to it will move to the USA or other nations. There will be no major war in Western Europe, as its civilization is already dead and very few will bother fighting for it.

The scenario is that European elites decided in the 1970's to Islamize Europe, and for that purpose started a program of mass immigration of Muslims. The immigrants are not coming for economic reasons, but to colonize Europe, Islamize it, and destroy its Christian heritage and values. The Muslim immigrants are taking over the cities of Europe, district by district. They establish no-go areas, and introduce Sharia law. The authorities conceal the true number of Muslims, but they will soon be a majority in most cities. The Muslims continuously impose their own culture, and the political elites appease them. Muslim families are all very large, so their share of the total population is growing. Ultimately they will form a majority, and they will reduce non-Muslims to the status of dhimmi (serf). Europe will then be a Muslim continent, perhaps part of a global caliphate, where all Sunnis and Shiites would get along!

Unsurprisingly, proponents of the Eurabia hysteria rarely provide evidence. Claims about the demographic transformation of Europe rest on assumptions of extremely high birthrates among Muslim immigrants, which are supposed to continue indefinitely. However, general tendency is for immigrant populations to reduce their birth rates over time to approximate the birth rates of their new home countries.[2] Serious demographic projections don't suggest anywhere near a Muslim majority: the Pew Research Center estimates that the Muslim share of Europe's population will rise "from 6% of the region’s inhabitants in 2010 to 8% in 2030."[3] The only documentary evidence cited for Eurabia is the 1975 "Strasbourg Resolution" — a non-binding declaration on Euro-Arab co-operation. The document has a mythical status among Eurabia proponents, but its text does not substantiate any conspiracy theory.[note 1] Coincidentally, Eurabia conspiracy theorists just happen to ignore the major European-Israeli free trade deal made that same year.[4]

The theory gives no plausible reason European elites and an — ostensibly notoriously secular — EU would want to Islamize the entire continent. A few Eurabia proponents suggest that they are cultural Marxists, whose real goal is to destroy Western civilization, and that Islam is simply their instrument (even though this would mean them too). Aha.