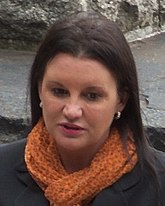 Jacqui Lambie (1971–) is an Australian butt-of-all-jokes politician, right-wing activist and all-round general wingnut who was elected as a Palmer United Party senator for Tasmania at the 2013 Australian Federal Election. She is known for her extreme views regarding Islam and Muslims, gays and immigration, and will often use these issues (namely, Muslims and immigration) to appeal to peoples fears, for publicity and to score cheap political points. She resigned from the Palmer United Party and now sits as an independent senator.

Normally, someone like Lambie wouldn't be taken seriously in Australian politics - she, however, holds significant sway in the Australian Senate, so there really isn't much choice in the matter but to take her extreme views seriously. She is arguably the Australian equivalent of Sarah Palin in that she both lacks any sort of sense or intelligence in what she says, and relies on her appearance to score support. Most jokes you can find about her refer to her early years as being a backward hick on the mainstage. Post-2015 Lambie seems to have learnt to keep her mouth shut, and can even seem reasonable at the few times she's commented to the press.

Lambie has a deep hatred of the Australian Greens, once suggesting that they should be subjected to a Senate inquiry over the high unemployment rate in Tasmania, saying that "destroyed all hope".

She also compared the Greens to Islamic State as some sort of a joke.

This is where Lambie firmly enters the realm of complete delusion. She firmly believes that China could invade Australia, stating that "if anybody thinks that we should have a national security and defence policy, which ignores the threat of a Chinese Communist invasion – you're delusional and got rocks in your head ... The Communist Chinese military capacity and level of threat to the western world democracies is at an unprecedented and historical high."[1]

She also believes that Indonesia is a military threat to Australia.

Lambie announced plans, appeasing wingnuts, Islamophobes and crackpots the world over, to introduce a bill into the Australian Senate to ban the burqa in Australia. These plans were shot down by constitutional expert Professor George Williams, who described the law as "unworkable, it would frankly be a bit silly"[2]

She also attacked supporters of Islamic Sharia law (read, those who aren't against Islam and Muslims), describing them as "maniacs and depraved humans" who will not stop committing "cold-blooded butchery and rapes until every woman in Australia wears a burka". When asked to explain what Sharia law is in an interview, she was unable to saying that it "obviously involves terrorism". Some commentators described this interview as a trainwreck.[3]

Not surprisingly, like most extremist wingnuts, she is against gay marriage.

In a surprising twist, Jacqui Lambie has a strong dislike for Australian Prime Minister Tony Abbott, referring to him as a "bare-faced, uncaring liar".[4]

In an even more surprising twist, she has taken a strong liking to Vladimir Putin, saying: "I think he has very strong leadership. He has great values...He's certainly doing his bit to stamp out terrorism and I guess you've got to pay the man for that."[5]

Lambie supports bringing back the death penalty for those found guilty of treason.