Herein goeth anything regarding the technicalities of the wiki

If your IP is blocked from editing as an open proxy

What extension does Wikipedia use to get the subsection links next to each subsection title? Cømяade FυzzчCαтPøтαтø (talk/stalk) 13:39, 24 July 2017 (UTC)

I think Fuzzy means the "§" link that appears next to the headings, that links to the anchor for that heading. (once again, memorising the ASCII code for section signs comes in handy!) —Kazitor, pending 08:28, 16 November 2017 (UTC)

See the main article on this topic: Goat § What to do with a Goat and a stool 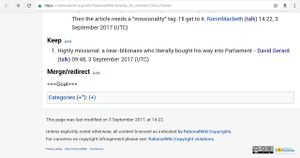 And as these edits should make clear, this only occurs on certain pages. It could also be a template -- maybe something didn't close a div or a span and it's fucking with the subsections. oʇɐʇoԀʇɐϽʎzznℲ (talk/stalk) 17:07, 4 September 2017 (UTC)

This is not a result of the recent upgrade. This has been an issue for years.—CheeseburgerPlate

All of the internal links to backups on RationalWiki:Content dumps fail. Also, what is the status of @David Gerard's archive.org port? Bongolian (talk) 02:15, 29 August 2018 (UTC)

@David Gerard reminder to do this -- might be convenient to do on same day you take elections live 32℉uzzy; 0℃atPotato (talk/stalk)

Other things to do at the same time:

I'm all for modernizing our infrastructure, as long as what we already have do not break. I really like the "Thanks" template. I first saw it on Wikipedia a couple years ago (when someone thanked me) and have used it occasionally ever since. The "Timeless Skin" looks like something the gods would approve. The Multimedia Viewer is something I almost always forget we don't have because it is so intuitive.

Sorry if this is implied, but most of it is too technical for me. Will this upgrade include the visual edit gadget? I have been using it on Wikipedia for a quite some time now, and I love it! Finding the appropriate templates, citing sources, editing equations, changing photographs or illustrations. Amazing!

While we are at it, does this proposed upgrade include the template that automatically converts units for you? It looks like this on Wikipedia. If you typed {{convert|1|mi|km}}, the output would be 1 mile (1.6 km). I find this template very convenient. Nerd (talk) 18:42, 7 February 2019 (UTC)

The list I presented doesn't include Visual Editor. Although to be clear the main reason I left the Visual Editor thing out, is because it requires a very complicated additional setup so may be better suited as another task. However, the convert template would be made possible with Scribunto which I have listed up there, so that is included. — Dysk (contribs) 22:26, 7 February 2019 (UTC)

@Dysklyver I see. The visual editor can be a little resource-intensive. Thanks! When will this upgrade be implemented? Nerd (talk) 03:01, 8 February 2019 (UTC)

We need to finalize a set of things we want, get general agreement for it, and ideally test it all works on a test wiki, before then asking for it to be deployed, bearing in mind that Tmtoulouse/David Gerard are the operations people. The main thing is not to break the wiki, and the other thing is not to add things that will be there by default that everyone hates. — Dysk (contribs) 16:37, 8 February 2019 (UTC)

@Dysklyver Last time I check Trent Toulouse was a university professor. (David Gerard appears to be a programmer and book author.) This means we can potentially get this done before summer is out. Nerd (talk) 22:47, 26 February 2019 (UTC)

A combination of laziness and procrastination. Somebody needs to figure out if certain existing extensions would work nicely with the proposed new software. — Dysk (contribs) 23:31, 15 May 2019 (UTC)

The visual editor is amazing for doing proper citations, which is a big problem on RW from what I can see (too many bare URLS). However I understand it is a large task. Debunky (talk) 02:03, 30 March 2020 (UTC)

I did the last MW upgrade, and I expect I'll do the next one too, some time in the near future. MW 1.27 is EOL so it needs to be done so that we can continue to receive security upgrades. I'd be comfortable installing the WMF-deployed extensions Dysklyver proposed above, specifically CategoryTree, CodeEditor, MultimediaViewer, OATHAuth, Scribunto, MobileFrontend, TemplateStyles, Thanks and the skin Timeless. I think VisualEditor is a reasonable stretch goal, if you want that.

Instead of WikiSEO, which is unmaintained and not in Gerrit, I would suggest OpenGraphMeta, which is in Gerrit and is written by a well-known author, or PageImages, which is simple but WMF-deployed.

The servers also need to be upgraded to Ubuntu 18.04. I'm thinking about the order of operations. Traditionally you do the OS upgrade first, so that you're more likely to have the dependencies needed by the new MW version. Linode's volume feature is now out of beta and available in Newark, which opens up some new possibilities for the kind and number of instances.

If anyone wants to help, the number one thing that needs to be done is to test the RationalWiki-specific extensions against MW 1.31 and to update them as needed. They are all in RationalWiki's GitHub, but nobody has ever submitted a pull request against them despite their comically bad state. Note that I moved Wigo3 to Gerrit, so the GitHub version is outdated and non-canonical. Wigo3 is the best of RationalWiki's extensions. -- Tim Starling (talk) 11:22, 7 July 2019 (UTC)

This is great. I won't specifically comment on the OS and how the load balancing works since I don't deal with that here, but as far as the extensions are concerned;
The rationale for WikiSEO was to generate descriptions for Google Search, and to get our articles to display previews on social media and chat applications, as a Wikipedia article would do if linked. Now it seems to me that OpenGraphMeta will generate previews for Facebook and presumably most social media sites, however it occurs to me that we could benefit from also installing Description2 from the same author to get the Google Search descriptions which are currently rather lacklustre.
I am not personally bothered about VisualEditor either way, since from a technical viewpoint it needs that additional Parsoid service I think it would be an optional thing to do if you think that isn't too hard to setup and maintain. I don't know how the mob would consider it, I believe it is still generally a good extension but older editors hate using it, heh. :)
Otherwise, all good. :) — Dysk (contribs) 12:49, 7 July 2019 (UTC)

Just think about how you want to spend my time, in priority order, and I'll think about how far down the list I want to go. What do you want more: VisualEditor or, say, analytics? Apparently Robert Lazar is the most popular article on this wiki. Is that something you want to know? Does that make you want to improve it? -- Tim Starling (talk) 13:52, 7 July 2019 (UTC)

Most important things on this list would be MobileFrontend and it's associated skin. And in my personal opinion analytics is better than the Visual Editor. The rest is good to have but also easy-ish to install so not a huge concern I suppose. — Dysk (contribs) 20:17, 7 July 2019 (UTC)

I think the main thing we can be said to need is something that works on mobile without looking like a web page for ants. I realise this is not a tiny thing of course - David Gerard (talk) 14:37, 8 July 2019 (UTC)

I'm going to second Dysklyver and David Gerard on prioritizing MobileFrontend. The main reason I created an account here (which I just now finally got around to doing) is to request a proper mobile view. I'm not picky. I just want *something*! (I don't particularly care either way about any of the other MediaWiki extensions under discussion.) ThisIsMyRealName (talk) 11:59, 2 November 2019 (UTC)

I disagree. People who edit using visual editor when knowing wikitext are monsters, but it does help bringing new good faith edits from new users. In my opinion, it is certainly something that should come. — The 𝗦𝗾𝗿𝘁-𝟭 talk stalk 03:37, 4 December 2020 (UTC)

Visual Editor comes with 1.35, whenever we get around to that - a proper PHP version it seems, functional, well-integrated and with seven years' development - David Gerard (talk) 20:23, 12 December 2020 (UTC)

The PHP version is a reimplementation of "Parsoid" in PHP. Parsoid is a wikitext parsing service that VisualEditor highly relies on. I wouldn't necessarily say it says much about the stability of VE. Techpriest (I am Alpharius! /

In general I would advocate hewing to Wikipedia's general look and feel as much as possible in terms of standard MediaWiki extensions. Most of the more controversial ones can be disabled in one's user preferences, and maintaining some degree of consistency makes it easier for Wikipedia editors to get up and running on RationalWiki. — ThisIsMyRealName (talk) 22:31, 4 June 2021 (UTC)

My suggestion, then, is... would it be possible to install a separate MediaWiki instance, located at, for example, beta.rationalwiki.org, that would run off the same backend database? That way, the primary frontend would remain the outdated version of MediaWiki that is known to (more or less) work properly, while intrepid users could choose to run the beta frontend, with a specific eye towards identifying any broken extensions.

You could probably also implement some sort of cookie-based redirect for users to be able to opt in to automatically using the beta frontend whenever they visit the site (e.g. from a DuckDuckGo search result), but I don't know what would be involved in doing that.

You would probably also want to set up some sort of "beta portal" explaining the purpose and scope of the beta frontend and including places where beta users can report bugs.

@Tim Starling you seem like the person who would be in a position to do something like this. Is there any specific way I could help move this process along? – ThisIsMyRealName (talk) 22:26, 4 June 2021 (UTC)

They appear to use the language of the person who did the binning, not the one of the viewer. See original example and tests. Don’t remember this coming up before, could be a new issue since @Tim Starling fixed it to work with the newer mediawiki (don’t know if we’re using the newer version or not). Christopher (talk) 14:00, 28 May 2021 (UTC)

Only be an issue with language shared by the blocking function (“autoblock disabled” etc) because vandal bin exclusive language (parole etc) isn’t ever translated. Christopher (talk) 14:09, 28 May 2021 (UTC)

In the MW 1.35 version, I've completely removed the options list from the log, so this is not a problem anymore. Per Christopher's request, I removed everything related to vandal binning IP addresses. -- Tim Starling (talk) 06:09, 1 June 2021 (UTC)

Haven’t checked but $wgVandalBrakeConfigRemoveRights surely governs what rights are removed when you’re binned, not what rights are removed when you’re blocked. Not letting binned people access the bin would be a bad idea. Christopher (talk) 23:20, 3 June 2021 (UTC)
(EC) Does this only apply to sysops who are blocked, or to all users who are blocked? If it's the latter than it should definitely be fixed; if it's the former than while less problematic, it would still be great to patch it (since many bugs occur when a sysop is blocked, e.g. not having their talkpage comments show up as patrolled). --Goatspeed. Stalk meCircularR

Can my account be renamed to arp242? It's what I use pretty much everywhere these days. I think MediaWiki should have some facility for this – or at least, I was able to rename my account on Wikipedia after filling in a form. Thanks! Carpetsmoker (talk) 17:56, 5 June 2021 (UTC)

Done.
We have a dedicated page for this: RationalWiki:Requests to change username. I don’t think it’s linked from anywhere prominent though. Christopher (talk) 18:00, 5 June 2021 (UTC)