From RationalWiki
(Redirected from The Dead Files)
Jump to: navigation, search

Ghost hunting TV shows are a reality-television genre inspired by "speculative" TV shows, like the classic In Search Of...

(1977-1982), by films like Ghostbusters (1984), and by cartoons such as Scooby Doo (1969-present). So far, no ghosts have been found, but they still keep hunting. The standard formula involves a bunch of ordinary people wearing baseball caps who profess to be "paranormal experts" stumbling around in the dark[note 1] while waving video cameras and other "scientific instrumentation" they got at Home Depot — but it can be any "reality" program that features a perfect storm of pseudoscience, superstition, and bullshit.

See the main article on this topic: Ghost Hunters

The Big Magilla and the one that started it all in 2004. While Most Haunted had been on the air in the UK since 2002, Ghost Hunters single handedly invented the male dominated, techno-bullshit US ghost hunting genre, and misled a whole generation of Americans into thinking that if they went into spooky places at night using some blinky but useless gadgets[note 2] to seek evidence that ghosts exist, they were somehow doing science.

Basically, all ghost hunting TV shows that followed are some twist on Ghost Hunters.

A "reality" television series on the Travel Channel, which desperately wants to cash in on the American public's strange obsession with ghosts, and the popularity of similar shows such as Ghost Hunters. Naturally, it promotes paranormal woo at every opportunity. Episodes generally feature the stars, Zak Bagans, Nick Groff, and Aaron Goodwin, entering a supposedly haunted area, and having "encounters" with "ghosts". The show premiered on October 17, 2008, and it has been profiting off the credulity of the American public ever since.

With the claims Ghost Adventures makes that the dead still walk the Earth, it came as no surprise when skeptics effortlessly eviscerated the validity of the show like piranhas.[1][2] The equipment used, basically the same stuff they use on other shows such as Ghost Hunters, is questionable at best. They also promote the electronic voice phenomenon.

Skeptics have also spotted questionable things, such as adding computer-generated shadows and claiming they were from a ghost.[3] Or perhaps the shadow was added by a computer savvy ghost.[note 3]

Not long after the show premiered, dozens of steamy Facebook pages dedicated to the show's hunky young frontman Zak Bagans sprang up bearing titles like "ZAK CAN INVESTIGATE MY HOT SPOT ANY TIME." Savvy producers quickly recognized the mostly female audience was hot for Bagans, and soon the show began including lots of close-ups of him with his shirt off. One fansite called ParanormalPopCulture.com that proclaims its purpose as "Exploring the Entertainment of The Unexplained" (the mind boggles) report Bagans living a sort of quasi-rockstar lifestyle, cruising Las Vegas parties with the lead singer from Mötley Crüe.[4] After Bagans claimed to have recorded the dead voice of suicide victim David Strickland, he thoughtfully featured the track on a new album with musical partners The Lords of Acid.[5] Exploit much?

When not engaged in the serious business of ghost hunting, each cast member markets his own T-shirt custom clothing line. Zac also shamelessly plugs his "Haunted Museum" on his show.[6][7]

Boo! Now give us your stuff.

Twist: "Ghost Hunters" who find haunted stuff, and then keep it.

A reality television series on the Syfy channel with a truly astounding premise. A conman named John Zaffis travels around stealing valuables from vulnerable people. How does he do it? He simply tells people their valuable antiques are haunted and need to be placed in his care so they will not give off any more evil vibrations. The astounding part is that (a) people let him do this, and (b) it is perfectly legal. At least for the moment.[8]

How the scam works (or) a typical episode[edit]

The producers identify people who think their home is being haunted. Zaffis sends in his team to investigate. After waving around some electronic gizmos they convince the residents that their place is officially haunted, is infested by demons, or is a portal to Hell. Zaffis arrives, points to some valuable item and claims that it is connected to some tragic historical event, and if he removes it from the house, the ghosts will go away. To seal the deal, he cites some "research" his team did at the local library which undoubtedly proves that something paranormal is afoot. For example, in one house Zaffis scored an engraved pocketwatch which dated from the late 18th century. CHA-CHING! How did he prove the watch had bad mojo? According to town records, the couple who lived there in those days got a… divorce. Oh yes, bad vibrations indeed! Much to Zaffis's disappointment, the scam doesn't always work; once, Zaffis had his eye on a valuable antique billiards set. Big money. But the owner wouldn't part with it, even after Zaffis told him the property once belonged to a… sanitarium (apparently, Zaffis believes that mental illness is caused by demons).[9]

Over the course of 18 episodes, Zaffis has walked away with piles of loot, including Civil War items, Victorian jewelry, antique firearms, and Native American artifacts. Zaffis would take the shirt off your back if he could arrange it (and if it were valuable). Thenewsjunkie.com sums it up quite nicely:[10]

"Not since John Edward’s Crossing Over has there been a show so ridiculous on television. If the "Haunted Collector" was any kind of decent man, he'd (at the very least) pay a fair price for these items and quit using fear to fill his coffers"

Zaffis is the nephew of Ed and Lorraine Warren, self-styled demonologists who glommed onto The Amityville Horror story and turned it into their own personal cash cow. Zaffis's bio includes the typical convincer used by ghost hunters, con artists and carnies to sucker the rubes. He claims he was a hardened skeptic up until he saw the ghost of his grandfather floating around his bedroom. His grandmother died a few days later, which everyone knows is proof positive that ghosts are real. Zaffis was a regular on the paranormal TV show circuit for at least a dozen years until he hit the scam-tastic jackpot with Haunted Collector.[11][12] Zaffis says he has over 1000 "haunted" objects taken from people's homes and stored in glass or plastic cases "so the energy can't get out." He maintains he can't burn, break, destroy or trash anything because it would "release the energy" and that would be "very bad."[13] 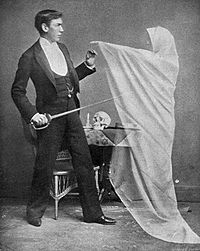 A paranormal "reality" TV series on the Travel Channel. The show stars psychic medium Amy Allan and former New York City Police Department homicide detective Steve DiSchiavi. Not a ghost hunting show in the traditional sense of gadgetry obsessed geeks in the dark, however it takes the "fake investigation" aspect to new heights of absurdity by combining obviously coached spooky anecdotes solicited by DiSchiavi with Allan's so-called psychic impressions of a location.[14]

Allan says she was tormented by shadow people at age four and has developed psychic powers in the meantime. DiSchiavi is a retired NYPD detective who worked odd jobs as a private investigator and security guard. Both have apparently stumbled upon a brand new source of income that involves ghosts, TV, and acting.[15]

The show's gimmick is a twist on hot reading, adapted to the pseudo-documentary format. Allan and DiSchiavi supposedly do separate investigations of locations reported to be haunted and only compare notes at the very end. Invariably, Allan claims to be in psychic contact with ghosts who tell her what happened at the location, and DiSchiavi's research backs it all up.

For example, Allan psychically channels an unhappy ghost named Getrude. DiSchiavi finds old records that show someone named Getrude lived in the house who was (gasp!) murdered on her honeymoon. It's a great convincer, especially if you believe a TV show couldn't possibly indulge in fakery.[16]

That white floaty thing is definitely dust a ghost.

This is yet another embarrassingly silly ghost hunting TV series from the geniuses that gave us Ghost Hunters and Haunted Collector.

A group of Louisiana ghost hunters are encouraged to act like caricatures of ignorant rednecks. In addition to seeking out spooks using pseudoscientific electronic gear with lots of blinky lights, they do endearing "Southern" things like eat grits, yell while waving a rebel flag, plunk out Lynyrd Skynyrd tunes on guitars in order to "engage the spirits", and utter cute sayings like "even the Sun shines on a dog's ass once in a while".[17][18]

One episode features one of the ghost hunters demonstrating what is charmingly described as "an old Southern remedy used to drive off evil spirits" involving sucking the breath from a frog and storing it in a glass vial.[19]

The cast appears to be carefully chosen for their scintillating personalities.[20]

There are probably worse things than making a fast buck off regional stereotypes, but when Variety describes a show as a ridiculous ploy to cash in on the current "redneck wave" of reality television, you know it's in deep trouble.[21] 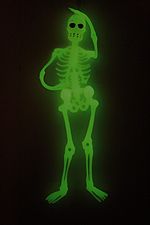 Not fake at all.

Twist: "Ghost Hunters" in a cave.

Supposedly the Old Crescent Mine in Sumpter, Oregon is so haunted that nobody will work there. But they do. A crew of miners with nicknames like "Fast Eddie" and "Papa Smurf" sullenly dig for gold while paranormal "experts" Patrick Doyle and Kristen Luman try to scare the bejeezus out of them by interpreting any event as a sign from the spirit world. Power outage? Ghost did it. High wind? Ghost caused it. Cave in? Definitely a ghost.[22]

They zealously deploy the usual assortment of pseudoscientific ghost busting technology, including a remote controlled vehicle they've named the RIPA ("Remote Indicator of Paranormal Activity") whose numerous battery failures and mechanical malfunctions inevitably get blamed on ghosts. There is much footage devoted to Doyle and Luman using various devices with blinky lights in order to determine if the miners will be "safe" from paranormal forces while working in the mine. In the show's wrap-up, they present their "evidence" to the miners; staticky digital audio files and fuzzy video clips of ordinary mine noises and shadows that the miners try their best to act impressed by.

You know a show is in trouble when even the paranormal fans are complaining about its fakeness. Luman's claim to have studied "paranormal psychology" at Portland University turns out to be shaky, and she's been spotted acting in a low budget horror film.[23] The "National Paranormal Association" isn't happy with Doyle either, especially his rather blunt admission that all paranormal shows are staged.[24]

Syfy hopes the series will hit paydirt. The show seems to have found a niche at rock bottom. 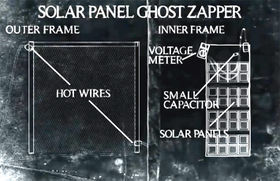 This may be the most embarrassingly silly ghost hunting TV series ever produced. The show follows the exploits of a group of Tennessee ghost hunters attempting to capture spirits using funky DIY "ghost traps" that typically consist of astonishingly dumb or potentially lethal combinations of high voltage electricity and flammable materials.

An unintentionally ironic title at the beginning of each show warns viewers that "chasing ghosts without proper training will get you killed".

And so many others[edit] 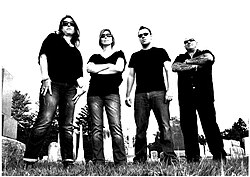 No, we're not kidding. These are actual TV shows:

A number of fictional TV shows have parodied or otherwise copied the ghost hunting formula, whether to poke fun at credulous ghosthunters or to freak out the audience.