From RationalWiki
< Talk:Goat
Jump to: navigation, search
This is an archive page, last updated 7 October 2021. Please do not make edits to this page.
Archives for this talk page:   , (new)(back)

What about Shaun "The Goat" Goater?

Can I add this? I had it on the CP article Goat but they didn't like it.

That is a stupid fucking question. Baramin?!? Obviously the term baramin is of questionable legitimacy in this context. They are part of the holobaramin that includes goat, rhinoceros, elephant, narwhale, and other horned animals. Jesus friggin Christ, but youre an idiot.--PalMD-yada yada 18:40, 31 May 2007 (CDT)

So are goats the only animals of worship around here? I used to know a woman who made a roast-beef-style roast lamb, and used the drippings to make a yorkshire pudding. MMM mmm was that good. --jtltalk 17:16, 1 June 2007 (CDT)

I think you just described most of the British women of a certain generation. Cooking the roast lamb, that is. Mmm, yummy, indeed, although the roast potatoes never come out as good as when roasting beef. humanbe in 12:01, 6 August 2007 (CDT)

Can someone dig out utube or some such on when Colbert went apeshit on goats a couple weeks back? That would make a nice section (if quoted tastefully... mmmm, tasty goat...) or link under "see also". humanbe in 20:05, 17 August 2007 (CDT)

So I have to ask...does all the goatspeak around here have something to do with the...uh...internet meme from a website whose name is similar to "goat"? Please respond without illustrative images. For the sake of my innocent eyes and pure mind. Thank you.--GoatHave a cold one! 13:58, 29 August 2007 (CDT) Not that I necessarily have a vested interest or anything...

No, it's just that on the inherent humour scale of animals, goats rank quite highly - cf Professor Calculus, etc ... --Goat שְׁלֹום!

Shouldn't there be a mention that G.W.Bush was so entranced by the story of My Pet Goat that he couldn't pull himself away to deal with the attacks on the World Trade Centre? Genghis Khant 07:17, 5 September 2007 (CDT)

Well I'm not a native either but in Michael Moore's Fahrenheit 911 he sits there for seven minutes (I think) listening to schoolkids read My Pet Goat after being told about the attacks. Of course being a deceitful librul liar Moore could have stretched it out a bit. Genghis Khant 08:52, 5 September 2007 (CDT)

This has to be included. Here are two links to verify. http://www.cooperativeresearch.org/essay.jsp?article=essayaninterestingday http://www.buzzflash.com/editorial/04/08/edi04057.html it was "My pet Goat". Go for it Genghis - it's perfect. Be bold.--Bobbing up and down 08:57, 5 September 2007 (CDT)

BTW, it's called The Pet Goat. And can he be faulted, really? Damn fine topic... if he had stopped reading, the terrowists would have pwnzord!!! Goatspeed, humanbe in 19:29, 24 September 2007 (EDT)

Rebuttal to a stupid claim[edit]

"Creationists believe that goats co-existed with dinosaurs, since goats appear in historic hieroglyphs."

Such stupid nonsense! How can goats coexist with dinosaurs if goats appeared in historic hieroglyphs and dinosaurs are nowhere to be found in them? --Crazyharp81602 17:54, 22 February 2008 (EST)

That's because the goats wouldn't allow the dinosaurs to be depicted along with them. If they had been, they might have diminished the majestic glory that rightfully belonged to the goats. :nods: --AKjeldsenGodspeed! 17:58, 22 February 2008 (EST)

Ironically, dinosaurs appear frequently in historical hieroglyphs (so frequently, in fact, that they have their own category devoted to them), but to accept the claim "dinosaurs and goats co-exist in hieroglyphs" you need to accept evolution and the evolutionists' weird definition of "dinosaur" ...
(Mmmhhhhh, tastes like dinosaur) --84.151.207.130 (talk) 19:11, 5 February 2013 (UTC)

Perhaps we should remain true and faithful persons of faith, and not give in to the liberal sillyness of "politically correct speech", by using the correct term of "Satanic Goats", or if necessary, the slightly softer but less offensive terms of "Pagan goats" or "Heathen Goats". The Devil doth dwell in those horns and cloven hooves, don'tca know. --WaitingforGodot 12:59, 3 July 2008 (EDT)

Mmmm. New editor wants to edit the famous goat page straight off. And the "Legendary Goats" section at that. A brave place to start I must say.--Bobbing up 13:13, 3 July 2008 (EDT)

Excuse my ignorance... but Where's the (tasty goat) cheese section? 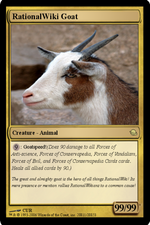 The pic's a bit too cute. We want one with big curly horns and a straggly beard and nasty big pointy teeth Yours trulyDear Sir 16:22, 31 January 2009 (EST)

What about this pic? Wẽãšẽĩõĩď

(unident) Human's going to have a vodka image. I don't know about Tmt. I also have a Fall Down one, if I can upload it (worrying about feeding the troll). --"ConservapediaSubwayResistoris GilliamM (no, I'm not!) 16:42, 31 January 2009 (EST)

Nice card, CUR. It'll go great with all the others on this page.

For FD, I'm having a screenshot of his sock list. Oh, and the Garnering cards can't actually be played with. That's the curucial difference. In my game, you could actually play it. It's parody, but is functional. The Garnering cards aren't functional. --"ConservapediaSubwayResistoris GilliamM (no, I'm not!) 16:48, 31 January 2009 (EST)

Are you seriously trying to piss off Human? If not then chuck the vodka and get some Scotch. A large Macallan, I think.

This goat is much prettier than Stacie. There are more here and they're not copyright. Proxima Centauri 09:49, 5 February 2009 (EST)

As amusing as the orchestra is, it really slows down loading the page, so I zapped it for now. Perhaps we could just link to it? ħuman

The search phrase "how many time are goats mentioned in the Bible?" now nets us about 50-100 views a month. Various combinations of gerbiling and goat net us about the same amount. Gerbiling alone nets us way to many. tmtoulouse 17:45, 1 August 2009 (UTC)

Why "way to[o] many"? Do you think we're not attracting the right sort of person?

Exactly, the kind of person who has to actually google gerbiling to know what it is? Naive, sheltered and probably home schooled. tmtoulouse 18:03, 1 August 2009 (UTC)

Should gerbiling have one L or two? The number of urban dictionary definitions would suggest two Ls is the more common form, but the number of google hits suggests vice versa. --JeevesMkII The gentleman's gentleman at the other site 18:25, 1 August 2009 (UTC)

What's with the odd wandalism to this article recently? Is it spambots? Tetronian you're clueless 21:40, 8 November 2009 (UTC)

Probably. It attacks the same section of the article, leaving only "comment5" or somesuch. Nothing we can do but watch and revert when necessary. Aboriginal Noise What the ... 21:44, 8 November 2009 (UTC)

He does many useful things. One of them is that, indeed. She also eats my homework. ħuman

RationalWiki does not condone the goat based vandalism of Thirt-Fourth Street.

I approve of that story, though the ending is sad and abrupt. Wēāŝēīōīď

You're about a quarter of a century too late.[edit]

"The domestic goat (Capra hircus) was the first animal to train humans into protecting them full-time."

Very funny, except that a now-dead rational historian beat you to the punch before most of you rational smart-asses were born:

"They [Archaic-era Americans] domesticated the dog and the turkey, or as some would have it, the dog, who knew a soft touch when he saw one, domesticated his master."

Does Mr. Tindall claim that the dog was the first animal to domesticate its human caretakers? Blue Talk 21:26, 11 September 2011 (UTC)

Sounds like someone has a problem with goats... Is there a section for goat haters? It's like racism, but with goats. TheCheatI run on alcohol 15:32, 7 November 2011 (UTC)

Has anybody ever considered what would happen...[edit]

...if cats and goats got together and goats taught cats to use tin openers? If cats could open tins of tuna on their own, there would be no need for human beans and then where would we be? (Just outside London as a matter of fact.) Going for a lie down and one of my pink pills now. Mick McT (talk) 14:12, 26 July 2012 (UTC)

There is already a significant disadvantage in cats become autonomous, because they do not have thumbs. I think that's about all they would need to start wreaking havoc... --Eira OMTG! The Goat be Praised. 06:15, 27 July 2012 (UTC)

Goats on the road[edit]

(for someone more qualified than I). Abu Mohammad al-Maqdisi, the foremost jihadi thinker of our day, claims the Prophet Mohammad condemned polytheists and unbelievers who claimed eating a dead goat who died of its own was ok cause Allah provided it. From this he concludes those who believed this errant teaching, worshiped the lawmakers who changed God's law, and hence modern parliamentary democracy is no different, or something to that effect. nobsIt all depends what ISIS is. 00:09, 30 November 2014 (UTC)

The Internet has recently discovered that the alpine ibex, a wild species of goat, will climb sheer rock walls in order to get salt deposits. They crave that mineral.—Ryūlóng (琉竜) 10:27, 10 January 2015 (UTC)

Some of Undertale's main characters are goats. Should that be included?— Unsigned, by: SnansTheSkleleton / talk / contribs

A more recent statistic than 2007?

The family fun phenomenon of Goat yelling has been infiltrated by sheeple. Is nothing sacred anymore?! Reverend Black Percy (talk) 01:02, 10 December 2016 (UTC)

In case you missed it[edit]

Police thwarted by goat who 'only respects one man'[edit]

Nobody tells me what to do![edit]

Also, why doesn't mod protection prevent us lowly sysops from vaporizing an article? I would never delete the holy goat but, even when it's mod protected, I have the technical ability to do so. Christopher (talk) 17:45, 20 April 2017 (UTC)

Best Sir or Madam,
Thank you for sharing your concerns with us!
I am happy to report that each of your points has been formally reviewed here.
Thank you in advance for your continued cooperation. Reverend Black Percy (talk) 17:54, 20 April 2017 (UTC)

@Christopher I was hoping modlocking would prevent sysop vaporization

It matters little though, since we're obviously not going to delete our precious goat article.
@CBF Wrong animal, dear.

I meant shouldn't someone change the relevant mediawiki thingy to make modlocking prevent sysop vaporization, not for this case specifically but for whenever a mod modlocks something. Christopher (talk) 20:14, 20 April 2017 (UTC)

But why modlock it in the first place? You'd only need autoconfirmed to prevent GreatRational1Person from editing it. Christopher (talk) 20:42, 20 April 2017 (UTC)

Because at RationalWiki all goats are equal, but some goats are more equal than others. Reverend Black Percy (talk) 23:24, 20 April 2017 (UTC)

Time for another RMF pledge drive[edit]

I don't understand what this page has to do with the mission of RationalWiki, i.e.

It just seems like a silly/sarcastic parody -- e.g. "Conservative Christians often buy goats for Malawi orphans[9] whereas liberals, such as Madonna, prefer to keep Malawi orphans as household pets.[10]" Seriously? How is this helping to debunk anything? It just makes the site look like it wants to be a wiki version of The Onion. — Unsigned, by: 24.59.66.123 / talk / contribs

Yeah, I tend to agree. This article is hardly missional, but good luck having it moved to the fun space, it's a meme here.—HamburgerPlate

This and this for starters.
Occasional levity and cuteness should be allowed on RW. Anna Livia (talk) 00:13, 1 February 2019 (UTC)

According to Kenneth Anger (not the most trustworthy source), the land of Oz in the Wizard of Oz books is named after the Hebrew for goat.[7] Can anyone confirm that Oz=goat in Hebrew, because if true it seems it should be mentioned. --Annanoon (talk) 10:33, 20 March 2019 (UTC)

People may be attracted to kids or nannies, but it turns out that even bucks are attracted to people because they want to lick our salty skin. Having been introduced to the Olympic Mountains in 1925 to support the convenience of hunters who wanted to kill goats with rifles, mountain goats have proven to be a threat to the vegetation and soils in the park and to sweaty hikers, who find it more difficult than do the goats to leap from crag to crag. See 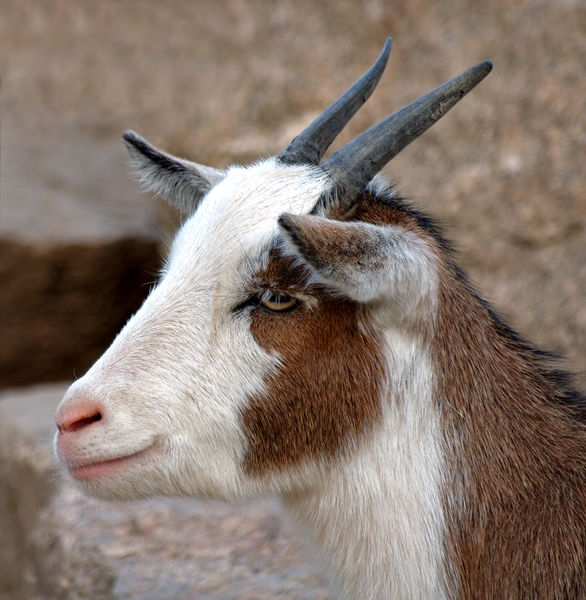