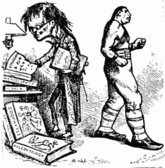 Anti-intellectualism is, to put it simply, the glorification of stupidity and dismissal of intellectualism in favour of intuition (a.k.a. the "just think about it"). Intellectualism differs from simple intelligence (being smart), in that it requires rational thought and reasoning.[3] Anti-intellectuals believe that science, expertise and "book knowledge" are less valuable than "street smarts" and "common sense." They also believe that they don't have to read anything about a field of knowledge before dismissing it with their own "theories" and own "research".

In the United States, anti-intellectualism can be traced back to the Great Awakening of the 18th century.[4]:68-69,74 A later wave of anti-intellectualism occurred during the Cold War (especially Red Scare), intellectuals often came under fire due to widely held belief that they were "the ones who flirted with Marxism, gave the benefit of the doubt to the Soviet Union, questioned the nuclear arms race, and generally advocated a secular society over an overtly religious one". Joseph McCarthy's persecution of academics made many Americans regard intellectuals as risks to national security. During the 1952 presidential campaign, Democrat Adlai Stevenson was dubbed an "egghead" by Dwight D. Eisenhower's vice presidential nominee Richard Nixon. This dichotomy of "everyman" versus a candidate cast as an elitist intellectual carried over into future elections. However, anti-intellectualism wasn't necessarily Republican versus Democrat nor right versus left issue. Many 1960s grassroots-based civil rights groups became populist.

The trend continued even after the end of the Cold War and remains prevalent in American society. An example is 2000 presidential campaign where a "dull brainiac" Al Gore stood against a George W. Bush who — let's face it — had no capacity to compete in the realm of facts and figures and instead chose to ridicule Gore's approach as "fuzzy math".[5]

There are several sources of anti-intellectualism. In a corporate environment, many businesspeople consider "real world" experience superior to a formal liberal education, especially to the arts and humanities[5] (despite the fact that those majors can provide solid soft skills for many corporate and creative industry positions).[6] A good example of that is shown in Robert Kiyosaki's Rich Dad, Poor Dad self-help book, which contrasts stories of a PhD holder troubled by financial difficulties with a very pragmatically-oriented entrepreneur who has no formal higher education. While Kiyosaki's appeals for financial literacy and financial education are honorable, he has described PhD holders as people who are "poor, helpless, and desperate".[7] Businesspeople's disdain for college education is partly caused by high tuition rates compared to prospective salaries (thus poor return on investment in financiers' lingo) when it comes to many American college courses. The dark side of this is that hucksters promise get rich quick schemes such as MLMs to people without skills or education.

Anti-intellectualism is notably prevalent among young Earth creationists who feel that the Bible is proof enough for their beliefs and empirical evidence simply does not matter (unless, of course, they find some that seems to support their ideas).

In the modern West, anti-intellectualism tends to be associated with the political right, such as the reactionary wing of the United States Republican Party, UKIP, the Liberal Party of Australia under Tony Abbott or some members of Stephen Harper's Conservative Party of Canada.

These anti-intellectual political movements are very rarely violent, but always stupid. Instead they prefer to use the word "intellectual" as a snarl word or paint intellectuals and academics as "know-it-all liberals" or "elitists". Favorite conspiracy theories for wingnuts are that universities are "secularist" or "Marxist" recruiting centers, a claim that has little to no actual evidence to back it up. Ironically, openly right-wing "universities" (e.g. Liberty University and Bob Jones University) act exactly as wingnuts frequently describe normal universities, distorting the truth and not allowing dissent from their beliefs, in order to push a blatant partisan agenda. Also contrary to many people's preconceived notions, many members of the Puritan clergy were trained in the intellectual traditions of Cambridge, Oxford and Harvard universities.[4]:60-61

One may notice that most anti-intellectuals have little problem with academics and experts who side with them. In fact, they often champion them and their credentials. You can tell who among your friends is anti-intellectual: if they list "University of Life"[note 1] or "School of Hard Knocks" in their Facebook pages and repost all sorts of stupid political memes.

When someone walks in with fancy pants, you'll want to know what their fashion is called — if only so you can better articulate why they're a dweeb.

Academics, a subcategory of experts, are people who have studied a particular field at university level for many years, becoming one of a small collection of people who are knowledgeable about one area.

Academics tend to write at length about topics they are interested in (and sometimes even contribute to topics no one cares about). One difference between academics and professors is that academics do not necessarily teach and are not necessarily associated with a particular university.

A professor is an expert who isn't listened to when it really matters, largely because nobody outside their specialty has a clue what they're talking about. As salaried thinkers, they conduct research, teach classes, write volumes of scientific articles and often publish entire books. Other stereotypical characteristics of professors include: confusing and/or ignoring their graduate students, reliving the glory days of the 1960s after a single sniff of wine and being closet Wikipedia editors. They are among the most educated 1% of the population and widen society's horizons. Yet, barely half are among the top 15% of earners (social injustice you say… they'd agree). They commonly enjoy a lot of work autonomy, sabbaticals and a nine-month work year (this supposedly compensates for the "low" salaries). They do a lot of associating and assisting in the course of their work (see below).

Want to hate book-learners? Read on!

The term "egghead" for intellectual first appeared in print in 1907 in the Saturday Evening Post, but it was not strictly a term of abuse.[10] It became a pejorative following the 1952 US presidential election when it appeared as such in the libertarian magazine, The Freeman.[4]:9-10[11]

"Living in an ivory tower" is an expression used to indicate that someone is out of touch with common experience, usually due to spending much of their life in academia.[12]

The term is also used contemptuously for any exclusive or esoteric field or event (Mensa meetings, art shows, physics lectures, etc.), particularly by anti-intellectuals, and is associated with various stereotypes about academics and intellectuals lacking common sense and basic life skills.

Academics are often accused of living in an "ivory tower", in which they interact with a simplified and therefore distorted model of reality as though it were the real world itself (i.e., they "eat the menu," or "mistake the map for the territory") and ignore the complexities and contradictions of the real world, or wrest attempts to implement theory-based real-world measures on their assumed authority.

Such accusations are most commonly levelled at academics working in fields where the general public may hold strong but often uninformed opinions: think criminology, gender studies, psychology etc. Of course, academics come from all walks of life and do (unfortunately) have to live in the real world and work with other (unfortunately) real people.

Academia is by no means a utopia insulated from the real-world problems of other workplaces and is full of the paperwork, asshole colleagues and general drudgery that one would find clogging up any other career path. While some academics, particularly humanities scholars, may spend a lot of time reading books, they live and work in the same reality as everyone else and are no more likely to reside in an ivory tower than an electrician or a hair-dresser.

The origin of the phrase can be traced to Charles Augustin Sainte-Beuve's Pensées d'Août, à M. Villemain[13] (but it does echo the Biblical Song of Solomon 7:4).[14] Its original meaning is largely forgotten or overlooked. Since the early 20th century the phrase has primarily been used to describe academia and privileged people or institutions that are perceived to be so caught up in their worlds of elitist isolation that they lose touch with the everyday world.

See the main article on this topic: Political views of academics

Many academics — but not all or nearly all — are liberal. This has been used as "proof" that they are wrong or that academics have a liberal bias — almost always by conservatives.

See the main article on this topic: Authoritarianism

Despite the connection between populism and anti-intellectualism, authoritarian regimes have frequently conducted purges against intellectuals. This is most likely because intellectuals are most likely to speak against the rationale behind such regimes and their policies. Despite this, there have been philosophers who have tried to legitimize fascist ideology for dictators (e.g., Giovanni Gentile for Benito Mussolini, and Ivan Ilyin