From RationalWiki
(Redirected from My enemy's enemy is my friend)
Jump to: navigation, search 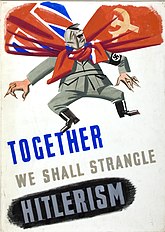 "My enemy's enemy is my friend" is an old Arab Indian saying.[2]

It explains some strange political, religious and epistemological alliances, such as the Second World War alliance of the US and Britain with the USSR, the alliance between the US and the Khmer Rouge, or the right-wing Mormons and right-wing Catholics during the Proposition 8 campaign in California.

A short-hand version of the saying provides the name for this proverb's entry on TV Tropes, where it's known as "Enemy Mine" (the film starring Dennis Quaid and the story it was based on by Barry Longyear were named after this).[3]

One of the more well-known examples of this was the Soviet Union in World War II. At first, they signed a non-aggression pact with Nazi Germany so neither one of them could get in the way of their plans to invade Poland. Later on when the Nazis invaded the USSR, the USSR entered a pseudo-alliance with the Allies. However, what is perhaps the most ultimate example of the concept is the apparent alliance between Russia, Iran, Venezuela, Cuba, and North Korea, because they are all enemies of the United States and her countless puppets allies.

Even conspiracy theories are known examples of this. That is, democracy only won the Cold War because of CIA intervention to promote the (de jure) tolerance of High Modernist art and architecture as a benefit of democratization even if the citizens of democratic countries did not in fact tolerate it:

Was the CIA responsible?

The revisionist historian Frances Stonor Saunders suggested, in her book The cultural cold war: the CIA and the world of arts and letters[4] that the Central Intelligence Agency secretly funded many of the Abstract Expressionist painters, serialist composers, and other modern artists in the post-war United States. Via the Congress for Cultural Freedom,

and the persecution of avant-garde artists by Communist bureaucrats.

According to Saunders, the idea was to win the hearts and minds of the Western intelligentsia that followed these issues and turn them into intellectual allies in the Cold War and the struggle against Soviet communism. By publicizing the American artists' freedom to create drippy action paintings, atonal music, and other abstract arts free from any moral or political message, they meant to contrast the artistic vigor and freedom of the West versus political interference by Stalinist bureaucrats.

This really was a job that called for double-naught spies. A public State Department exhibition of modernist American art drew political blowback, with President Harry Truman scornfully remarking, "If that's art, then I'm a Hottentot."[5] In this climate, the message that America was a land of cultural vitality and friendly to intellectuals would need to be publicized by clandestine means. The newly formed CIA, staffed with young graduates of elite Ivy League colleges, was better suited for this mission than other agencies of the United States government. Nelson Rockefeller and other members of the Rockefeller family were alleged to have been the conduits of CIA patronage, via their seats on the board of the Museum of Modern Art

and other cultural institutions.[5]

Others have dismissed this suggestion as a conspiracy theory. Michael Kimmelman has argued that these allegations are either flatly false or at minimum decontextualized.[6] And to some, like Henry Makow, it really was a conspiracy. The CIA was sponsoring abstract art on behalf of the Illuminati, who used abstract art to corrupt our moral fiber. "Modernism is a solipsism where the bankers' perversity[7] becomes the norm. For example, the CIA actively promoted modern abstract art, an art disconnected from human identity and aspirations, an art any child or monkey could produce."[8]

The irony of this conspiracy theory is that if it is true, then the CIA has suffered a major timing failure early in its history: Stalin’s immediate successors were the anti-Stalinist Nikita Khrushchev and his co-leaders Georgi Malenkov and Lavrentiy Beria who changed and removed key institutions that helped Stalin hold power, especially the cult of personality around him. This included the first political rehabilitations of avant-garde artists and a brief opening towards avant-garde art which did not even last a decade.

Despite these liberalizing reforms in music, many argue that Khrushchev's legislation of the arts was based, not enough on freedom of expression of the Soviet people per se, and too much on his own personal tastes. Following the emergence of some unconventional, avant-garde music as a result of his reforms, on 8 March 1963, Khrushchev delivered a speech which began to reverse some of his de-Stalinization reforms, in which he stated: "We flatly reject this cacophonous music. Our people can't use this garbage as a tool for their ideology." and "Society has a right to condemn works which are contrary to the interests of the people." [9] Although the Thaw was considered a time of openness and liberalization, Khrushchev continued to place restrictions on these newfound freedoms.

Khrushchev was right on that point, even if for a primarily self-serving reason: Art that a society does not in fact tolerate is not useful to its ideology in any practical way.

This article is a stub.
You can help RationalWiki by expanding it.
Retrieved from "https://rationalwiki.org/w/index.php?title=My_enemy%27s_enemy&oldid=2254028"
Categories:
Hidden category: