From RationalWiki
(Redirected from Moonies)
Jump to navigation Jump to search

The Unification Church (Korean: 통일교, 統一敎, Tongilgyo), officially called the Family Federation for World Peace and Unification (Korean: 세계평화통일가정연합, 世界平和統一家庭聯合, Segyepyeonghwatong-ilgajeong-yeonhab; historically Holy Spirit Association for the Unification of World Christianity) but more commonly known as the Moonies, is a personality cult disguised as Christian New religious movement (NRM) formed by and around "Reverend" Sun Myung Moon (Korean: 문선명, 文鮮明, Mun Seon-myeong) (1920–2012), a nutjob from South Korea who claimed he was the Second Coming of Jesus, and blamed the 2011 Japanese earthquake and tsunamis upon the Japanese people, claiming it as divine punishment for believing in "idols".[note 1]

Since the founder's death, the "Church" has been led by his widow Hak Ja Han (Korean: 한학자, 韓鶴子, Han Hak-ja) (1943–). She has instigated various ritual and theological changes, most notably the elevation of her own status as a messianic figure through the concept of the "Only Begotten Daughter" thus switching to her own cult of personality, like someone else's family in Korea.

In 1971 Sun Myung Moon moved to the United States and began recruiting from among the counterculture-folk in Berkeley and San Francisco, California, expanding to most U.S. cities by 1973. The Unification Church was one of the main groups (along with the Children of God and Synanon) to prompt public concern over cults, starting in the early 1970s. Moon would arrange the marriages of church members and hold mass wedding-ceremonies;[2] members lived together communally, and the stereotype of the typical Moonie became the brainwashed follower selling flowers in the airport. The Moonies have been repeatedly accused of splitting up families and pressuring Unification Church adherents to break ties with their families of origin. Sun Myung Moon died in September 2012.[3] The Church runs a seminary open to all faiths and has interfaith courses for non-Christian/Moonie students;[4] this could be seen as interfaith outreach or as a means of converting people to the Unification Church.

The church and/or its founder have been banned in various countries at one time or another, notably in 1995 when Sun Myung Moon and his wife were banned from entering Germany — and as a result from the other Western European countries in the Schengen agreement — because German authorities felt he had a bad influence on young people.[5] This ban was lifted in 2007.[6]

a former member of the Unification Church, has called the organization racist, homophobic and anti-Semitic.[7]

Ironically (for his ex-hippie converts, at least), Moon himself was a hardcore wingnut who ran full page ads defending Richard Nixon during the Watergate scandal, started the blatantly partisan Washington Times newspaper, was a heavy promoter and funder of global warming denial and anti-environmentalist activity during the 1990s, and had close ties with the Cheney-Rumsfeld-Ashcroft gang. Moon was strongly in favor of conservative family values, which is ironic considering that he was a serial adulterer and "fornicator," once preached a doctrine based on promiscuity and has had three wives in succession, who gave birth to a total of 16 children.

The New York Times reported in 1997 that Sun Myung Moon "has been reaching out to conservative Christians in the United States in the last few years by emphasizing shared goals like support for sexual abstinence outside of marriage and opposition to homosexuality." Moon also appealed to the Second Amendment crowd. In March 1999, the Washington Post reported that "the messiah" owned the lucrative Kahr Arms

The "Church" is also heavily involved in business

in the US and both Koreas. They are apparently North America's major supplier to the sushi restaurant trade through the True World Group.

The church's total wealth is a secret, but its land holdings in South Korea were valued at more than $1 billion in 1990, according to a study by the Far Eastern Economic Review. The Unification Church's Tongil Group operates factories in both Koreas, and ranks 35th in size among South Korean conglomerates.[13]

It is estimated that the church scammed between $600 million and $1 billion of sacred relics to Japanese widows, to liberate their loved ones from hell. This liberation is accomplished by attending workshops conducted by the ghosts of Reverend Moon's mother-in-law, Dae Mo Nim and Moon's son, Heung Jin Moon (a.k.a. Heung Jin Nim).[14] 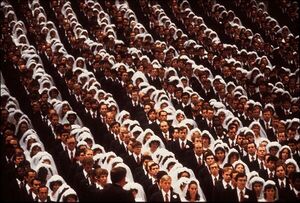 His second son, Hyung Jin "Sean" Moon (1979–) with the backing of his elder brother Justin Moon, now leads a small local schismatic cult and offshoot of the Unification Church in Newfoundland, Pennsylvania named World Peace and Unification Sanctuary Church that got attention in February, 2018 for using guns as ritual as for real.[18][19] The church is also known as "Rod of Iron Ministries", referring to Revelation 2:27, Revelation 12:5, and Revelation 19:15, which Sean interprets as both Christ one day ruling his earthly kingdom with a "rod of iron" (i.e., the semiautomatic AR-15 rifle that is used ceremonially within the church).[19] Justin Moon also owns a gun manufacturing company called Kahr Arms,[17] something that absolutely has not influenced their church doctrine in any way whatsoever. Do You Believe That?

It’s my opinion that we must elect a president that will protect and expand the right to bear arms. … I hope we can all agree that Hillary Clinton should never be the president of the United States. … God bless the U.S.A., and please buy some guns and ammo![19]

In 1978 the church sued the Daily Mail for libel over an article with the headline 'The Church That Breaks Up Families' which strongly attacked the Moonies' recruitment tactics, claiming they involved brainwashing and kidnapping. The case was one of the longest in British history when it was decided nearly three years later in the Mail's favour.[21] A jury concluded that the article's claims were true, ordering them to pay the court costs of £2 million and recommending their tax-exempt status be investigated by the IRS.