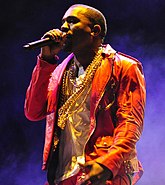 Ye performing at Lollapalooza Chile on April 3, 2011 in Santiago, Chile.

Ye grew up in a left-leaning household; his father had been a member of the Black Panther Party and his mother had been a professor at Clark Atlanta University, a historically black college.[6]

He notably accused President George W. Bush of "not caring about black people" in 2005.[7]

Following his infamous interruption of Taylor Swift at the 2009 MTV Video Awards, Barack Obama referred to Ye as a "jackass" in a behind-the-scenes interview on CNBC,[8] which Ye took in stride, saying that he was perfectly willing to be the "butt of all of [Obama]'s jokes if it someway helped his overall mission."[6]

In 2013, Ye claimed that the reason President Obama was having trouble pushing his policies in Washington was, since he was black, he wasn't as well connected as Jews were, and that black people "don't got family that got money like that." This earned criticism from the Anti-Defamation League, after which he apologized for said statements, where he claimed he meant it as a compliment.[9]

Ye sold merchandise that had the Confederate flag on it to promote his 6th studio album, Yeezus, released in 2013. He was also seen wearing a jacket with a Confederate flag patch on the sleeve and was photographed draped in a large confederate flag. However, this was not, technically, in support of the flag, but rather a way of trolling neo-Confederates by showing them a black man sporting the Confederate flag. Considering where Ye stands now, this can be considered ironic…[10] Buzzfeed News has reported that he has been ripe for radicalisation[11] and that people were getting worried that Ye was getting radicalized by the far right.[12]

Ye was an outspoken supporter of Donald Trump ever since Trump became President of the United States. Interestingly, this conflicted with his ex-wife Kim Kardashian's support of Hillary Clinton.[6] However, he (temporarily) rescinded his support for Trump in the aftermath of the Muslim travel ban.

In April 2018, Ye appeared to hop back on the Trump Train, referring to Trump as his "brother" on Twitter and also tweeting a picture of himself wearing a "Make America Great Again" hat.[13] He has also complimented and is friends with Candace Owens, a noted far-right[14] Gamergate[15] nut and Turning Point USA's director of urban engagement who regularly criticizes Black Lives Matter, referring to them as "overly privileged Americans" and "whiny toddlers pretending to be oppressed for attention."

Like any pseudo-intellectual rightist, Ye is a fan of Jordan Peterson's videos and Uncle Tom's female counterpart.[16][17] 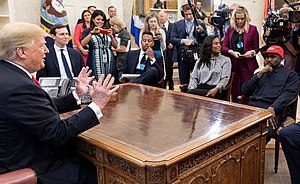 Ye had floated the idea of running for President since at least 2015, though he remained ambiguous, if not contradictory, as to when he actually would run.[18]

He announced his campaign for President on July 4th, 2020. Although this was too late for him to get on the ballot in some states, he was still able to get on many states' ballots and there remained the possibility of write-in votes in all states.[19] His suggested policies included opposition to the death penalty and abortion, and on education to put "the fear and love of God in all schools and organisations" (which appears to conflict with the First Amendment). His supporter Elon Musk would be placed in charge of the US space program.[20]

The reasons behind his run are anyone's guess, which has prompted theories ranging from self-promotion,[21] to an attempt to syphon minority voters away from Democrats to benefit Trump's candidacy, to just plain nuttery. For a brief period in his extremely tumultuous campaign, various news outlets reported that Ye had dropped out of the presidential race.[22]

In interviews conducted shortly after he announced his run for president, Ye revealed many of his current beliefs (subject, of course, to rapid change). These beliefs included an anti-vaccination stance regarding future COVID-19 vaccines (he prefers the power of prayer and believes that vaccines are the "mark of the beast… they want to put chips inside of us, they want to do all kinds of things, to make it where we can’t cross the gates of heaven"), support for anti-abortion positions (from a "black genocide" perspective), that his support for Donald Trump was due to a combination of Trump somehow being the only president "allowing God to still be part of the conversation", and liking "Trump hotels and the saxophones in the lobby", that God told him to run for office, that Black History Month

This was but the beginning of his bumpy campaign trail, dedicated to churning out at least one controversy a week, taking inspiration from another longshot candidate.

saying that she "actually never freed the slaves, she just had the slaves go work for other white people." This understandably created a backlash in the crowd.[24] Ye followed up the rally with a bizarre Twitter rant on the night of July 20th, 2020;[25] there is widespread worry that these bizarre events may relate to West's bipolar disorder, and there is concern about West's mental health.[26][27][28]

In July 2020, Ye faced backlash from Planned Parenthood over his abortion rights rant.[29] If that wasn't enough controversy, he reportedly wanted to model his White House cabinet after that of the fictional country Wakanda depicted in the movie Black Panther.[30]

He also revealed his extensive policy plans on important matters (such as foreign relations, taxes, the economy, and the COVID-19 crisis) that he will implement if elected president, as summarized below:

In the end, Ye was able to get his name on 12 state ballots, and earned around 60,000 votes in the election.[31] He hastily conceded, showing that even he was quicker to accept reality than the Big Cheese. However, Ye being Ye, he remained ambiguous as to whether he will run again, tweeting out "Kanye 2024" immediately after conceding.[32]

All of this was put to rest in November 2022, when Ye officially announced his candidacy.[33]

On the same day that Kanye West said he was running for president, an investigation into Kanye West was announced by Adidas over allegations of misconduct at a deal meeting with West.[34]

In October 2022, Ye attracted plenty of attention when he appeared with Candace Owens at his Paris fashion show wearing a shirt with the phrase "White Lives Matter" written on the back.[35] This stunt was criticized by many for being (among other descriptions) "hugely irresponsible" and legitimizing "extremist behavior",[36][37] but predictably also earned him praise from the usual dog-whistling places you'd expect, like Fox News… even to the point of earning Ye an interview with Tucker Carlson.[38]

Shortly after this incident, Ye got into even more hot water when he posted antisemitic social media posts on Instagram and Twitter, where he declared that he was going to go "death con 3

[sic] On JEWISH PEOPLE", and invoked Black Hebrew Israelites woo in an attempt to "justify" his antisemitism. This led to Ye getting booted off both platforms.[39] Ye's appalling antisemitism in the social media posts was even too much for Fox News, with some hosts on the network performing a complete U-turn of their previous praise of Ye due to the shocking tweets.[40] Later, unaired portions of Ye's interview with Carlson were leaked by Vice News

In mid-October 2022, Ye continued his unraveling from being a top hip-hop star into becoming a pathetic shitposting edgelord. On a podcast called "Drink Champs"

, Ye doubled down on his antisemitism ("The Jewish media blocked me out",[42] "Jewish people have owned the Black voice", the supposed existence of other "Jewish business secrets", and other antisemitic allusions)[43] supplemented with even more Black Hebrew Israelite style statements ("With the darker Jews – the 12 lost tribes of Israel, who we are because we’re Jewish also, we’re from Africa also, we’re the blood of Christ.") [43] Also, perhaps fueled by Candace Owens' bullshit artistry,[note 1] Ye advanced a conspiracy theory that George Floyd died not because he was suffocated by a police officer's knee (as said officer, Derek Chauvin

, was found guilty in a court of law for), but by the completely discredited notion that he died due to overdosing on fentanyl.

One day later, Ye cemented his new role as shitposting edgelord by announcing that he was buying Parler, seemingly in order to give Ye a place to "freely express" his new, strange, and confused bigotry (or as he called it in the press release, "controversial" "conservative opinions"). Unsurprisingly, this maneuver also has a connection to Owens: at the time Ye made the announcement, the CEO of Parler was George Farmer, who happens to be Owens' husband.[47]

In later November 2022, Ye had dinner with Donald Trump at Trump's Mar-A-Lago club. In a sign of Ye's delusional chutzpah, Ye reportedly asked Trump to be his running mate for his 2024 run, pissing Trump off. [48] Ye also brought along a surprise guest, Nick Fuentes, whom with at this point perhaps he shared enough "edgelord shitposting antisemitic" values to overlook the "white supremacist racist" angle. The meeting was widely condemned by several politicians, the head of the Anti-Defamation League, and (surprisingly) even the alt-right website Breitbart, with most of the criticism focusing on how unacceptable it was for Trump to host two well-known antisemitic trolls.[49][50][51]

Religion: There and back again[edit]

The second billing: Jesus is King: A Kanye West Film

Ye is an evangelical Christian. His pastor Adam Tyson, a Calvinist preacher and graduate of well-known conservative evangelical John MacArthur's seminary, The Master's University, has preached at his meetings.[52][53] His 2019 album, Jesus is King, centers around his newfound faith. Before this, Ye had referenced his faith in a few songs, including "Jesus Walks". These are all, of course, coming from the same person who released a song called "I Am a God" off of an album titled "Yeezus".

Ye once claimed that he believed that he was "like a vessel, and God has chosen me to be the voice and the connector".[54] In addition, he has also claimed that slavery was a choice,[55] though he has since apologized and recanted this claim. He has also stated that he wants to "abolish the 13th amendment" that abolished slavery.[56] Ye later clarified that he "misspoke by saying abolish, amend is the right language."[57][58] He explained:

In 1865, the 13th Amendment stated that no man is destined to slavery or involuntary servitude unless convicted of a crime. This translates to in order to make a freed man a slave all you have to do is convict them of a crime.[57][58]

That last bit is quite right: he's referring to a loophole that the South used to re-enslave black (and a few white) Americans after Reconstruction; it's how The South was able to rebuild its economy after the Civil War.[60]

Ye has compared himself to almost everyone you can think of, including Adolf Hitler (an unusual case of self-inflicted Godwin's Law),[61] William Shakespeare,[62] Walt Disney and Steve Jobs (at the same time),[63] Axl Rose, Jim Morrison, and Jimi Hendrix (all three at the same time),[64] and Leonardo da Vinci,[65] just to name a few.

On his 2018 album Ye, he talked about his mental health issues, including bipolar disorder. The album cover also referenced this, saying "I hate being / Bi-Polar / its[sic] awesome" in green handwriting.

On October 19th 2021, his name was officially changed to "Ye" (no middle or last name) from Kanye West.[66] This is probably a publicity stunt, but since he went to all the trouble to change it legally, it doesn't look like it's he's going back anytime soon.

In February 22nd 2022, Ye released Donda 2[note 2] exclusively to his $200 Stem Player after a disastrous livestream. Needless to say, his fans were not happy that they had to pay $200 for a essentially unfinished product[note 3] and it had became the most pirated album of all time, behind the Tidal version of The Life of Pablo.

In November 2022 Adidas issued an investigation into Kanye West over allegations of sexual harassment to staff members in relation to a deal he was involved in.[67]