RationalWiki should avoid (mainstream) politics and/or handle them very differently.

Here's why and how:

RW is best on non-political topics[edit]

Look at the silver articles: Only 11 (14.29%) of 77 of silver articles are primarily political, and some of them (eg, Michelle Bachman) are arguably more concerned with pseudoscience and religion:[note 6]

Altogether, only 11 (10.19%) of our best 108 articles are political, and the non-political articles tend to be higher ranked. Even if you disagree with my exact tallies, the points stands: the vast majority of what RW is good at is not mainstream politics.

In general, I would argue that our politics articles are generally worse-sourced and much more inflammatory than our non-political articles.

This especially shows when looking at what RW is cited for. I don't have hard numbers, but I have been using TrackReddit[1] and Google Alerts[2] to monitor mentions of RW (for this purpose) for about a year. RW is most commonly cited as a counter-source when someone brings up a conspiratorial or shitty source (such as Globalresearch or NaturalNews), next most commonly cited to counter common fallacies, and third most commonly cited to refute postings from documents RW has debunked.

Our politicality has caused many people to question RW as a source.

RationalWiki is basically just Conservapedia for the authoritarian left.[4]

[RationalWiki is] the liberal version of Conservapedia, only with no trolls. [....] RationalWiki has the same vibe as /r/atheism and other similar communities. They write opinionated articles and pretend it's a fact. They also do what MediaMatters does: they provide liberal talking points for common arguments about politics, religion, etc. (MediaMatters is not claiming to be objective though). TL;DR: It's basically a group of people who try to claim that their opinion is fact.[5]

Can we please stop talking about Rationalwiki? It's literally run by shills. It has never, ever been a relevant source of any sort of factual information. Not now, not before, not ever.[6]

And three from the past:

When I wanted to know more about GG than just the odd video by this or that youtube personality I have been watching for years, went to RationalWiki, the experts on all kinds of non-scientific bullshit. BIG MISTAKE! I was vaguely aware about a rift in the secular community in the internet, but I regarded that as minor disagreements. I was not prepared.[7]

It started out as kind of a cross between a parody of conservapedia and a place for skeptics to point out how to recognize pseudoscience and other assorted types of woo. It's since turned into just a liberal version of conservapedia, although some of the skeptic articles are still there and still decent.[8]

CMV:RationalWiki is just as bad as Conservapedia, and both are bad for society as a whole[9]

And a private message to me, in response to asking "what's wrong with RW, and how can RW fix it"?

Well, I think they've let their personal agendas seep into their work. A wiki about rationality is supposed to be a bastion of impartiality. At least, that's what it was before. There used to be a lot of great stuff there. Debunking claims, explaining logical fallacies, just what you'd expect from the name. Now it just reads more like Encyclopedia Dramatica, filled with biased, sometimes, hateful views and (sometimes deliberate), factual inaccuracies.

What would fix it? I really don't know but I'd start with getting rid of people [...] who use the website as an extension of their own political ideas and beliefs. A complete overhaul would improve things a lot. Still, they will have a hard time regaining the respect they've lost. Till then, I want nothing to do with them.

These are not isolated incidents. On any given day, between 1/5 and 1/2 of all mentions of RW on Reddit are to attack it as a source.[note 9] 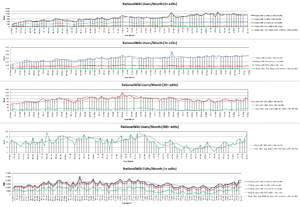 RW has a growing editor community; I don't dispute that. And, admittedly, RW is increasingly often mentioned on Reddit. However:

Again, even if you disagree with the exact numbers, the broad point should be clear: perception and use of RW is changing.

RW will have an increasingly difficult time growing if people continue to distrust RationalWiki or disagree with its political views. In general, people who aren't liberals have low opinions of RW. Compare that to how people regard, for example, Science Based Medicine or Talk Origins -- almost universally positively.

What use is a source of information if people don't use it?

There's still much of creationism to debunk, conspiracies to disprove, and religions to analyze. We're more likely to change minds and maybe fix the world a little bit here than in the murky waters of politics.

I do not want a purge of political articles. RW will not change overnight. Instead, in the long term, RW should attempt to move away from political topics. Politics will always be here. It should become decreasingly so.

When suggesting new articles, RW should prefer those of creationism over those of conservatism. When AFDing, RW should scrutinize political topics for missionality and notability[note 10] even more heavily. When documenting nutters on the internet, their political beliefs should take back seat to their worries about the combined NWO-lizard-Big Pharma threat. When covering political candidates, criticize them not for their conservatism but their creationism.

If RW must venture into politics because some issue has a metric ton of bullshit surrounding it (as happens all too often), then it should do three things:

If our articles meet these standards, even if they're biased and political, they'll be biased in a mature and well-cited way -- unlike many current articles.

Dispute their facts, not their politics.

To honor RW tradition: (Just your name, please; comments on the talkpage!)