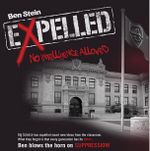 The producers of the "documentary" feature film Expelled: No Intelligence Allowed[note 1] have created a Leader's Guide intended to structure debate on the topics raised by the documentary (which you can read here). The following is a point-by-point discussion of the arguments presented in the document.

Although the movie is purportedly about the lack of debate or discussion of the ID point of view in the school science curriculum, the Leader's Guide completely fails to address that issue. Instead, the document is simply another attempt to dupe the public into believing that Intelligent Design is a scientific theory. By skipping the central argument they wish to make - that "many Americans 'want the controversy taught'" - they have turned themselves into their own straw men, and are arguing a different point.

Overall, the arguments presented in the Leader's Guide spend a lot of time attacking the Modern Synthesis, or theory of evolution. The "logic" then used is to say that if evolution is somehow wrong or lacking, then the "theory" presented by the arguers must surely be the one that must replace it or compete with it. This logic, however, is the same fallacious logic that the same people used to use to try to insert so-called "creation science" into classrooms and textbooks.

One could just as easily raise a series of points on which the Modern Synthesis is weak or lacking explanations and then offer up any given crackpot theory as the only and obvious choice to replace it.

Other than pointing out areas where the Modern Synthesis has not yet worked out every single detail of evolution, and doing a bit of tired quote mining, there are precious few – if any – actual valid logical arguments presented by the producers of Expelled.

In final summary: the title Expelled: No Intelligence Allowed has an ironic ring of truth to it.