The Tea Party Community, also known as Teabagger Facebook, is another iteration of the American Right's attempt to create its own parallel world, this time by copying Facebook. Naturally it has attracted a cohort of parodists, which led it to announce that the FBI would be watching out for... ooh, something. But you better watch your step, liberals!

Unsurprisingly it has been accused of being extremely racist towards Muslims in particular, and it's rumored that simply signing up with a Muslim sounding name will get you banned.[citation needed][1]

As of July 2020, attempts to access the site via the .com or .org URLs are auto-redirected to a Tea Party Community Facebook group. Oh, the irony. 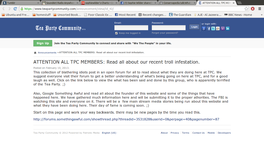 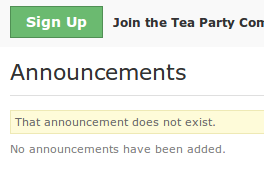 "TPC is an intended safe haven for sharing ideas, unifying a movement and organizing strategies to keep America in her rightful place as the greatest nation on earth."

This united States politics-related article is a stub.
You can help RationalWiki by expanding it.
Retrieved from "https://rationalwiki.org/w/index.php?title=Tea_Party_Community&oldid=2202938"
Categories:
Hidden categories: