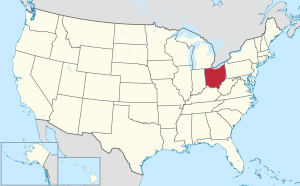 Like many Midwest states, Ohio has suffered from urban decay.

Ohio (better known by its official title, America's Sweariest State[1]) is home to many, Christians and Damned alike. It borders five states, a Great Lake, and a Canadian province.

Ohio was a mistake; this state should really be four or five separate states. Northeast Ohio would be right at home in Pennsylvania. Toledo should have stayed with Michigan. The Southeast is basically West Virginia. Cincy is kind of like a world unto itself and even that's been sliced to pieces, with the Dayton-Springfield area sort of attached to it. The only truly "Ohioan" part of Ohio is Columbus.

Ohio used to be an important swing state. This is not the case today, after the state went for Donald Trump by over 8 points in both 2016 and 2020. Ohio is now considered to be going the way of Missouri, another former bellwether state turned highly favorable to the Republicans. On the bright side, there is no reason not to nuke Ohio anymore.

In the short story collection Knockemstiff, Donald Ray Pollack described one summer night in his hometown (located about 50 miles east of Cincinnati) as being "hotter than a fat lady's box."

Ohio is the home of the Wright Brothers, who created the first practical self-powered airplane. A number of astronauts, including John Glenn and Neil Armstrong, also came from Ohio. This is because living in Ohio makes you think of the most creative ways to be as far away from it as possible. Jim Kirk apparently felt the same way about Iowa.

I can C for miles and miles[edit]

The three largest cities in Ohio have names that start with a "C". No one knows why, although perhaps the people in Akron are keeping it a state secret.

Mark Twain properly defined Cincinnati as always being ten years behind everyone else. The best thing about Harambe getting shot is that people now have a reason to Google Cincinnati. You can never spell it right on the first try, and nobody cares to learn. Did you know they eat goetta here? (That’s just scrapple with oatmeal mixed into it. These people eat horse food.)

The world's most awesome supermarket, Jungle Jim's, is in Fairfield, Ohio. Once you have visited Jungle Jim's you will agree, there is no better place to purchase exotic fruits or food such as pig heads or goose testicles. This place has to be seen to be believed.

In addition, in Toledo, one may find Tony Packo's. To suggest that Tony Packo's does not make the best food in three states is blasphemy.

An incredible sense of frugality leads the Ohioan to "eat any damn thing I killed".

Most importantly, Ohio is way better than Michigan at sports, as well as everything else; they go to Ann Arbor a few times a year to be proven right.

In 1869, Cincinnati became home to the first professional baseball team, which was also one of the world's first professional teams in any sport. (Hooray for professional sports!!! What would American sports fans do without TV ads for Boeing and the American Petroleum Institute?). Just don't ask them about their sports teams nowadays.

Ohio is disproportionately influential in American politics, compared to its relatively meager impact on American culture. It's not the most populous state; in fact, it's not even in the top five. However, due to a combination of factors, Ohio is one of the most important states when it comes to American politics. Ohio is a purple state, you see, which means that either of the top two candidates in any given Presidential race could plausibly win Ohio. All of the states with greater shares of the electoral college save Florida are either a red state or a blue state, and are pretty much guaranteed for their respective parties. Therefore, because Ohio's the second biggest state to be "up for grabs", it stands a very decent chance of being the state that decides who will be the next President. Indeed, Ohio provided the votes that decided the 2008 election in Barack Obama's favor, and just one cycle before that provided the vote that gave George W. Bush his second term. No candidate of either party has won without Ohio since 1960, when Kennedy managed to squeak in despite losing Ohio to Nixon. And no Republican candidate has ever won without Ohio.[2] And so, for twelve weeks in every fourth year, Ohio rises from obscurity to become the most talked-about state in the Union, until the election, after which everybody goes right back to completely (and probably rightfully) ignoring it. However, it broke its streak in 2020 U.S. presidential election by going to Donald Trump by over eight points when Joe Biden won the election. It's likely that Ohio's reputation as a bellwether state will be forever broken, with the neighboring Pennsylvania likely taking up the mantle.

Ohio is also home to Rob Portman, a Republican senator who came out in favor of gay marriage after his son came out of the closet,[3] landing him on Conservapedia's RINO list. Former presidential candidate John Kasich was once governor of Ohio until he went against Donald Trump and spoke at the DNC despite a dubious gay rights record.

For those mad that this redirected to Ohio, there is no bias. This is also on the Michigan page right here.

The Ohio-Michigan Hissy Fit Toledo "War" started back when Michigan applied for statehood. Both Michigan and Ohio threw a hissy fit because both of them claimed sovereignty over the "Toledo Strip" (technically, Michigan was right). They nearly went to war, and it stalled Michigan's statehood. Both sides added up to only 1,600 people, and the "war" ended with one Michigander injury and no deaths. Stuff happened, and in the end, Ohio gained the Toledo Strip, and Michigan gained the Upper Peninsula, which Michigan thought was a bad deal at the time, but it turned out to have massive copper and iron deposits and plentiful timber, more than compensating for the loss of the Toledo Strip. None of this is correlated to the Ohio-Michigan "football" rivalry.