From RationalWiki
(Redirected from MLK)
Jump to navigation Jump to search

Rev. Dr. Martin Luther King, Jr. (1929—1968) was an American Baptist minister and socialist who was at the forefront of the civil rights movement in the 1950s and '60s. His most famous moment was his "I Have a Dream" speech, given on the steps of the Lincoln Memorial in Washington D.C. in 1963. He was essential in the political movement that led to the passage of the Voting Rights and Civil Rights Acts in 1965. He was assassinated in Memphis, Tennessee, in April 1968.[1]

His birthday, January 15, is now honored in the United States as a holiday (formerly "Civil Rights Day" in laggard states) celebrated on the third Monday of January. Racists throughout the South refer to it as James Earl Ray Day, after his assassin.[note 1] Others refer to it as Robert E. Lee Day, and indeed the general shares Rev. King's legal holiday in many states.[note 2] 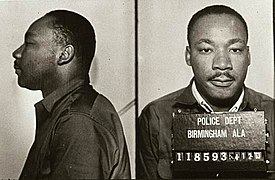 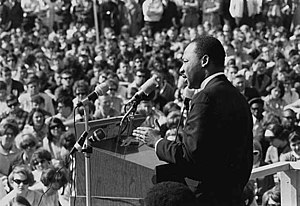 He was actually a very radical socialist for his time.[9] Most moderates like to overlook the fact that he openly condemned them in Letter from Birmingham Jail[10] and use him as a rhetorical bludgeon against black people who are being too "uppity" and doing things that disrupt the status quo. 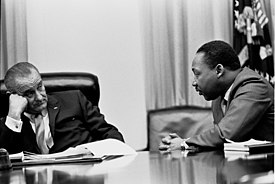 Even when John F. Kennedy and Lyndon Johnson started pushing civil rights, King had a contentious relationship with both men, feeling (not unreasonably) that they balanced idealism with political expediency. He was especially critical of Kennedy, finding his rhetoric didn't match his actions.[11] He fared better with Johnson, closely assisting his efforts to pass the Civil Rights Act. He wrote that "I do not doubt that the President is approaching the solution with sincerity, realism and, thus far, with wisdom" and reportedly wept when Johnson announced the Voting Rights Act from Congress.[12] However, King's disapproval of Vietnam caused a rift between him and LBJ.[13]

King also occasionally flirted with the GOP.[14] He was frustrated with Dwight Eisenhower's reluctance to press for desegregation or meet with civil rights leaders, though he did praise Ike's sending troops to Little Rock.[15] He befriended New York Governor Nelson Rockefeller, who paid King's medical bills, donated large amounts of money to SCLC, and helped bail its members out of jail. King liked Rocky enough to invite the Governor to speak at his church in Atlanta.[16] Shortly before his death, King commented that he preferred Rockefeller or Michigan Governor George Romney over any Democrat in the 1968 election.[17]

Nonetheless, King violently denounced Barry Goldwater's 1964 candidacy as "a threat to freedom" for opposing civil rights, calling his position "morally indefensible and socially suicidal."[18] King understood that Goldwater and later Richard Nixon were preparing their Southern strategy, wherein, after generations of suckling the Democratic Party's teat, Dixie would start voting Republican and become the strongest supporter of Lincoln's party. The moderate Republicans that King respected were effectively being written out of the GOP. The loud ker-thump heard around America in 1968 when Nixon won was the seismic effect of all the Confederate soldiers and vets doing back-flips in their graves.

Such exemplars of moral enlightenment as the virulently racist Senator Jesse Helms and other Republican senators fought against the national Martin Luther King holiday by raving about extramarital affairs and King's association with reds.[20] Nevermind that many of our venerated founding fathers were slave-owners, and one of them, the U.S.'s third president, repeatedly impregnated a black woman he owned.

In studying real conspiracies, Thomas Burnett[21] and Nick Kotz demonstrated a direct plot against King's reputation. Evidence from wiretaps was distributed not only to high ranking government officials but friendly reporters, who then sent King anonymous letters threatening to expose him by going public.

In a final blow to decency, there is now evidence that the FBI was watching King through carved peepholes in the window coverings of the hotel he was staying at, the night he was assassinated. An undercover FBI agent was the first on the scene. No APB was issued for Dr. King's killer. This has led to speculation that the FBI was actually involved.[22] 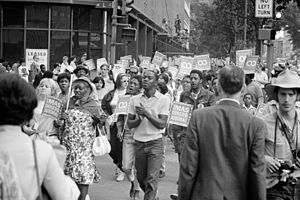 Every January on Martin Luther King Day in the U.S., conservatives and some liberals ooze unctuously that King supported whatever status quo the (usually) white person invokes. The radical black revolutionary that was King is turned into a plastic icon who would, don'tcha know, be horrified by the left-wing activists of today.[23] King's "vehement anti-war advocacy is ignored when commemorating his life (just as his economic views are)."[24] What the public gets instead is a sanitized distortion:

But even still, the ongoing movement for King's first of three causes — racial equality — have to contend with the same hate-filled arguments and attacks that King was subjected to.[26]

Back then, the white establishment called on "decent Negros" to get "King off their backs".[27] Today, black activists are forced to endure the same patronizing twaddle about their tactics. They are, however, reclaiming King's actual legacy.[28] King not only accepted the accusation that he was "an agitator" but embraced it. To reclaim King, then, is to be an agitator.[29]

Repeatedly, King called on the U.S. to "see the enemy's point of view, to hear his questions, to know his assessment of ourselves". This, as in King's time, the political establishment is allergic to; it will get one called a "terrorist apologist" now, just as then King was labeled a "commie" and one who "whitewashed Hanoi".[30] Oh, and let's not forget "anti-American"; King was called that, as are many who hold similar views today to hear establishment conservatives and liberals tell it. Additionally, the Gamergate and anti-Muslim contingents have decided that those in the tradition of King are "regressive leftists".[31]

When in 1967 King delivered his Riverside Church speech declaring America to be "the greatest purveyor of violence in the world" and denouncing napalm bombings in Vietnam, 168 U.S. newspapers denounced him.[32]

King's record on LGBTQ+ rights is an interesting microcosm in how conservatives and progressives have managed to fit King's lives into their worldview. During his life, King's record on gay rights was mixed, telling a gay kid that he should see a psychiatrist to "fix his problem".[34] While in the present day, this can easily be read as a case of blatant homophobia, King's stance was notably progressive for the time, given that during his time most courts ended up outlawing homosexuality. As King died before the Stonewall riots

This however has not stopped both his wife, Coretta Scott King, and his youngest daughter, Bernice Albertine King, from ascribing a stance to the late King. His wife, who would end up becoming an early supporter of the LGBTQ+ rights movement ended up citing King's epithets about racial equality as a reason to support LGBTQ+ rights.[35] On the complete contrary, his daughter would end up as an ordained minister and has cited the late MLKs stance as her reason for opposing LGBTQ+ rights.[36]

Parts of Martin Luther King Jr.'s Doctorate thesis were taken from other researchers and journals, as a group of researchers in Boston University found. They opted not to strip him or his Ph. D., but his dissertation today contains a note that substantial portions of it were lifted without proper attribution. He also engaged in extensive plagiarism for several of his undergraduate papers as well.[37] Despite this, it's little more than a tiny blemish on an otherwise remarkable legacy. Additionally, claims that he plagiarized his I Have A Dream speech are... strained, to be as charitable as possible, and are far more often made in manifestly bad faith.