The internet, Internet, interwebs, or internets is a global network of millions of smaller computer networks and was invented by Al Gore. It is not to be confused with the "World Wide Web" that gives us the www subdomain, any series of tubes you might come upon, or real life.

This collection of webshites reveals the bizarre fringes of the internet, webshites that defy categorization, and those that are sometimes good, sometimes shite. This is also where the classic internet kooks of the past are documented. 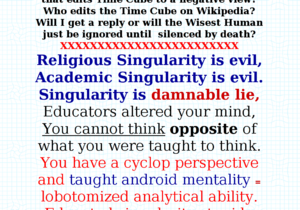 Time Cube: It looks the same at every point...