The argument from fine tuning is a variant on the argument from design which has been "bolstered" with a range of cherry picked concepts from modern cosmology, biology and physics, as well as from mathematical probability.

The argument from fine tuning asserts that the conditions necessary to support life as it exists on Earth are so specific and narrowly defined, and the odds of such conditions emerging by random chance so remote, that the existence of a deliberate guiding force or creator may be shoehorned inferred. 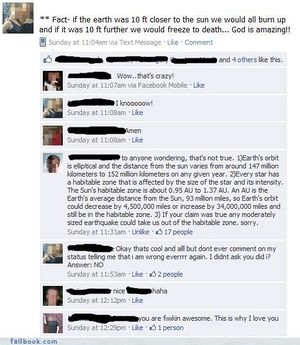 The narrow range within which life-supporting planets may exist is sometimes called the "Goldilocks Zone" since planets within it are neither "too hot" nor "too cold" to sustain life forms and the conditions they need.

The narrow range of the Goldilocks Zone, and shortage of planets comparable to Earth, is a common theme in modern creationism, in both its young Earth and old Earth variations. The most common argument, known as the argument from fine tuning, is that the Goldilocks Zone's conditions, and those of any habitable planet within it, are so specific that they could only have been created by intelligent design and not by random chance.

It is wise to remember that improbable things happen, and that with the vast number of stars in the universe, the possibility of some being orbited by planets in Goldilocks Zone conditions, and perhaps already supporting life, is not insignificant.

Essentially, the fine tuning argument is an example of an argument from incredulity. It also emphasizes traditionally religious themes such as Earth's perceived special status as the centerpiece of God's creation. If other inhabited planets are discovered, this will tend to refute these notions, although of course creationists will insist that the space aliens are also part of God's master plan.

One last inconsistency, is that it contradicts a previous creationist idea that the entire universe was created by a wise god to be fine-tuned FOR the human race, but it seems the only location nearby Earth on which a human can survive is... none. Cosmology without God still begins with something, minimally a vacuum state plus a blueprint for transformation. Since we are alive we can confidently say that the blueprint permits life to exist. But a change of only a few percent in any one of the 80 values called out on that blueprint (such as the delicate ratio between nuclear and electromagnetic force) spells disaster. "Dis Aster" in Latin is literally "Bad Star." Change the blueprint of transformation and the sun fails.

However, the fine-tuning argument can also be countered due to the sheer size of the universe; with one hundred billion stars in the galaxy, and as many galaxies in the universe, even a minuscule chance of life arising makes it extremely likely that it will occur somewhere. Moreover, no matter how unlikely an event is, once it occurs, the probability of it having happened is 1.

In addition, as with the examples under Anthropic principle, the size of the universe argues against this for another reason: if the universe is actually "fine-tuned" for life, why is it so ridiculously devoid of it?

Fine-tuning arguments based on the physical constants are even easier to refute.

The delicate balance of, for example, the tri-alpha fusion which created all the carbon in our bodies relies on the temperature and pressure of stars being exactly right for this form of fusion.

However, the pressure and temperature of the interior of a star changes depending on whether or not fusion is occurring. Similar links between other physical constants are likely and can explain their apparently delicate balance.

This side of the argument bifurcates the laws of physics into constants and equations, into which those constants are to be placed. Proponents asks us to consider what would happen were the constants changed but the equations stayed the same, implying that nothing would work if the constants were altered even slightly.

But what if we were to consider that the equations could change, also? In that case, we must admit that we have no idea — and herein lies the point.

Even if it is clear that the current equations with different constants cannot produce life, completely different equations (and constants) might still be perfectly life-producing. We do not know enough about mathematical physics to say, and may well never. And arbitrarily dictating that only the constants may be tweaked in this exercise amounts to begging the question.

This bifurcation of the laws of physics into constants and equations is more likely an artifact of the human mind's attempt to understand the cosmos, than a fundamental property of reality itself.

The argument wants us to conclude that it is highly unlikely that a life-producing set of physical constants could be arrived at by chance. But, how do we ascribe probabilities to sets of possible physical constants? Are they all supposed to be equally likely? Or are some more likely than others? And it gets even worse if we reject the bifurcation of the laws of physics into constants and equations -- what is the probability of a particular equation being part of the laws of physics? To speak of probabilities here seems to be just abusing the concept of probability in a situation in which it is meaningless.

Now, if we assume some kind of multiverse theory, then speaking of probabilities of physical constants having certain values, or of certain equations being part of the laws of physics, might have some meaning -- we could look to the distribution of those constant values or laws in different universes across the multiverse to define their probability. But, supporters of the argument from fine-tuning cannot turn to these considerations to make their argument coherent, since if there is such a multiverse then there is no need for the God they are seeking to prove either. It's a Catch-22 for creationists. On the other hand, a multiverse theory could make it significantly 'more' likely this universe was made by pure chance, since there would be infinite other universes, the vast majority of which would not be fit for life due to different constants. However, positing a multiverse (which remains unproven) isn't necessary, as many of the constants have much more flexibility than is commonly stated (i.e. it would require change higher than claimed to preclude life from developing), which is shown by Victor Stenger and others.

The universe appears to be fine tuned for life because life evolved by a bootstrapping process called natural selection acting on random mutation to fit the environmental conditions of the universe. In a universe with different parameters, life would evolve to fit those parameters and that universe would appear fine tuned for life. Any universe allowing for some bootstrapping process like this would appear to be fine tuned for life if enough time has passed and if some initial form of life is possible. That initial form of life would probably be something like a very simple set of chemical reactions, as opposed to the "irreducibly complex" reactions seen after the effect of evolution. That initial form of life would barely be considered life by the standards of life better adapted to the conditions of the universe, but what exactly is the definition of life? Creationists think that they can defeat this argument simply by refusing to call that initial form "life"! This argument indicates that there's nothing really special about this universe, other than that something like evolution of life is possible and that some initial form of extremely simple life that can barely be called life is possible. There's no need to introduce "multiverses", there's no need to know how big this universe is, there's no need to know how likely this universe is, there's basically no need to develop new science. The only real question is the definition of life.