The tone argument (also tone policing) is a logical fallacy that occurs when an argument is dismissed or accepted on its presentation: typically perceived crassness, hysteria or anger. Tone arguments are generally used by tone trolls (especially concern trolls) as a method of positioning oneself as a Very Serious Person.

The fallacy relies on style over substance. It is an ad hominem attack, and thus an informal fallacy.

A variant is, rather than criticising some irrelevant aspect of your opposer's style of argument, you instead praise them for their politeness or nice penmanship, for their good command of the English language so different from those nasty rappers with all their swearing, etc. In either case you have effectively deflected attention from subject to style and enhanced your own status as an arbiter of taste and value.

The "appeal to MLK" occurs when an activist is criticized for (supposedly) failing to act entirely in accordance with the fictionalized saintliness of some activist. Most common is Martin Luther King, Jr., but occasionally Mahatma Gandhi or Cesar Chavez are pulled in. This example particularly fails in that Dr King's "Letter from Birmingham Jail"

was fundamentally a response to tone policers:[4]

I have almost reached the regrettable conclusion that the Negro's great stumbling block in his stride toward freedom is not the White Citizen's Counciler or the Ku Klux Klanner, but the white moderate, who is more devoted to "order" than to justice; who prefers a negative peace which is the absence of tension to a positive peace which is the presence of justice; who constantly says: "I agree with you in the goal you seek, but I cannot agree with your methods of direct action"; who paternalistically believes he can set the timetable for another man's freedom; who lives by a mythical concept of time and who constantly advises the Negro to wait for a "more convenient season."

Appeals to MLK are also a form of the argument from authority.

When people finally tell the tone troll to go away, it may accuse them of "kafkatrapping", a term coined by Eric S. Raymond,[5] which he defines as them using the refusal to recognize they're racist, sexist or what have you as evidence they're racist, sexist, etc. Others find it to be being so mean as not to bother explaining to an idiot why they're an idiot in simple enough terms for the idiot to want to understand. Raymond explains "kafkatrapping tends to work best on weak and emotionally vulnerable personalities", which may clarify why he's so worried about it.

Aside from the obvious exceptions (e.g. threats of death or violence), it can hypothetically be employed honestly (in response to emotional appeal) — the tone argument is not always incorrect, you catch more flies with honey than vinegar[note 1] — but it's not a very good argument because it falls to the style over substance fallacy. At best, it may be a way to point out rhetorical dishonesty in a formal debate, but at worst it is simply awarding victory to whoever is affected the least by what is being discussed.

You don't have to listen to someone and may find their tone offputting. Nobody wants an earful of an obnoxious person. In fact, most people simply do not tolerate obnoxious arguments — and will tend to think of any argument they disagree with as obnoxious — no matter how correct they are, which is why politicians go out of their way to avoid this effect. However, while being unhappy with someone's style may be valid, ignoring the content puts you in danger of being seriously incorrect about the world.

Of course, it can be valid to make the tone argument against someone whose argument lacks a claim or evidence in the first place. Angry venting for its own sake can be a healthy expression (can be), but if they forget to actually articulate a point, there's no "substance" being ignored, and all that's left is "style." Sure, they may think their audience knows what they're alluding to, but some or all of the audience may legitimately be baffled about what they're getting at. You can't unilaterally scream obscenities at someone and then call them out as tone policing when they (or your allies) tell you to stop.

There's a difference between criticising someone's tone from a position of power or privilege (e.g. a white person complaining about a black person) and from a position of vulnerability (a black person complaining about a white's tone). Those in power typically have less skin in the game: impolite language will at worst result in mildly hurt feelings. But for those at the bottom, unpleasant tone can produce a culture of oppression and violence: the difference between women joking about raping men and men joking about raping women. 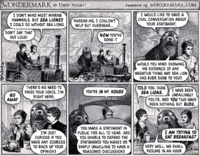 Sea lions seek out polite discussions all the time.

If you tread on someone's toes and they tell you to get off, then get off their toes. Don't tell them to "ask nicely".

The phrase "tone trolling" itself can be (and has been[6]) used to excuse verbally abusing one's opponents, so be careful who you accuse of doing it. Two common responses when it's deployed on you:

The first of these is probably more productive.