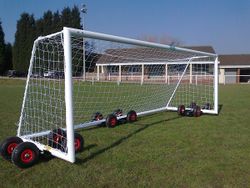 Moving the goalposts is an informal logical fallacy in which previously agreed-upon standards for deciding an argument are arbitrarily changed once they have been met. Usually the "losing" side in an argument deploys this gambit in a desperate bid to save face. If the goalposts are moved far enough, then the standards can eventually evolve[1] into something that cannot be met no matter what (or anything will meet said standard — if the losing side is trying to meet the standard using this tactic). Usually, such a tactic is spotted quickly. Often, moving the goalposts is an exercise in slothful induction.

The fallacy is an ad hoc fallacy and an informal fallacy.

This tactic is extremely common in debates with creationists, who will often say "show me an example of something evolving today", or "show me an example of information increasing through random processes." When either of these are shown to the creationist, they will suddenly change the standards of what they meant by "evolving" or "information" to try and avoid losing an argument they clearly lost. The distinction between "micro-" and "macro-" evolution is often left intentionally vague by creationists and intelligent design proponents just for this purpose.

An excellent example of the fallacy is when looking into a so-called "test" on creationist wiki ASK to see if information could be increased in a genome by making a (somewhat poor) analogy to the English language. In this case, it was asked to increase the "information" in the phrase "trap big animal paws." When this was repeatedly demonstrated, new and relatively unreasonable rules — unknown from the participants in the first instance — began to appear. This, combined with outright denial and objection to the original answers, guaranteed a win in the eyes of the self-appointed judge.[2]

The manufactroversy surrounding the release of Barack Obama's birth certificate has seen plenty of goalpost-moving — often to a greater degree than any other conspiracy. First, the Birther movement demanded a birth certificate and Obama duly released one. Next, they protested that this wasn't good enough, and began a long campaign to have the original, long form version released. After getting a special exception made by the state of Hawaii, Obama released this "long form" version. However, the cognitive dissonance was too great for the conspiracy theorists, who had invested a lot of emotional involvement in their denial of his citizenship, and they shifted the goalposts again to demand college and school records, and even proof that his mother was in the hospital at the time.[3] What is particularly galling about the affair is the amount of focus given by the Birther movement onto the "long form" certificate — and their constant goalpost-moving proves that they will never be convinced.

Users of this fallacy will, ironically, often invoke it to characterize the arguments of their opponents: a debater argues based upon an unorthodox definition of some term and, when the argument is demolished by presenting the orthodox or widely-accepted definition, complains that his/her opponent is "moving the goalpost." Surprisingly, this sort of thing can happen even when the user of the unorthodox definition has stated right out that the definition is unorthodox. This is a form of hanging a strawman by attempting to set an unreasonable goalpost for your opponent, which you can then later either say they did not meet the standard of evidence for or that they moved the goalpost to prove something simpler.

A specific example is the accusation of goalpost-moving against proponents of evolution, when they state that the theory of evolution is not supposed to explain the origin of life. Although some features of natural selection are thought to be key in abiogenesis, the theory of evolution has never been about explaining how life began. That evolution was an explanation of diversity was made clear even in the earliest forms of the theory put forward by Charles Darwin in the 19th century. In the case of this accusation, the goalposts have not been moved at all by "evolutionists", but by the creationists who unrealistically want a theory to explain something it's not supposed to. The crocoduck is another example of this. By claiming that evolution can't be true unless you find something that evolution predicts wouldn't happen, opponents of the science can later point out that you haven't met their bogus standards or you have somehow changed your argument because it doesn't match their caricature of it.

Sometimes, "goalpost moving" happens because the original standard is realized to be incomplete in some way; for example, asking for documentation of a contested historical event… and then needing to ask for non-forged documentation; or a claim that no product exists in a certain setting that can easily kill fleas on cats… and then needing to clarify that the product must also leave the cat alive.

A famous example of this: Plato had defined humans as animals, bipedal and featherless. Diogenes

plucked a fowl and brought it into the lecture-room with the words, "Behold Plato's man!" Plato, in response, added "with broad nails" to the definition.[4] Assuming Plato was attempting to find a simple way to describe "human" in a general classification system, he was entirely non-fallacious in this addition.

In professional American football, the goalposts were literally moved on several occasions. The first was in the 1930s on the suggestion of George Preston Marshall

when they were moved from the end line ten yards into the field onto the goal line. Later the short-lived WFL (World Football League

) who set out to challenge the NFL for major league status but folded after two seasons, moved the goal posts back to the end line and abolished the kicked extra point. The NFL would follow suit on the former a couple of years later and is currently discussing the latter, though another moving of goalposts was also seriously proposed.