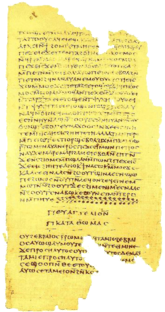 Fragment of the Gospel of Philip

The Gospel of Philip is a gnostic text lost[Note 1] to generations of Christians from the 2nd century CE when it was likely written, to the 20th century when it was rediscovered.

Philip had been rumored in Christian scholarship since roughly the 3rd century as "that book", which, along with the Gospel of Judas, pretty much put to shambles the Pauline views of Christianity.

A mostly complete scroll of the Gospel was found in the Nag Hammadi texts, uncovered in 1945. And no, Philip didn't write it, his name was just more famous than Joe the Scribe.

Because people in power don't like it when the God they worship (and get fellow money-donors to worship) says, "You priests and church are not needed."