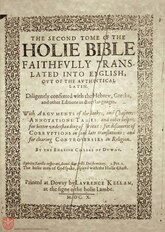 The second volume of the Douay-Rheims, 1610 edition

The Douay-Rheims is a Catholic translation of the Bible into English, completed in its original form in 1609. It was the work of Catholic scholars who fled from Protestant persecution in England to France, where they founded English-speaking Catholic colleges. The New Testament was translated by the Catholic college at Rheims (nowadays generally referred to as Reims), first published in 1582; while the Old Testament was published in 1609-1610 by the Catholic college at Douay (nowadays spelt Douai), hence the name Douay-Rheims.

However, what is commonly called the Douay-Rheims nowadays is not this original translation completed in 1610, but the revision thereof by Bishop Richard Challoner published in 1749 (with subsequent editions in 1750 and 1752). The original Douay-Rheims, without Challoner's revisions, is not in common usage.

The Douay-Rheims version included the entirety of the Catholic canon, including those books rejected by Protestants. It also included the Clementine Apocrypha, the Prayer of Manasses, 3 Esdras (which the KJV calls 1 Esdras), and 4 Esdras (which the KJV calls 2 Esdras). These three books are not considered by Catholics to properly form part of the Bible, but were deemed worthy of historical preservation.

The Douay-Rheims differed from many earlier English translations in its preference for borrowing words from Latin, instead of using native English words. Part of the reason for this was that, in that period, English did not have the precise vocabulary which Latin possessed, so that English translations required the addition of extra words, or explanatory notes, to make the meaning of the English as clear as that of the Latin original; but the authors of the Douay-Rheims translation saw this insertion of additional plain English words as a means of inserting the translator's agenda, which they sought to avoid. The translators of the KJV used the Rheims New Testament of 1582 as a source for the KJV; they adopted some of the Latin borrowings from the Rheims NT, but avoided other more inkhorn ones. The KJV thus sought to strike a medium between the non-Latinate extreme of earlier English translations and the definitely Latinate extreme of the Douay-Rheims. As a result, many of the borrowings from Latin devised by the Douay-Rheims translators eventually came, through the KJV, to be considered standard English.

However, due to the obscure Latinate vocabulary of the original Douay-Rheims, it is very much incomphrehensible to modern readers, or even readers of its own day who were not familiar with Latin. Thus, Challoner in his revision removed much of the more obscure Latinate vocabulary, and also modernised the spelling and the grammar. Challoner undertook his revision with reference to the Latin Vulgate, but also he drew much of his wording from the KJV. Thus, as much as the Douay-Rheims influenced the KJV, in the Challoner revision the KJV came to influence the Douay-Rheims.

The Douay-Rheims-Challoner was the primary Catholic translation of the Bible into English up until the middle of the 20th century, when it came to be replaced by newer Catholic translations. Some traditionalist Catholics, however, still prefer it. It is also a useful resource for English speakers trying to understand the Latin Vulgate, since in many parts it is a reasonably literal translation of the Latin, while other English Bibles (being based instead on the Greek or Hebrew) give widely different readings from the Latin.