From RationalWiki
< RationalWiki:Requests for user rights
Jump to: navigation, search
This is an archive page, last updated 10 May 2018. Please do not make edits to this page.
Archives for this talk page: <1>, (new)(back)

As per the community standards tech user rights can be requested from the Operations Manager or other sys admins of the RatioanlWiki website. This page can be used to request tech users rights by users.

Hi I'd like to be a tech I know how to right computer progrums and I like lookung at the internets free of trolls. And I'm alright with regular expressions. The capslock key on all my computers is mapped to control. I write my legal briefs in vim with LaTex. I replaced opiates with World of Warcraft. I run a Hackintosh. I make ASCII art, mostly penises. Etc. 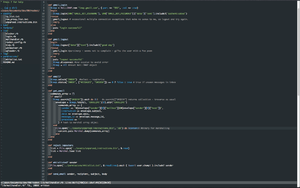 A LAWYER WHO CAN WORK A COMPUTER. He might destroy the WORLD if we're not careful. Obviously an excellent candidate - David Gerard (talk) 01:02, 14 February 2013 (UTC) 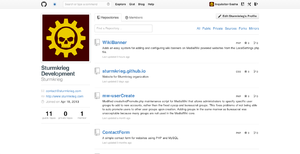 I would like to be a tech to help contribute to Rational Wiki. I have intermediate PHP scripting skills, and I'm working on improving that as well as looking to learn Javascript soon. I also have good CSS and HTML skills. I'm also good with connecting things and coming up with solutions that require creativity. I've assisted with managing websites for organizations IRL, one minor example of which is the Sturmkrieg Administration Committee, which I am the primary sysadmin for. I have skills with eunuchs file systems. I set up and manage a VPS server and have three years of server side experience with MediaWiki. I have a basic understanding of MySQL commands, though I find them easy to learn and I can use MySQL from the command line though I prefer PHPmyAdmin. I also set up and run Linux on a personal computer. My Mac terminal also looks like the Fallout 3 terminal. I also have experience with Vim and Nano, Vim being my primary command line text editor. I manage the Sturmkrieg server completely from the command line without a control panel (I blame most webhosting control panels for the monumentally stupid security compromising extensions that people make) and also because I prefer SSH to SFTP. I've also worked on several extensions (nothing major) mainly as practice and have a few works in progress. The skin that Sturmkrieg uses is separate from Vector and designed by myself. I also have an interest in learning new skills and solutions. I'm also working on contributing to the source code of MediaWiki. More specifically, I'm working on giving greater flexibility of user input to maintenance scripts. –Александр(а) (Talk | Contribs | Ragebox) 08:59, 18 August 2013 (UTC)

Given that this guy is involved in a few interpersonal conflicts with other users, and his general tendency towards Manichean crusades, I don't think it's a good idea.--ZooGuard (talk) 14:24, 18 August 2013 (UTC)

Eh, it's not a position of responsibility that's easy to get very far abusing. Trent and David are the gatekeepers. But the bigger point is that the tech role is absolutely limited to on-wiki stuff - it's mostly about the MW space. Anyway, Trent or David will see this.

I'm also dropping the problems I have and working on understanding other people's points. Plus when I get serious responsibility I get serious about it. For example, when dealing people on Sturmkrieg who were cyberbullying my friends. I could have brought down exterminatus on them, but I stayed professional. Privileged information stays confidential. –Александр(а) (Talk | Contribs | Ragebox) 17:18, 18 August 2013 (UTC)
If it's all on wiki stuff, than I don't see it being an issue. I'm not going to do stupid stuff like vandalize user CSS pages, which would obviously be abuse. –Александр(а) (Talk | Contribs | Ragebox) 17:44, 18 August 2013 (UTC)

"Sturmkrieg" and your bigotry tracking stuff really put a lot of people off and they ready have problems with your behavior on RW. Techs don't have authority to "exterminate" users. God that's creepy. Just FYI.

To clarify, I'm not talking about "exterminating" anyone. Exterminatus is when when a planet is firebombed and nerdspeak for blowing the frak out of sth or going ape in some way. Sturmkrieg is not associated with my own personal projects. –Александр(а) (Talk | Contribs | Ragebox) 22:29, 18 August 2013 (UTC)

AS a volunteer based project people stepping forward and wanting to help is always appreciated. There are multiple projects going on right now on the technical end of things that require various levels of expertise/access. My job is to facilitate volunteers towards projects that need doing and that they can and want to work on, and providing the tools needed to accomplish those jobs. Before turning any tools over, whether on wiki or other places, I like to have an idea of what role and what you want to work on. Are there particular ideas you have that you want to implement, or are you just looking to help out where we need it? If the former can you provide some details, if the latter we should communicate via e-mail about what needs work and see what would be a good fit. Tmtoulouse (talk) 18:21, 18 August 2013 (UTC)

One thing I'm interested in is working on new MediaWiki Vector skins. Not to set as the default skin, but maybe something to include as options. We could change the default skin if users thought that one of the other ones was better, but I'm not going to advocate for it. I could handle some of the technical stuff for users on the wiki such as user name changes or system message changes. For example, I could work on setting the design settings of templates on the skin CSS pages so that templates can have a specific appearance for each skin. It's not much of an issue with standard MW skins that are included, but it would be good if we have skins in different colors. If there's any other jobs I'm open. –Александр(а) (Talk | Contribs | Ragebox) 00:08, 19 August 2013 (UTC)

If your primary interest is in working on site then the tech user group is reasonable. I don't believe we have a set tech guide written yet, something to add to my to-do list. But in general anything that is not a bug fix or that will alter the aesthitics or feel of the site should go through a community approval process. Anything that edits the common files should be extensively debugged before implementing live. The tech user rights containts many of the rights of the moderator position but those rights should never be used out side of their need to fix techinical issues on wiki. And thanks for your offer to help!. Tmtoulouse (talk) 16:14, 23 August 2013 (UTC)

I'm a software developer by trade with a desire to help with filters and possibly bots. I throw myself to the wolves for consideration. Zero (talk) 18:08, 12 March 2014 (UTC)