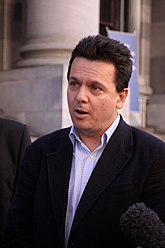 Nick Xenophon was an independent Australian Senator, representing the state of South Australia. He founded the party named after his own name (because it seems to be the fashion of the moment in Australian politics). Before his entry into the Senate, he had previously served as a member of the South Australian Legislative Council. He is known for his publicity stunts, and his centrist brand of populism.

More recently, he has found himself in the role of kingmaker in the Senate. In some ways, this is a good thing. In others, it isn't.

His arguments on gambling are good. He was very loud about the problematic nature of the Church of Scientology, and proposed that churches and religious institutions should not be tax-exempt unless they can show actual charitable works.[1]

He also, between 2013-2016, has a very solid record of voting against the worst of the Tony Abbott-Malcolm Turnbull Government's agenda. He voted against the majority of budget cuts proposed in the 2014 Federal Budget, and also voted against the deregulation of universities.

He voted to repeal the carbon tax price, and in support of the Abbott Government's direct action policy, before backtracking and stating that the plan had been "neutered" because of changes made to it via regulation.

He also voted to support the reintroduction of temporary protection visas.

He is also a proponent for so-called 'wind turbine illness'.