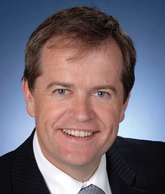 "Electricity Bill"[1] Shorten (1967–) was leader of the Australian Labor Party until his resignation in May 2019. With the Labor Party being in opposition during his tenure, Bill Shorten served as 'Leader of the Opposition' in the Australian Parliament — though one would have been forgiven for thinking otherwise. He is also known for his rather cringeworthy 'zingers'.[2]

Mostly he suffered from being the compromise placeholder after the Labor Party burned out everyone suitable for the job between 2007-2013. Labor fans desperately wanted him to grow a spine by the '16 election, lest this empty suit get trounced by Malcolm Turnbull and kicked out for yet another ambitious backstabber. Despite losing the election, he increased his margin sufficiently to stay in the job.

When Turnbull was replaced by Scott Morrison, Labor under Shorten led polling for two and a half years roughly. It looked like Labor would finally return to power... and then Morrison won, an upset comeback that shook Australia to its core. It was so bad of a loss, Shorten resigned as Labor Leader, and he would be replaced by Anthony Albanese.

Bill Shorten has spoken strongly in support for same-sex marriage rights. He addressed the Australian Christian Lobby, stating that the prejudices of the Christian Right against homosexuality "do not reflect the Christian values I believe in" and that he "could not agree" to people "hiding behind the Bible to insult and demonize people based on who they love".[3]

Shorten has also come out strongly in support of public education[4] and healthcare — but this is pretty much a given that this is the Australian Labor Party that we're talking about here.

He also called Senator Cory Bernardi a homophobe. But then again, who hasn't.

He became the first major party leader in Australia to openly and explicitly criticize trickle-down economics during the 2016 election, standing against cutting corporate tax. However he still went on to vote for the tax cuts for high income earners and largely remains in the neoliberal camp (as a member of Labor's "Right" faction).

Under his watch, the Labor Party supported the implementation of metadata retention, mainly due to the Liberal Party's parroting it as a 'national security issue'. He also supported draconian National Security Legislation; which was ultimately used by the Government led by Tony Abbott as a means of scaremongering.[5]

Shorten also ultimately backed slashing the Renewable Energy Target with his and his party's initial support for keeping the existing RET being only lukewarm at best.[6]. He also backed the slashing funding to the Australian Renewable Energy Agency (ARENA), along with cuts to social welfare and a tax cut for high income earners, despite having the numbers with the Senate cross-bench to block these cuts.

Shorten has been pretty much in lockstep with the Coalition government when it comes to offshore processing of asylum seekers.

He also, despite echoing from state leaders from both the Liberal Party and the Labor Party, still continues to support the indefinite detention of refugee women and children on Manus Island (Papua New Guinea) and Nauru.