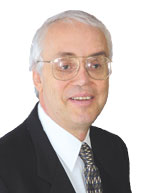 Carl Wieland (1950–) served as the Managing Director of Creation Ministries International (CMI). In keeping with the stance of that organization, he is an evangelical Christian and a young-Earth creationist.[1]

Wieland, who trained as a medical doctor at Adelaide University in South Australia, ceased practising medicine in 1986 prior to forming CMI after he crashed head-on into a fuel tanker and spent nearly six months laid up in hospital.[2]

He wrote extensively for two of CMI's magazines, the prole-feed vehicle Creation and the pseudo-scientific Journal of Creation; he also became a popular figure on the creationist lecture-circuit.

Wieland was a key player in the schism that saw CMI separate from its former parent-organization, Answers in Genesis in 2005. For a while there, Wieland and Ken Ham went on like two first-graders in a schoolyard, with Ham stealing CMI's magazine subscription-list and substituting an Answers in Genesis publication, and then Wieland accusing Ham of theft and moral failure.[3] You just can't make this stuff up. The dispute, widely reported, unmasked the unsavoury and inbred microcosm of the fringes that represent young-earth creationist belief.[4][5]