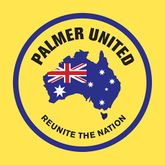 The United Australia Party (formerly The Palmer United Party, self-named after Clive "national living treasure" Palmer), is a political party in Australia who, unfortunately, hold significant sway in the Australian Senate. It is also known for its atrocious, hard to look at, website given that its two primary colours are yellow on a white background.

The United Australia Party drew its support from typically uneducated, working-class, politically disinterested Australians who are easily sucked in by Clive Palmer's "everyday 'Strayin" rhetoric. In other words, they are basically the same type who support One Nation - which is clearly evident given that its support is most potent in Queensland. Even though Palmer's immigration policy (see below) aligns somewhat closer to that of the Australian Greens, on face value at least.

According to the party's website, its policies are as follows.

This politics-related article is a stub.
You can help RationalWiki by expanding it.
Retrieved from "https://rationalwiki.org/w/index.php?title=Palmer_United_Party&oldid=2454333"
Categories:
Hidden categories: