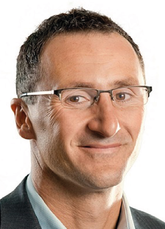 Dr. Richard Di Natale is a former leader of the Australian Greens, a position he held between May 2015 and February 2020, when he stepped down from leadership and was succeeded by Adam Bandt. He was elected into the Australian Senate in 2010. Before this, he was a GP and medical doctor.

Despite being a leader of a significant party in Australia; very few people outside of the Greens; and even then, arguably some within the Greens as well, actually knew who he was before he became leader (many still don't). After his elevation to the Greens leadership, he gained a reputation as being someone, when compared to previous Greens leaders, who was willing to negotiate with the government in order to achieve common outcomes. Because these negotiations took place with the conservative Liberal/National government, this drew ire from many within the Australian Labor Party among others, some even accusing him of being a "Liberal in disguise", even though he and other Greens MPs continued to criticise the government on an almost daily basis and also continue to vote against them the most often on the floor of parliament.[1]

The irony is that many of these same people who complained about Di Natale "jumping into bed with the Liberals" and "compromising" to achieve their own policy outcomes, even if partially, had also previously complained that the Greens had been "too ideologically pure" under Bob Brown or Christine Milne's leadership. Go figure, right?

Being a doctor, it should be no surprise that Di Natalie is in favour of ending the war on drugs and treating drug use as a health issue, rather than a criminal issue.[2][3] In 2016, the Greens officially changed their policy on this matter, reverting back to their pre-2010 position on illicit drugs to considering drug legalisation on a case by case basis.[4] For example, Di Natalie himself has stated on a number of occasions that the legalisation of marijuana for recreational use is a "discussion that Australia needs to have".

In a Reddit AMA, Di Natale stated that he is opposed to nuclear power, but that this opposition was "thoroughly pragmatic".[7] He stated that "for Australia to start a nuclear power industry from scratch would require billions of dollars, a decade's time, and the importation of massive amounts of skill and material from overseas" and that Australia is well situated for wind, solar and tidal power generation and that "Australia could be powered sooner and far more cheaply with renewables".

Di Natale also challenged the Greens long-standing opposition on genetically modified foods,[8][9] though he was forced to back away from this due to backlash from members of his party.

Di Natale proved to be an effective negotiator who was willing to not be drawn on ideological lines with the conservative Abbott and Turnbull governments. Even though he and other Greens MPs criticised them on a near daily basis, this didn't stop rusted-on members of the Labor Party and its blind followers from accusing the Greens of being sell outs. Naturally, this also drew the ire of moonbats within his own party who would rather sacrifice electability in the name of fringe ideology and purity.

In the first instance, the government sought to wind back the pensions assets test threshold. Now, if one were to believe the Labor Party, the Greens sold out pensioners by supporting the Liberal cuts to pensions. Naturally, Labor whipped up a massive fear campaign and opposed the changes. In reality, the changes only affected retirees with assets in excess of $800,000 (who would no longer receive a pension), and the assets test didn't even include the family home; while others in lower asset brackets actually got pension increases.

The next big one was on multinational tax disclosures. The Greens negotiated with the government to see multinational companies earning more than $200mil a year to disclose their tax records. Labor wanted this threshold down to $100mil, and this is where shit hit the fan. Because Labor didn't believe that something was better than nothing; they voted against the negotiated legislation and whipped up another scare campaign claiming that Di Natale 'sold out' on multinational tax avoidance. Naturally, Di Natale and other Greens MPs went to great lengths to explain that the lower house is controlled by the government and that they wouldn't approve of the $100mil disclosure threshold. This also reportedly resulted in a 90% Labor to Greens voter conversion rate from Labor supporters who contacted the Greens offices to complain about their 'dirty deal' — of course, Di Natale and others bragged about this and goaded Labor about it too.

The next big piece of legislation negotiated was reform to how Senators are elected, namely, to remove the group voting ticket system and allow voters to direct their own preferences above the line, and to make it easier for voters to direct their preferences below the line. Labor, which originally supported the changes before they were introduced as legislation, had a brain snap and decided that allowing voters to direct their own preferences was a bad thing, and decided to oppose the legislation for the purpose of cheap political point scoring, and affectionately labelled Di Natale and the Greens as 'opportunists', 'power grabbers' and 'frauds' — despite the fact that Senate voting reform had been Greens policy for well over a decade. Naturally, none of the mud stuck.

Following the 2016 Election, the issue of the backpacker tax came before the Parliament. After a stalemate, the Richard Di Natalie and the Greens negotiated with the Turnbull Government to have a 15% backpacker tax pass (else it would have gone up to 32.5%), in exchange for $100M dollars being invested into LandCare. Then, in response to this, came the usual mud slinging from the Labor Party about how the Greens were "sellouts" and that the Government doing a deal with them (on 10.5%) would have saved the budget money. Yes, that's right: the Labor Party is complaining that additional money is being put into an environmental [[[conservation]] program that they founded.