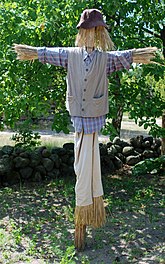 The straw man appears to be one of the most frequently mentioned fallacies on the contemporary Internet. Sometimes, supposed examples can themselves be straw men, i.e. if one claims something is a deliberate straw man, and it isn't, then you yourself are creating a straw man.

Most of these names rely on the notion that the argument proposed can be easily knocked down. An "Aunt Sally" is originally a hollowed out coconut at a British fair, often with a face painted on it, which is set up in order to be knocked or shot down for a prize. 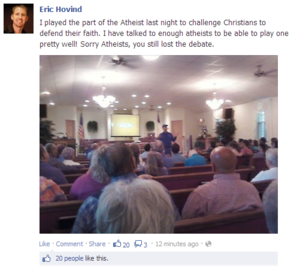 In the political sphere, the easiest way to construct a straw man is through the generous application of stereotypes. By making the assumption that a politician believes in all the ideologies associated with their general political leaning, they can be dismissed more easily. For instance, assuming a fiscal conservative is also socially conservative or assuming a pro-choice politician is also in favour of extreme wealth redistribution are common fallacious straw men that are made by politicians, pundits and voters themselves. For the left, a common straw man is assuming that anti-abortion advocates must be "pro-life" on all issues (such as opposing capital punishment), not just abortion, and calling them hypocrites if they are not (although some anti-abortionists advocates do oppose both).[citation needed] This is no more true than the example of pro-abortion advocates having to favor choice on all issues, not just abortion. The same is true of conflating ideologies, such as stating that liberalism, socialism and communism (two of which are economic systems, the other being a form of thought in support of capitalism) are identical (a rhetoric notoriously popular in the US).

Particularly on the internet, it is easy to create a straw man argument about the feminist movement by jumping to generally inaccurate conclusions and cherry picking (particularly involving extreme views held by a minority). Such arguments include platitudes like "feminists want women to rule over men" or "feminists are 'reverse sexists'". This almost inevitably involves either the invocation of the microblogging platform Tumblr or the invocation of Andrea Dworkin (to which the misattributed quote "all heterosexual sex is rape" goes), but not often the invocation of her genuine positions.