From RationalWiki
(Redirected from Beg the question)
Jump to: navigation, search
Not to be confused with the unrelated expression that something "begs the question" (as in, "invites a follow-up question").

Circular reasoning (often begging the question) is a logical fallacy that occurs when the conclusion of an argument is used as a premise of that same argument; i.e., the premises would not work if the conclusion weren't already assumed to be true.

The fallacy is an informal fallacy. The phrase "begging the question" comes from a bad translation of the Latin phrase petitio principii, literally a(n) application of/request (or beg) for the premise.

X is true, because X is true.

A implies B, which implies A, which …

Begging the question is often considered synonymous, though sometimes is distinguished as following the form:

A circular explanation (or "vacuous explanation") occurs when the explanation for an event is essentially the event itself.

For example: "This sedative causes sleep because of its dormitive virtue."

We shall prove that God exists:

Here, it is assumed that God exists in order to satisfy the premise that "God's Creation" is evidence of his existence. There is no standalone argument here that connects existence to God's creation except the conclusion, which is that God exists. Note the slight structural differences in the argument to simple circular reasoning — the order of the world isn't implied by God's existence, but trying to use it as evidence of God's existence must assume he exists in the first place.

Bible is the word of God[edit] 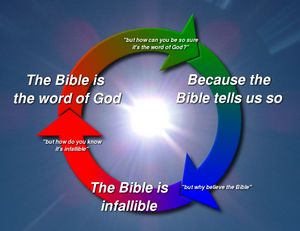 A common example of circular reasoning: the Bible.

More God stuff now. This one is so mind-blowingly circular that you'd think it's a straw man. However, most Biblical literalists use the Bible as their main proof of God, and using the Bible as any form of evidence for God must assume the following circular argument.

This may be a problem for Protestants whose rule of faith is the Bible, though not for Catholics who claim that the infallibility of Sacred Scripture comes from the authority of the Church given by a truthful and good God to a people who need positive revelation as a firm guide in life, though what that claim is based on, bar the Pope said so (itself perilously close to begging the question) is rather hazy.

Faith may be defined as belief unsupported by evidence. To justify his religious faith, that world-champion question begger, Paul of Tarsus, offers the following rationale:

In other words, the argument boils down to this:

Albeit, in addition to "substance", the Greek word "hypostasis" can be translated as "assurance", "being sure" or "confidence"; also, in addition to "evidence", the Greek word "elenchos" can be translated as "conviction" or "being convinced". This would allow Hebrews 11:1 to be rendered as: "Now faith is the confidence in (or being sure of) things hoped for, the conviction for (or being convinced about) things not seen." Such a translation would be more of a morale boost than an attempt at constructing proof.

This argument has actually been made by several different people, one of them being Dinesh D'Souza. They tend to try to bolster these types of arguments by saying things like, "How could the Gospel writers have gotten away with claiming this if it didn't happen? Wouldn't someone have called them on it?" Oddly enough, pointing out that these accounts were written generations after the supposed miracles happened, in a time when ready communications weren't reliably available, has little effect on the bullshitter individual putting forth this argument.

See the main article on this topic: Presuppositionalism

Admittedly, more advanced theologians — well, anyone smart enough to use the word "theologian"[note 1] — aren't this stupid, and some creationists and literalists do try to prove the Bible though other means. However, this usually tends towards Christian Science rather than good scholarship. In a variant used by Jason Lisle — of all creationists, a man who certainly should know better — he states the same thing as:

Sure, the first premise comes directly from Lisle's special place, but it also assumes that not only is there a connection between logic and the Bible's truthiness, it must assume the Bible is infallibly true to make such a connection in the first place. Remarkably, those premises as stated aren't paraphrased at all. Of course, this isn't the only example of extreme circularity in Lisle's work (and he's only one of a number of creationists). In his proposed anisotropic synchrony convention (a shamelessly plagiarised attempt to circumvent the starlight problem) the actual content of the science becomes meaningless as his underlying reasoning is that the Earth is 6000 years old because his convention says it is, and the usual speed of light conventions cannot possibly be right because such conventions imply that the world is older than 6000 years. Most flood geology works along similar lines. It first assumes the Earth is 6000 years old in order to reject all established geology, biology and physics, and then uses new conventions to show that the Earth must be 6000 years old, thus simultaneously validating both their beliefs and methodology.

Why does the Bible get special treatment? The problem with fallacies is that you can also prove a contradiction.

The premise 'something can't come from nothing' assumes the Big Bang, being a something that came from nothing, never happened. Therefore, the conclusion is assumed in the premise.

See the main article on this topic: Intelligent design

See the main article on this topic: Argumentum ad dictionarium

One of the ways that circularity appears is whenever someone tries to argue a point "by definition". Simply put, if you can define your terms any way you like, then you can conclude anything you like without deriving anything new — hence it's circular. It's very simple to do, and doesn't always require someone running to a dictionary to do it. Consider the cosmological argument for the existence of God, which postulates that there must be a some kind of uncaused cause that brought the Universe into being. While this alone doesn't prove any particular god — Allah, Yahweh, Brahman, and so on — and theologians most likely know this, it can be used as proof if this first cause is God "by definition". However, this makes the logic as follows:

Simply substitute "God" for something with fewer religious connotations and it would easily highlight the bizarre circularity. Nothing stops us replacing "God" with the Invisible Pink Unicorn precisely because the argument is constructed almost spherically. In terms of mathematics, the equivalent would be declaring the solution to be X, where X defined as an operation or series of operations resulting in the correct answer; it is simply placing a name on the unknown.

See the main article on this topic: Tautology

Circularity is fallacious when used in an argument. However, if one wishes to define a word, one must use other words to do so. If one then defines those words in terms of other words, and those words in terms of other words, and so on, one must, since there are a finite number of words, eventually reach a point where there are words that are defined in terms of each other, and thus the definition is in some sense "circular". This phenomenon is inevitable and not necessarily fallacious; the issue is whether definitions are presented as "this is what I mean by these words" or "this is a statement about the world". The latter is fallacious, while the former is not.

So, above, the definition is taken to not merely define the concept of "God", but to speak to God's existence, and is therefore fallacious. On the other hand, consider the following argument made against evolution: "Evolution says that more fit organisms will out-reproduce less fit organism. However, 'fitness' is defined as the property of being able to out-reproduce other organisms. This is circular." Since evolution is merely presenting the definition of "fitness", and is not asserting that it has proved anything about the actual world, this definition of "fitness" is not fallacious. Every area of study can be presented as making similar statements, for instance "Christianity says that God created the universe. However, 'God' is defined as the creator of the universe." Or "Physics says that acceleration is equal to force divided by mass. But force is defined as mass times acceleration."

A circular argument does not prove that any of the statements involved are true, but it does prove that they are equivalent; that is, all of them have the same truth value (either all are true, or all are false). This in itself can be useful. Consider an n × n matrix A. All of the following statements can be proven:

Proving these statements does nothing to establish that A is invertible. It does, however, mean that "the column vectors are independent", "A is invertible", "A has a non-zero determinant", "the dimension of the null space is zero", and "the column space has dimension n" are all basically the same statement, and only one needs be checked for any particular matrix; which is certainly a useful result.

Often, people beg the question without being consciously aware that they are doing so. They have so thoroughly internalized a belief that they are not able to rationally evaluate it. When a person has been taking something for granted for a long time, it's difficult to not think that it's "obviously true", and in no need of justification. Trying to remove such a premise from one's thoughts and reason without it can be difficult; take, for instance, many people's attempts to reason in a number system in which A×B is not the same as B×A.

Often, denying a circular argument can leave one open to accusations that oneself is actually the one engaging in a circular argument. Such an accusation can be the result of one's opponent being devious, or simply being so lost in their own nonsense that they are unable to reason rationally on the subject. 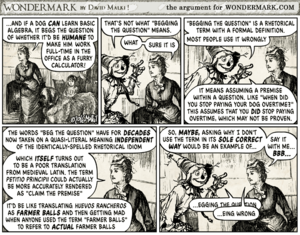